World War III Weapons: How Russia and America Would Have Fought 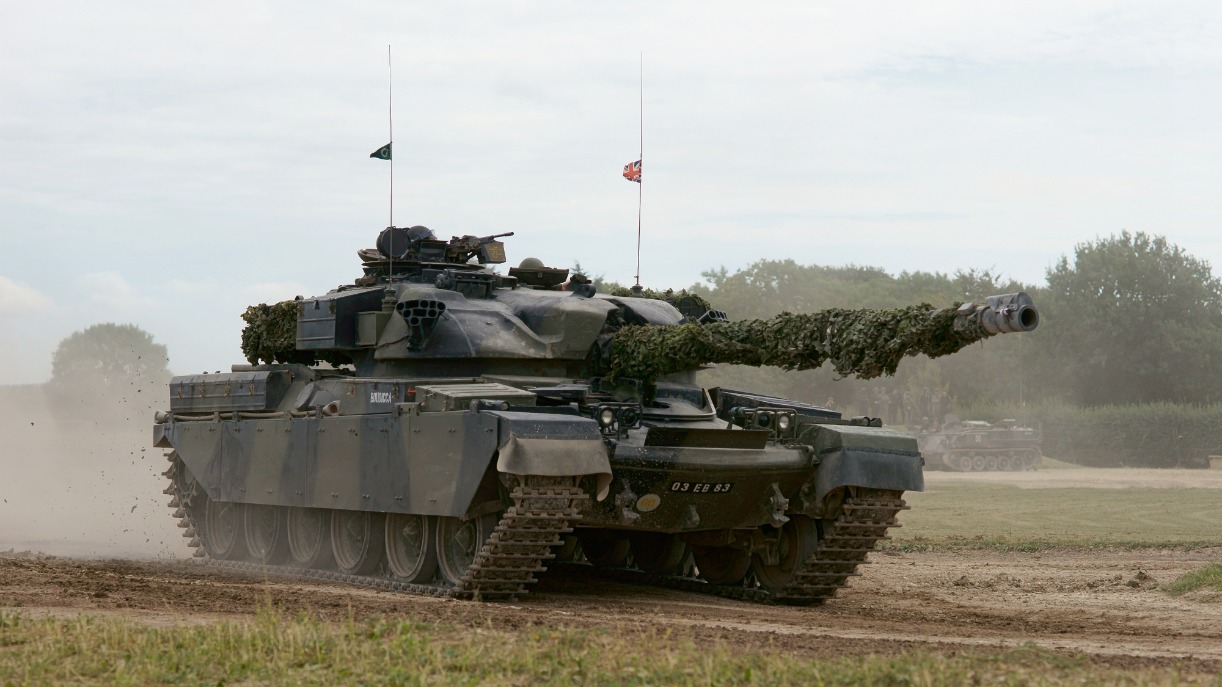 Here’s What You Need To Remember: The British Chieftain was one of the most pow­er­ful tanks of the Cold War period. At the time of its intro­duc­tion in 1966, it was the largest, most heav­i­ly armed main battle tank on either side, NATO or the Warsaw Pact.

The Cold War was a unique­ly dan­ger­ous period in human his­to­ry. Vast ide­o­log­i­cal dif­fer­ences, large stand­ing armies and nuclear weapons on hair trig­gers meant the end of civ­i­liza­tion was an ever-present threat.

For much of the era, there was gen­uine fear that war between the West and the Soviet bloc might break out any time. Such fears pushed the rapid devel­op­ment of weapons to give each side an advan­tage should the Cold War sud­den­ly turn hot. The result was not one but many arms races pur­sued con­cur­rent­ly, from infantry small arms to nuclear weapons.

New equip­ment and capa­bil­i­ties were rapid­ly field­ed by both sides. By the 1950s, most air forces had traded in pro­peller-driven air­craft for jets. Armored vehi­cles, sub­marines, and mis­siles saw huge gains in effec­tive­ness. Nuclear weapons in par­tic­u­lar were made small­er and expo­nen­tial­ly more pow­er­ful. Above all, weapons were made more lethal to give each side an edge in what might very well have been the last war human­i­ty would ever fight.

The pace of nuclear weapons devel­op­ment during the Cold War was breath­tak­ing. Construction began on the first true bal­lis­tic nuclear mis­sile sub­ma­rine, USS George Washington, just 12 years after the atomic bomb­ings of Hiroshima and Nagasaki.

Advances in nuclear weapons minia­tur­iza­tion tech­nol­o­gy meant that the W-47 war­head car­ried by the Polaris weighed just 720lbs and was durable enough to be car­ried atop a mis­sile. The W‑47 had an explo­sive yield of 600 kilo­tons. By com­par­i­son, the “Little Boy” bomb dropped on Hiroshima just fif­teen years prior weighed 9,700lbs and could only be dropped by a strate­gic bomber. Moreover, despite its phys­i­cal size, Little Boy had an explo­sive yield of just 15 kilo­tons.

The Avtomat Kalashnikova model 1947 assault rifle, or AK-47 as it is more com­mon­ly known, is one of the most rec­og­niz­able weapons ever made. Its 30 round mag­a­zine and pierc­ing looks are rec­og­niz­able from Nicaragua to Vietnam, from the streets of Los Angeles to the streets of Mogadishu. The AK-47 is light­weight, durable and easy to learn to shoot. It’s also easy to use. Children can and, unfor­tu­nate­ly, often do use it in many con­flicts around the globe.

Soviet legend has it that the AK-47 was the brain­child of Mikhail Kalashnikov, a simple mechan­ic turned tanker during World War II who designed the weapon while con­va­lesc­ing from war injuries. A great nation­al­ist legend, the truth is prob­a­bly more com­pli­cat­ed, as the design shows obvi­ous influ­ences from the American M-1 Garand and German StG-44, the latter the world’s first true assault rifle.

Approximately 75 million AK-47s have been built, very likely making it the most pro­lif­ic firearm of all time. Many mil­lions of AK-47s con­tin­ue to be used around the world by armed forces, guer­ril­la move­ments and ter­ror­ists to this day.

The F‑4 Phantom fight­er bomber is a text­book exam­ple of the incred­i­ble speed of post­war avi­a­tion devel­op­ment. Flown just thir­teen years after the end of World War II, the F‑4 could carry a pay­load of up to 18,000 pounds of ord­nance — nearly as much as the B-29 Superfortress strate­gic bomber. And it was a fight­er.

The F‑4 was devel­oped and man­u­fac­tured by McDonnell Aircraft — today a part of Boeing. Flown by the U.S. Air Force, Navy and Marine Corps, as well as allies includ­ing Germany, Japan, Israel and Turkey, it was a large, twin-engine fight­er with the ver­sa­til­i­ty to con­duct air supe­ri­or­i­ty, fleet defense, air defense sup­pres­sion, recon­nais­sance, inter­dic­tion and close air sup­port mis­sions.

F‑4 Phantoms have seen combat in American ser­vice over Vietnam, Iraq and Kuwait, with the Israeli Air Force in the 1973 Yom Kippur War, the Iranian Air Force in the 1980 – 88 Iran-Iraq War and in Turkish ser­vice against Kurdish insur­gents. The major­i­ty of F‑4s built have been retired, but a number still serve with the South Korean, Turkish, Iranian and other mil­i­taries.

Nicknamed “The Right Arm of the Free World”, the FN-FAL battle rifle equipped many NATO armies during the Cold War. A post­war design by the Belgian small arms fac­to­ry Fabrique Nationale, the FAL was adopt­ed by many armies to replace World War II-era infantry weapons.

The FAL saw exten­sive ser­vice in the West, as well as with many Third World armies in Central America, South America and Africa. It served on both sides of the Falklands conflict, equip­ping both the UK land forces and Argentine Army and Marine Corps. The design is now con­sid­ered obso­lete and most FAL rifles have been retired.

The British Chieftain was one of the most pow­er­ful tanks of the Cold War period. At the time of its intro­duc­tion in 1966, it was the largest, most heav­i­ly armed main battle tank on either side, NATO or the Warsaw Pact.

The Chieftain was an evo­lu­tion of the Centurion tank, which had appeared at the end of World War II.  Chieftain had con­sid­er­ably better armor than the Centurion and an improved engine. What really stood the tank apart from its con­tem­po­raries, how­ev­er, was the 120mm main gun. The L11A5 rifled gun was much larger and more pow­er­ful than the 105mm gun equip­ping American M60 tanks and 115mm gun equip­ping Soviet T-62 tanks.

Kyle Mizokami is a defense and nation­al secu­ri­ty writer based in San Francisco who has appeared in The Diplomat, Foreign Policy, War is Boringand The Daily Beast. In 2009 he cofound­ed the defense and secu­ri­ty blog Japan Security Watch. You can follow him on Twitter:@KyleMizokami. This first appeared in 2015.