What Were the Best Firearms of the 19th Century 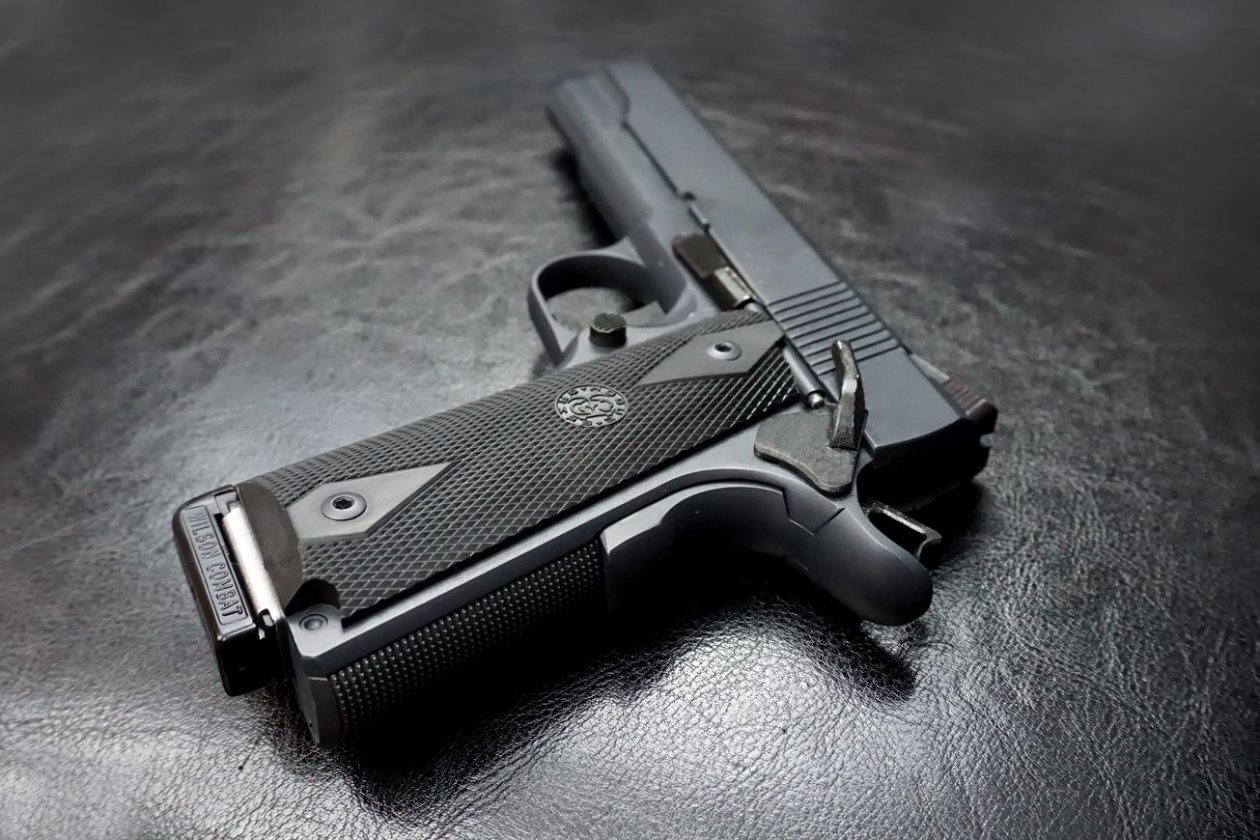 While every­one knows the inven­tions of Alexander Graham Bell, Thomas Edison and the Wright Brothers — even if there is some debate whether they were actu­al­ly the first to invent or the first to patent. Yet, no one knows exact­ly who invent­ed the firearm — all that is known is that its ori­gins in China go back more than 900 years. However, there are a hand­ful of inven­tors and inno­va­tors that stand out from the rest.

While every­one knows the inven­tions of Alexander Graham Bell, Thomas Edison and the Wright Brothers — even if there is some debate whether they were actu­al­ly the first to invent or the first to patent. Yet, no one knows exact­ly who invent­ed the firearm — all that is known is that its ori­gins in China go back more than 900 years. However, there are a hand­ful of inven­tors and inno­va­tors that stand out from the rest.

Technically French inven­tor Clement Pottet wasn’t really a gun design­er, but his con­tri­bu­tion to firearms remains truly sig­nif­i­cant. At the begin­ning of the nine­teenth cen­tu­ry even trained sol­diers could barely get off more than three shots a minute, but thanks to Pottet’s devel­op­ment of the centerfire cartridge, rapid fire was made a real­i­ty.

In fair­ness, Pottet had in essence built on the work of Charles Howard, who devel­oped the ful­mi­nates that were used in per­cus­sion caps; as well as the Joshua Shaw who patent­ed the caps that evolved into the primers used in metal­lic cased ammu­ni­tion — but Pottet was the vision­ary who made it prac­ti­cal. It took the Frenchmen more than twenty-five years — from 1829 to 1855 — to per­fect his design.

That in turn allowed Hiram Berdan of New York and Colonel Edward Boxer of the Royal Arsenal in Woolwich, England, to each inde­pen­dent­ly devel­op improved primers that trans­formed the way firearms could be loaded and fired. Centerfire ammu­ni­tion allowed for repeat­ing rifles and even the machine gun to be devel­oped — and while some­one else prob­a­bly would have gotten there, Pottet was the first.

As with many great design­ers Christian Sharps didn’t tech­ni­cal­ly invent as much as inno­vate, but the same could be said for Steve Jobs and Bill Gates. In the case of Sharps, he was an inno­va­tor second to none as his Sharps rifle became the first com­mer­cial­ly suc­cess­ful breech-load­ing rifle.

The con­cept dated back to the six­teenth cen­tu­ry but it took some 300 years for Sharps to be the guy on the spot to actu­al­ly make it work. From 1848, the year when he received the patent for the falling-block rifle design, until the com­pa­ny ceased pro­duc­tion in 1881, more than 120,000 Sharps rifles were pro­duced.

The Sharps car­bine was the most widely used cav­al­ry car­bine of the American Civil War, and it gave the Union forces a great advan­tage. At the time infantry were still lucky to fire three or four rounds a minute — but mount­ed troop­ers armed with the Sharps could fire eight to ten rounds. The firearm also saw exten­sive use in the American West both in the hands of sol­diers and fron­tiers­men.

Before his death in 1874 Sharps was award­ed a total of fif­teen firearms-relat­ed patents, includ­ing one for the Sharps Derringer, a four-barrel, single-action pistol that uti­lized a revolv­ing firing pin.

Samuel Colt: Much More Than the Revolvers that Bear his Name

Long before U.S. Steel, General Motors or IBM were found­ed there was anoth­er American com­pa­ny that became an indus­try giant: Colt's Manufacturing Company. Founded in 1855 it was actu­al­ly a suc­ces­sor cor­po­ra­tion to Samuel Colt’s ear­li­er firearms-making efforts that began in 1836. That longevi­ty and the fact that even non-gun owners likely know the name “Colt” says a lot about this American weapons pio­neer and busi­ness titan.

Samuel Colt is large­ly known for his revolvers, but it is a mis­con­cep­tion that he invent­ed the firearm. Here is anoth­er case where he was an inno­va­tor who took an exist­ing con­cept and per­fect­ed it. The Colt Paterson, which he intro­duced in 1836, pop­u­lar­ized the revolver with Americans and made him one of the nation’s wealth­i­est men.

If it were just the revolver design, Colt would still be among the most influ­en­tial gun design­ers, but his other con­tri­bu­tions were even more notable. He was among the first to intro­duce inter­change­able parts and an assem­bly line, which rev­o­lu­tion­ized firearms pro­duc­tion, but he also was a pio­neer in the use of celebri­ty endorse­ments, cor­po­rate gifts and col­or­ful ads to pro­mote his prod­ucts.

While known as a firearms design­er, Colt was a shrewd busi­ness­man who was among the first to suc­cess­ful­ly use adver­tis­ing, prod­uct place­ment and mass mar­ket­ing to sell his prod­ucts — and this would con­tin­ue after his death. Today the iconic Colt Single Action Army “Peacemaker” could right­ful­ly be described as the gun that tamed the West, and although it built on Colt’s designs it wasn’t devel­oped until 1873, more than a decade after his death. Yet, this firearm so asso­ci­at­ed with the Old West bears Colt’s name. That’s the power of mar­ket­ing, which Colt most cer­tain­ly had a hand in!

Among the many inven­tions from Richard Jordan Gatling include the screw pro­peller, a wheat drill for planting,a steam trac­tor and a motor-driven plow — but it was his Gatling gun that he is most cer­tain­ly remem­bered for today. Ironically, the weapon that was the first suc­cess­ful rapid fire gun was devel­oped not to kill more sol­diers, but rather to reduce the need for so many sol­diers on the bat­tle­field!

During the American Civil War, Gatling saw how more sol­diers died of dis­ease than from gun­shots and sought to devel­op a weapon that could super­sede the need for large armies and believed that deaths from dis­ease would be dimin­ished.

Technically not a "machine gun" in the modern sense, his rapid-fire, spring-loaded, hand-cranked Gatling gun was a fore­run­ner to the weapons that were to come. The Gatling gun’s oper­a­tion cen­tered on a cyclic multi-barrel design that allowed for its rapid fire, but also facil­i­tat­ed cool­ing of the bar­rels. Although the Gatling gun did see some lim­it­ed use in the Civil War it wasn’t offi­cial­ly used by the U.S. Government until 1866, and was used by the U.S. Cavalry on the fron­tier — how­ev­er, Lieutenant Colonel George Armstrong Custer chose not to bring his Gatling guns with his force at the time of the Battle of Little Bighorn. Gatling Guns were used by the U.S. Army in the Spanish-American War to great suc­cess. The Gatling gun was only declared obso­lete in 1911after forty-five years of ser­vice with the U.S. mil­i­tary.

Richard Gatling sold his patents to Colt in 1870, but remained pres­i­dent of the Gatling Gun Company until Colt absorbed it in 1897. During this tenure as pres­i­dent he devel­oped a ver­sion that replaced the hand cranked mech­a­nism with an early elec­tric motor, which allowed the weapon to achieve a rate of fire of nearly 3,000 rounds per minute.

“Whatever hap­pens we have got a Maxim gun and they have not.” Long before gang­ster rap­pers offered lyri­cal prose about Mac-10s and AK-47s, British poet Hilaire Belloc wrote those words above about the Maxim machine gun, which high­light­ed how iconic the weapon had become by the late nine­teenth cen­tu­ry.

As with Richard Gatling, Sir Hiram Stevens Maxim was an inven­tor who held numer­ous patents — and in the lat­ter’s case these includ­ed those for a mouse­trap, hair curl­ing iron and var­i­ous steam pumps. Maxim even laid claim to invent­ing the light­bulb and also exper­i­ment­ed with pow­ered flight; yet it was his gun design that the American-born, British inven­tor is now most remem­bered for. As the story goes he was told if he wanted to make a “pile of money” he should “invent some­thing that will enable these Europeans to cut each others’ throats with greater facil­i­ty.”

The con­cept of a machine gun came to Hiram Maxim when he was knocked over by the recoil from a rifle, and his design employed one of the ear­li­est recoil-oper­at­ing firing sys­tems. The con­cept remains in use today, where the energy from the recoil on the breech block is used to eject a spent car­tridge and insert the next one. The Maxim design could fire 600 rounds, allow­ing a lone sol­dier to have the fire­pow­er of an entire line of troops. The Maxim gun was intro­duced in 1883 and used by the British Army in numer­ous colo­nial cam­paigns. Variations of the Maxim design, made under var­i­ous licens­es, were used by the British, Russian, and German armies amongst others in the First World War. Maxim guns saw use in more than 100 con­flicts from 1886 to 1959 — making even more pro­lif­ic than the AK-47 would see during the Cold War.

– This Story First Appeared in The National Interest –