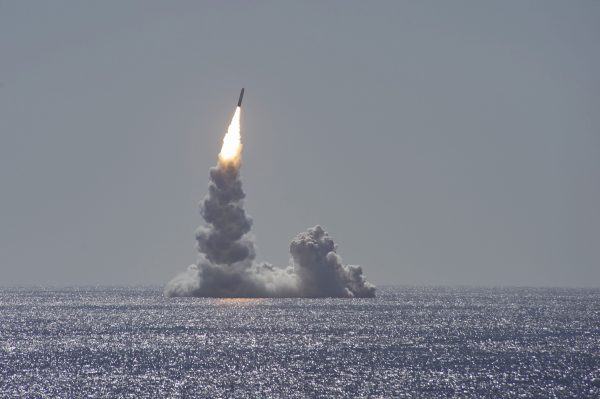 According to a U.S. Navy press state­ment, the launch was part of a so-called Demonstration and Shakedown Operation, des­ig­nat­ed DASO-30, and aims to “eval­u­ate and demon­strate the readi­ness of the SSBN’s strate­gic weapon system and crew before oper­a­tional deploy­ment fol­low­ing the submarine’s engi­neered refu­el­ing over­haul.”

The USS Maine com­plet­ed a three-year over­haul that includ­ed refu­el­ing of the boomer’s nuclear reac­tor at the Puget Sound Naval Shipyard in June 2019.

“The pro­fes­sion­al per­for­mance by the crew of the USS Maine today demon­strat­ed they are ready to stand the watch for our nation’s strate­gic deter­rence mis­sion,” said James F. Geurts, assis­tant sec­re­tary of the Navy for research, devel­op­ment, and acqui­si­tion, who embarked USS Maine for the launch, on February 12.

The February 12 launch marked the 177th in the line of suc­cess­ful flights of the Trident II (D5) SLBM.

“Today’s launch was con­duct­ed from sea, the mis­sile flew over the sea, and landed in the sea. At no time did the mis­sile fly over land,” the Navy said in a state­ment. “The mis­sile test was not con­duct­ed in response to any ongo­ing world events or as a demon­stra­tion of power. Test launch­es – includ­ing DASOs – are sched­uled years in advance.”

The four test launch­es were part of a Commander Evaluation Test (CET) with the pri­ma­ry goal of val­i­dat­ing per­for­mance expec­ta­tions of the SLBMs.

A pre­vi­ous DASO test launch of a Trident II (D5) took place in May 2019 when the USS Rhode Island fired an unarmed SLBM from a sub­merged posi­tion off the coast of Florida.

The U.S. Navy cur­rent­ly oper­ates a fleet of 14 Ohio-class SSBNs, each capa­ble of car­ry­ing up to 24 Trident II D‑5 SLBMs. Beginning in 2031, the Ohio class is slated to be grad­u­al­ly replaced by the new Columbia class. The Navy aims to deploy 12 Columbia-class boomers, designed for a 42-year ser­vice life all the way through 2085.