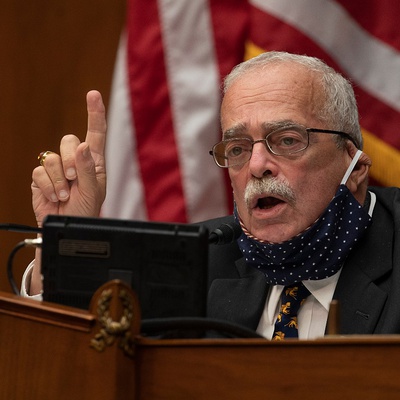 The battle over President Trump’s controversial order to strip the civil service protections from a wide swath of the federal workforce began on multiple fronts Tuesday, as Democratic lawmakers introduced a bill to rescind the order and a federal employee union sued to block its implementation.

In the days that followed, opponents of the initiative, who described it as a “stunning” effort to return the federal government to the spoils system of the 19th century, indicated that they were weighing their options to prevent the order from being implemented. On Tuesday, the National Treasury Employees Union and House Democrats announced their first steps in that effort.

NTEU has filed a lawsuit against the president in the U.S. District Court for the District of Columbia, accusing Trump of exceeding his authority in signing the executive order and seeking an injunction to block the creation of Schedule F. Although the union acknowledged that the president has the power to exempt positions from the competitive service, NTEU argued he did not meet the legal bar to justify the actions laid out in his directive.

“[The] order justified exempting such positions from . . . adverse action protections by asserting that ‘removing poorly performing employees [can be] difficult’ and agencies ‘need the flexibility to expeditiously remove poorly performing employees from these positions without facing extensive delays or litigation,’” the lawsuit states. “Although the order states that removing positions from adverse action protections is ‘necessary,’ it provides no details, data or justification for this change to removal procedures.”

The legislation would prohibit agencies from converting any members of the competitive service into the new Schedule F job classification and block anyone hired directly into a Schedule F position from being converted to the competitive service. It also would reinstate anyone who was fired after their conversion to the new job classification and provide them back pay.

“Congress must stand up to this midnight attack on civil service protections,” Connolly said. “This executive order is based on nothing—no data, no evidence of a problem, and no consultation with stakeholders, including Congress. It is a last ditch attempt by the Trump administration to make it easier to remove federal employees who they deem aren’t ‘loyal enough’ to the president and return us to a patronage politics.”

Last week, the Office of Personnel Management issued guidance suggesting that agencies will have wide latitude in choosing which positions can move into Schedule F. Officials from the agency also briefed congressional staff on the order, but a Democratic Hill staffer said their explanations fell short.

“They said that a significant portfolio would have to be shown related to the three categories related to policy, but when we really started asking questions, it became a lot less clear how they would be using those definitions,” the staffer said. “It’s so squishy and the authority is given to agency heads, and when we were asking about it, OPM would not provide an estimate of how many employees might be included…They wouldn’t even ballpark it.”

During the congressional briefing, OPM confirmed that employees identified for conversion out of the competitive service would have no ability to appeal that decision. The agency had little information about how agencies would set up new administrative appeals processes for employees to bring complaints of prohibited personnel processes.

“So if someone has an adverse personnel action taken against them, the agency has broad discretion to create an administrative process to appeal the workforce action, but there are no guide rails on how robust that process needs to be,” the Hill staffer said. “It could be kabuki theater and kangaroo court all mixed together into a bouquet of ‘not great.'”

The executive order sets a deadline of Jan. 19—one day before the next presidential inauguration—for agencies to submit a preliminary inventory of positions that should be converted to Schedule F. But OPM told congressional staffers that agencies could move faster.

“If an agency does provide a preliminary list early, OPM did say that they would look at it and that would qualify, and then agencies could implement it the next day,” the staffer said. “Then one of the people asked, ‘How can that happen if you haven’t defined what it is yet or outlined any administrative process for appealing any adverse actions?’ All they said was, ‘That’s a good point, we’ll think about that.’”