Trump Spends Most of His Time in the Oval Office Watching TV Instead of Listening to His Advisers, John Bolton Suggests

By taktik(z) GDI
Posted July 6, 2020
In Afghanistan, GDI, Intelligence, Russia
Trump Spends Most of His Time in the Oval Office Watching TV Instead of Listening to His Advisers, John Bolton Suggests2020-07-062020-07-06https://staging.taktikz.com/wp-content/uploads/2015/07/taktikz-Original.jpgtaktik(z) GDIhttps://staging.taktikz.com/wp-content/uploads/2015/07/taktikz-Original.jpg200px200px In an interview on CBS News’ “Face the Nation” on Sunday, the host Margaret Brennan asked Bolton if he believed the president was influenced more by what’s on television or by his advisers.

“I think it’s a combination of television and listening to people outside the government that he trusts, for one reason or another,” Bolton replied.

It has long been reported that the president spends significant amounts of time glued to cable news shows — particularly Fox News — sometimes live-tweeting their segments.

The Fox News hosts Sean Hannity and Tucker Carlson have served as sounding boards and informal advisers to the president. Carlson even accompanied Trump to meet North Korean leader Kim Jong Un in June 2019 while Bolton was sent on a trip to Mongolia.

Since leaving the White House in September, Bolton has become one of the president’s toughest critics. 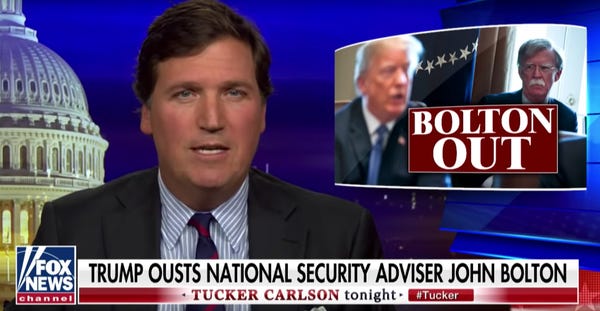 In his memoir, “The Room Where It Happened,” published last month, Bolton makes a series of highly damaging allegations about Trump, including that the president sought China’s help in winning the 2020 presidential election.

The White House had attempted to prevent the memoir’s publication, saying it contained classified information. Trump has also said it contains lies, and he has reacted to Bolton’s claims with a string of denials and insults on social media.

Bolton weighs into the Russian-bounty fiasco

In the Sunday interview, Bolton expressed doubt about the White House’s recent claims that because intelligence indicating that Russia offered to pay Taliban militants to kill US troops in Afghanistan was unverified, the president had not been briefed on it.

The White House issued the denial after reports suggested that the president chose not to take action after learning of the intelligence.

Three separate Taliban sources confirmed to Insider last week that Russia did pay extremists in the group to attack US soldiers in Afghanistan.

Bolton said: “I’ve said in countless other interviews I’m not going to disclose classified information. I’ve got the struggle with the president trying to repress my book on that score already.

“I will say this: All intelligence is distributed along the spectrum of uncertainty. And this intelligence in 2020, by the administration’s own admission, was deemed credible enough to give to our allies.

“So the notion that you only give the really completely, 100% verified intelligence to the president would mean you give him almost nothing. And that’s just not the way the system works.”