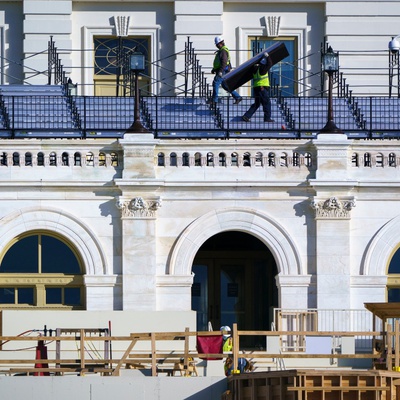 The Presidential Inaugural Committee released more details on Sunday night about the events on January 20. After the swearing-in ceremony, the president-elect, first lady, vice president-elect, and second gentleman will participate in a Pass in Review (a military tradition that symbolizes a peaceful transfer of power); President-elect Biden will receive a presidential escort (composed of members of the military) from 15th Street to the White House; and, due to the pandemic, there will be a virtual parade that “will celebrate America’s heroes, highlight Americans from all walks of life in different states and regions, and reflect on the diversity, heritage, and resilience of the country as we begin a new American era.” Here are some of the other recent headlines you might have missed.

The Trump administration published the Plum Book late last month. It outlines 9,000 positions across government, such as Senate-confirmed, Schedule C and Senior Executive Service jobs, and is an important resource for transition teams and job seekers.

With a little over two weeks until the Inauguration, President Trump sent 30 nominations to the Senate on Sunday, which included Chad Wolf to be Homeland Secretary Department secretary. He is currently holding the position in an acting position and both the Government Accountability Office and a federal judge determined his appointment was unlawful.

The Trump administration is considering putting a temporary freeze on some foreign aid during its last few weeks in office, The Washington Post reported on December 31. “The move to freeze the money was conveyed in a notice [last] week from the White House Office of Management and Budget to U.S. government officials who work on foreign aid programs,” said the report. “OMB officials told the agencies that the White House was working on a package of spending freezes…U.S. foreign aid officials had been expecting some sort of effort by the White House to freeze their funding, ever since Trump blasted the bipartisan coronavirus stimulus and spending bill passed by Congress last week.”

All 10 living former Defense secretaries wrote in The Washington Post on Sunday that the presidential election is over and stressed the importance of transitions. “They often occur at times of international uncertainty about U.S. national security policy and posture,” they wrote. “They can be a moment when the nation is vulnerable to actions by adversaries seeking to take advantage of the situation…acting Defense Secretary Christopher C. Miller and his subordinates—political appointees, officers and civil servants—are each bound by oath, law and precedent to facilitate the entry into office of the incoming administration, and to do so wholeheartedly. They must also refrain from any political actions that undermine the results of the election or hinder the success of the new team.” This comes as Republicans in the House and Senate are preparing to object to Congress’ certification of Biden as the winner on Wednesday.

After Biden blasted OMB and the Defense Department last week for not being helpful with the transition, both agencies released statements contesting his claims. “Since ascertainment, OMB has provided significant briefing materials on its operations and has provided factual information about ongoing programs to the [Biden transition team] upon request,” OMB Director Russ Vought wrote on December 31. “What we have not done and will not do is use current OMB staff to write the [transition teams’] legislative policy proposals to dismantle this administration’s work.”

This came after OMB posted a memo to its website on Christmas Eve saying it “is stripping a good governance provision from the budgeting process that requires agencies to set goals and meet them in order to get funding,” right before Biden takes over, The Hill reported.

Biden will issue a memo on January 20 to halt or delay last minute or “midnight” regulations from the Trump administration that have not taken effect yet. “This freeze will apply not only to regulations, but also guidance documents—documents that can have enormous consequences on the lives of the American people,” Jen Psaki, a senior adviser to President-elect Biden’s transition, said during a briefing last Wednesday. She specifically called out an upcoming rule from the Labor Department “that would make it easier for companies to call their workers independent contractors to avoid minimum wage and overtime protections.” Biden will also revoke “harmful Trump executive orders,” Psaki said.

The transition team beat its goal of naming 100 members of the incoming White House staff by the end of 2020. “Sixty-one percent are women, 54% are people of color, [Asian American and Pacific Islander] appointees represent more than twice their share of the national population, LGBTQ+ appointees account for 11% of all White House staff, almost 20% of appointees are first-generation Americans [and] almost 40% of White House senior staff have children at home,” said a press release.

Thousands of National Guard members are coming to Washington, D.C., to support the inauguration, which is the typical protocol, Military Times reported on Saturday. “Restrictions under COVID-19 may mean that Biden’s Jan. 20 inauguration is a smaller-scale event,” said the report. “But the D.C. National Guard, which is responsible for identifying requirements and requesting support from other states, is planning for all contingencies…Guard members will assist D.C. Park Police and other law enforcement with crowd management, traffic control, emergency response services and communication support.”

On Monday, Jeff Neal, former chief human capital officer for the Homeland Security Department, outlined on his blog ChiefHRO, which covers federal human resources, what it means to take the oath of office. “One purpose of the Oath of Office is to remind federal workers that they do not swear allegiance to a supervisor, an agency, a political appointee, or even to the president,” he wrote. “The oath is to support and defend the U.S. Constitution and faithfully execute your duties. The intent is to protect the public from a government that might fall victim to political whims and to provide a North Star–the Constitution–as a source of direction.”

Today’s GovExec Daily podcast episode looks at federal employees’ whistleblower rights and the importance of them during the transition.

Help us understand the situation better. Are you a federal employee, contractor or military member with information, concerns, etc. about how your agency is handling the transition? Email us at newstips@govexec.com.