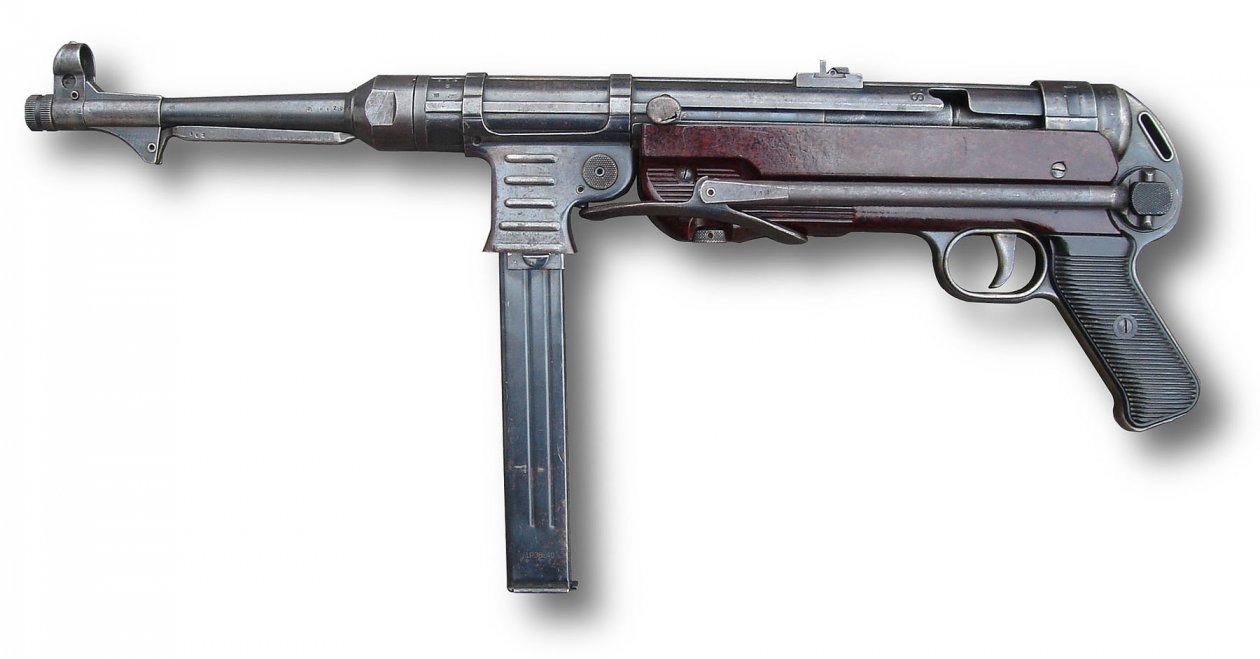 World War II saw the devel­op­ment of some fine — and arguably not so fine — small arms. In the cat­e­go­ry of the sub­ma­chine gun, the United States mil­i­tary had its Thompson, the Germans had the MP40, the Soviets had the PPSh-41 and the British had the Sten Gun.

While the StenGun arguably comes in at the bottom of most lists, the Soviet’s PPSh-41 is often regard­ed as one of the very best sub­ma­chine guns field­ed during the war. The blow­back weapon was reli­able, rugged and had a blis­ter­ing­ly fast rate of fire in exces­sive of one thou­sand rounds per minute. It was not uncom­mon for German sol­diers to use a cap­tured one in favor of their own issued weapons.

However, the suc­cess of the PPSh-41 can be traced back to the Red Army’s strug­gle in the 1939 – 40 “Winter War” with Finland. The Soviets under Joseph Stalin expect­ed a quick vic­to­ry — likely one that would mirror Germany’s swift defeat of Poland in the early autumn of that year. However, the Finns proved tena­cious and while they lacked the tanks or air­craft that the Red Army could throw at them, they had the Suomi KP/-31.

Officially known as the Suomi-konepis­tooli for “Finland-sub­ma­chine gun” or lit­er­al­ly “Finland Machine-pistol” it entered ser­vice in 1931 and it has been described as one of the most suc­cess­ful sub­ma­chine guns of World War II.

Its design dated back to 1922, and it was based on a pro­to­type known only as “M‑22,” which evolved into the KP/-26. That weapon was cham­bered for the 7.63 mil­lime­ter Mauser round and sport­ed a curved mag­a­zine. The devel­op­ment of the weapon is unique in that in the 1920s and 1930s Finland was slowly build­ing a domes­tic arms indus­try. The nation was newly inde­pen­dent from Russia when a coali­tion of farm­ers, middle-class and upper-class social strata known as the White Guards defeat­ed the Finnish Reds, which were made up of indus­tri­al and agrar­i­an work­ers in a brief, but albeit bloody, civil war.

With the rise of the Soviet Union, Finland’s gov­ern­ment knew war would come sooner or later and sought to devel­op weapons to address such a threat. While the KP/-26 was a good first attempt, Finland had become a “can-do nation” that knew it could do better. The design­ers returned to the draw­ing board.

It sport­ed a typ­i­cal rifle-style wooden stock body that held the receiv­er and the other inter­nal work­ing com­po­nents. Unlike the KP-26, the KP/-31 was cham­bered for the common 9×19 mil­lime­ter Parabellum car­tridge.

It was not a refined weapon by any means. It was heavy at just over ten pounds, and it fea­tured a simple straight blow­back oper­a­tion. More impor­tant­ly, it was rugged, con­tin­ued to oper­ate in the worst winter con­di­tions and thanks to its simple firing mech­a­nism and weight made it easier to con­trol and more accu­rate than the Soviet Union’s later PPSh-41.

While it could be used with twenty‑, thirty-six‑, forty- and even fifty-round detach­able box mag­a­zines, the weapon was large­ly employed with a drum mag­a­zine that held sev­en­ty-one-rounds. That latter option gave the Finnish sol­diers an advan­tage when facing waves of Red Army sol­diers as the Finns could “spray and pray” at the attack­ers with­out the need to reload as often. As noted it was accu­rate and deadly at close ranges.

Also unique about the KP/-31is that it was a sub­ma­chine that fea­tured a replace­able barrel — and that fea­ture proved cru­cial in the close fight­ing in the frigid tem­per­a­tures during the Winter War. Whereas other weapons might over­heat from extend­ed fire, Finnish sol­diers could swap out the barrel and keep blast­ing away! No other sub­ma­chines of the era allowed for such quick chang­ing of the barrel.

The KP/-31 proved ideal for the con­di­tions of the Winter War and was used through­out the Continuation War (1941 – 44), while it was then used against the Germans in the brief Lapland War at the end of the larger World War II.

To help address the high pro­duc­tion cost, Finland had export­ed the weapon and it was used by both Bolivia and Paraguay during the Chaco War, while both sides also used the KP/-31 in the Spanish Civil War. During World War II, when Finland joined Nazi Germany to fight the Soviets in the Continuation War, Finland sup­plied some three thou­sand to its Axis part­ner, and many of those were used by the Waffen-SS and other vol­un­teers from Norway.  In addi­tion to being a reli­able weapon in the cold winter con­di­tions, the sub­ma­chine proved it was just as reli­able in the dry and hot con­di­tions of the Middle East as it was used in the 1948 Arab-Israeli War.

However, its last­ing legacy may have been in how the design and use of the drum mag­a­zine may have allowed the Soviet’s Red Army to refine its PPD sub­ma­chine and create the improved PPSh-41.

– This Story First Appeared in The National Interest --