The US Air Force Has Updated and Broadened Its Dress Code to Allow Turbans, Beards, and Hijabs 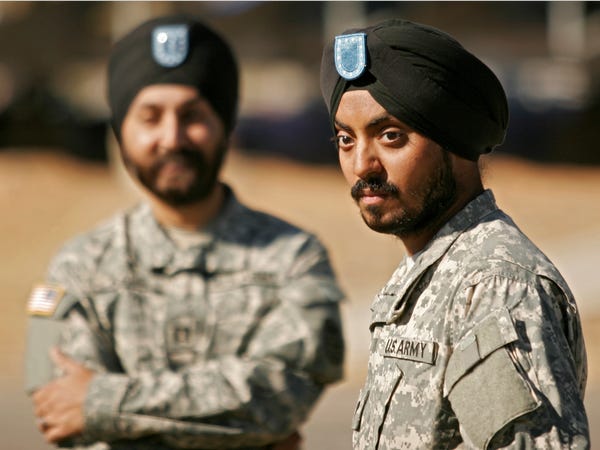 The US Air Force has clar­i­fied a groom­ing and uni­form process that allows reli­gious exemp­tions for tur­bans, hijabs, and neatly trimmed beards, accord­ing to the new guide­lines.

Sikh and Muslim airmen were pre­vi­ous­ly allowed to make a request for reli­gious accom­mo­da­tions, but the exemp­tion to uni­form and groom­ing guide­lines was grant­ed on a case-by-case basis and could take a while to be approved.

The new guide­lines, approved on Feb. 7, require that accom­mo­da­tion be made within 30 days in the US.

“Today, the Sikh Coalition com­mends the United States Air Force’s recent move to clar­i­fy the uni­form and groom­ing accom­mo­da­tion process for reli­gious­ly obser­vant minori­ties, includ­ing Sikh Americans, who wish to serve,” the coali­tion, an advo­ca­cy and civil rights orga­ni­za­tion, wrote in a state­ment. “Moreover, we are also proud to announce that our client, Airman 1st Class (A1C) Gurchetan Singh, is the first Sikh American to secure a reli­gious accom­mo­da­tion to serve in the Air National Guard.”

A hand­ful of Sikhs and Muslims have pre­vi­ous­ly received accom­mo­da­tions to serve in the Air Force.

Singh, orig­i­nal­ly from India, received his accom­mo­da­tion in September, accord­ing to the coali­tion. He became an American cit­i­zen in 2013 and was inspired to serve in the mil­i­tary.

He had a con­ver­sa­tion with an Air National Guard recruiter while study­ing at the University of Washington and later con­tact­ed the Sikh Coalition for assis­tance in January 2019. The group sub­mit­ted an accom­mo­da­tion request in April 2019.

“The Sikh Coalition has helped me real­ize my career dream while ensur­ing that I stay true to myself and my faith,” Singh said in a writ­ten state­ment. “Their legal assis­tance means that I won’t face dis­crim­i­na­tion as I step up to serve, and I’m proud to help clear the way for other Sikhs who may want to join the US Air Force by demon­strat­ing that we can serve hon­or­ably while main­tain­ing our arti­cles of faith.”

“We sup­port these new guide­lines as a step toward reli­gious accom­mo­da­tion and inclu­sion for mil­i­tary per­son­nel of all faiths,” Communications Director Ibrahim Hooper said in a writ­ten state­ment. “Thousands of American Muslims and mem­bers of other minor­i­ty faiths serve in our nation’s mil­i­tary and should be able to prac­tice their faith while serv­ing.”

The US mil­i­tary has not always been a wel­com­ing place for Muslim and  Sikh people.

Army Spc. Cecilia Valdovinos, for exam­ple, was grant­ed per­mis­sion to wear her hijab while in uni­form in June 2018, but was quick­ly met with “ 'extremely hateful' behavior."

She filed a com­plaint with the mil­i­tary’s Equal Opportunity Office early last year after she said she was forced to remove her hijab in front of the other sol­diers.

The Army, in 2017, became the first service branch to allow Muslim and Sikh soldiers to wear head coverings and beards.