The Lost Guns of Nazi Germany — Machine Guns and More 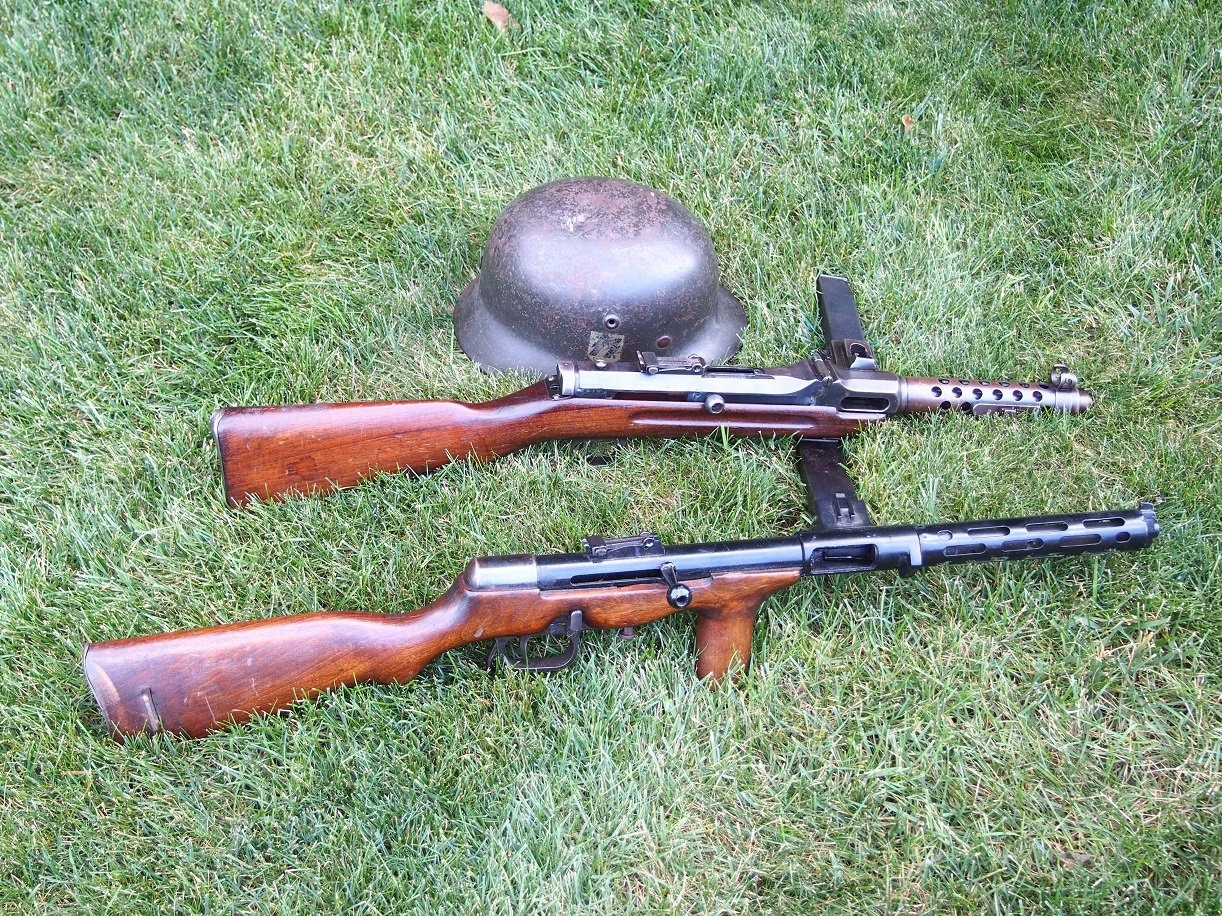 During the Second World War, the Third Reich field­ed what have been called some of the finest firearms ever pro­duced – includ­ing the StG44, the world’s first assault rifle. While it arrived too late to make a sig­nif­i­cant dif­fer­ence in the out­come of the war, it influ­enced post-war weapon design. In addi­tion, the Germans pro­duced such iconic weapons as the MP-40, FG42 and MG42, all of which were quite fine firearms that also influ­enced sub­se­quent small arms in the post-war years.

During the Second World War, the Third Reich field­ed what have been called some of the finest firearms ever pro­duced – includ­ing the StG44, the world’s first assault rifle. While it arrived too late to make a sig­nif­i­cant dif­fer­ence in the out­come of the war, it influ­enced post-war weapon design.

In addi­tion, the Germans pro­duced such iconic weapons as the MP-40, FG42 and MG42, all of which were quite fine firearms that also influ­enced sub­se­quent small arms in the post-war years.

While The National Interest previously reported that the efforts to create such fine weapons actu­al­ly proved prob­lem­at­ic for Germany. The weapons were too over­pro­duced and over engi­neered, and were based around unnec­es­sar­i­ly com­pli­cat­ed sys­tems during wartime. Having the best machine gun such as the MG42 – a debat­able point anyway – does­n’t mean much if you can’t pro­duce enough of them, or if the weapons are com­plex to prop­er­ly main­tain.

However, all of the above exam­ples were the result of the inter­war evo­lu­tion of German small arm’s design, much of which was con­duct­ed in secret or in ways to skirt the Treaty of Versailles. The treaty lim­it­ed the size of the Reichswehr (German Army) to just 100,000 men, with an addi­tion­al 15,000 sailors for the navy. The treaty also banned heavy weapons, armored vehi­cles and any air­craft as well as new machine guns. Despite the ban, the Germans began to devel­op a new gen­er­a­tion of small arms – and that includ­ed more advanced machine guns and sub­ma­chine guns.

It is cru­cial to note that this began even before the Nazis came to power. These efforts were first launched under the “Black Reichswehr,” the cadre of mil­i­tary and former mil­i­tary offi­cers who strug­gled to accept the defeat in the Great War (World War I).

Despite not being allowed by treaty to devel­op new machine guns, the Reichswehr forged ahead anyway in the late 1920s, and pro­duced the exper­i­men­tal Maschinengewehr 30 (MG30). Development of this light machine gun took place under the direc­tion of Louis Stange at Rheinmetall’s Sömmerda office – and to skirt the treaty’s pro­hi­bi­tions, Rheinmetall acquired a major­i­ty share­hold­ing of the Swiss man­u­fac­tur­er Waffenfabrik Solothurn AG so work could begin in earnest across the border.

The result­ing MG30 was a simple design that offered both fully auto­mat­ic and semi-auto­mat­ic fire. Unlike the wartime MG08, which was based on the Maxim design, this new machine gun was air-cooled and required a team of just two to oper­ate. However, the German Reichswehr actu­al­ly reject­ed the design and only about 3,000 of these weapons ended up being pro­duced. Most of those were used by Germany’s Axis ally Hungary during the Second World War.

While the German mil­i­tary of the early 1930s wasn’t impressed with what the MG-30 had to offer, it opted instead for anoth­er light machine gun, the Maschinengewehr 13 (MG13). It was actu­al­ly a com­plete con­ver­sion and redesign of the Dreyse water-cooled heavy machine gun, but as an air-cooled ver­sion. The weapon was a short-recoil oper­at­ed, mag­a­zine fed, air-cooled light machine gun fired from a closed bolt, while the barrel could be with­drawn and replaced – albeit it did require a par­tial dis­as­sem­bly of the weapon, which was not exact­ly ideal in combat sit­u­a­tions.

The weapon was tested by the Reichswehr and adopt­ed as the MG13 – the model des­ig­na­tion was a very crude attempt to rep­re­sent what was really a newly devel­oped weapon as a mod­i­fi­ca­tion of the older design. It was briefly the core German infantry squad sup­port weapon, and was orig­i­nal­ly issued with a 25-round curved box mag­a­zine, but later was mod­i­fied to be used with a 75-round twin drum (Doppeltrommel 13) mag­a­zine.

The Rheinmetal Company then revis­it­ed the MG30 and devel­oped the Maschinengewehr 15 (MG15), which was devel­oped specif­i­cal­ly for use in German air­craft. The gun used a rotat­ing bolt/lockring system to pro­duce a firing rate of 1,000 rounds per minute, which was ideal for defend­ing the new fleet of bombers that the German Luftwaffe also began to devel­op in secret.

Despite the promise, the weapon’s short­com­ings became appar­ent – it was hard to reload, espe­cial­ly in flight – so the weapon was taken out of ser­vice on the air­craft and mod­i­fied for use as an infantry sup­port weapon. As its air-cooled bar­rels could be easily swapped out, its high rate of fire was a seri­ous prob­lem on the ground. As a result the MG15 was mod­i­fied to become a water-cooled light machine gun. Even in that capac­i­ty, it was large­ly used by rear guard troops, but Germany also sup­plied the weapon to its Romanian allies, where it saw use in the inva­sion of the Soviet Union and the later fight­ing against Hungary at the end of World War II.

Among the first weapons designed in semi-secret was an updat­ed ver­sion of the Maschinenpistole 18/I, more com­mon­ly known as the MP18. The new MP28 – offi­cial­ly the Maschinenpistole 28/II – was an improve­ment over the World War I era sub­ma­chine gun, replac­ing the com­plex Luger pistol snail mag­a­zine for a simple stick mag­a­zine. This helped better bal­ance the sub­ma­chine gun, and eased the reload­ing process.

The MP28/II was con­sid­ered a fine weapon, but it was gen­er­al­ly con­sid­ered too heavy for front line use, yet it remained in use with German police and SS units during the Second World War. While the MP28 was a solid weapon, once the Nazis came to power an attempt was made to create some­thing better – it took sev­er­al tries to get it right.

The first was the Maschinenpistole 34 (MP34), a large­ly for­got­ten weapon – but one of the rea­sons was that it was a Nazi-designed sub­ma­chine gun that was actu­al­ly devel­oped in Austria. It was based on the MP18, and devel­oped in secret via the Swiss man­u­fac­tur­er Waffenfabrik Solothurn AG. However, Solothurn was unable to handle the pro­duc­tion and this fell to the Austrian firm Waffenfabrik Steyr.

This weapon, with its highly craft­ed machine parts and fin­ished to the high­est pos­si­ble stan­dard, has led to it being described as the “Rolls Royce of sub­ma­chine guns.” It was also first adopt­ed by the Austrian Army as the Steyr-Solothurn S1-100 – but fol­low­ing the 1938 Anschluss, which uni­fied Austria with Germany, it was re-des­ig­nat­ed as the MP34. Production ceased in mid-1940 due to the high pro­duc­tion costs, but the MP34 was so well built that it was favored by the Waffen SS forces in the early stages of World War II and it was later used by the German reserve units as well as police forces through­out the rest of the war.

The next attempt went in a com­plete­ly dif­fer­ent direc­tion and is the rare exam­ple of a less-refined German small arm of the early Nazi era. It was the Erma Maschinenpistole (EMP), which was also devel­oped in secret by German arms-design­er Heinrich Vollmer, orig­i­nal­ly as the VMP1935. It was based on the MP18/28, and fea­tured a 32-round box mag­a­zine.

Perhaps because the EMP was cruder in design, it was mar­ket­ed for export and in the late 1930s sold to var­i­ous “friend­ly” nations that includ­ed Bulgaria, Spain and Yugoslavia. Ironically many of those sold to Yugoslavia were used against German sol­diers during the Nazi inva­sion in 1941! And in the case of those sold to Spain, the EMP was used by Nationalist and Republican forces alike. After the Nationalist vic­to­ry, the weapon was pro­duced by Fascist Spain under license at the arse­nal of A Coruña under the des­ig­na­tion M41/44.

During World War II, the EMP was widely issued to SS units, and some were report­ed­ly still in use by the SS Charlemagne Division, which was made up of French vol­un­teers and was among the final SS units to sur­ren­der at the end of the war.

The final and large­ly for­got­ten German weapon is also one of the most dis­tinc­tive – the Maschinenpistole 35 (MP35), simply because it is the only sub­ma­chine gun of the era that fea­tured a mag­a­zine that insert­ed from the right-hand side of the weapon. Why its design­er Emil Bergmann opted for this posi­tion­ing remains unknown as he left no record for making this choice. However, it has been sug­gest­ed that this con­fig­u­ra­tion was chosen to stan­dard­ize the manual of arms with the K98k style bolt handle. As a result, it has been favored by left handed shoot­ers.

The MP35 was devel­oped with pro­pri­etary mag­a­zines, but when pro­duc­tion was ramped up it was mod­i­fied to uti­lize MP28-com­pat­i­ble mag­a­zines. It had a 540 rpm rate of fire. While never adopt­ed by the Germany Army it was used by the SS and German police units, and export­ed to numer­ous coun­tries.

– This Story First Appeared in The National Interest –