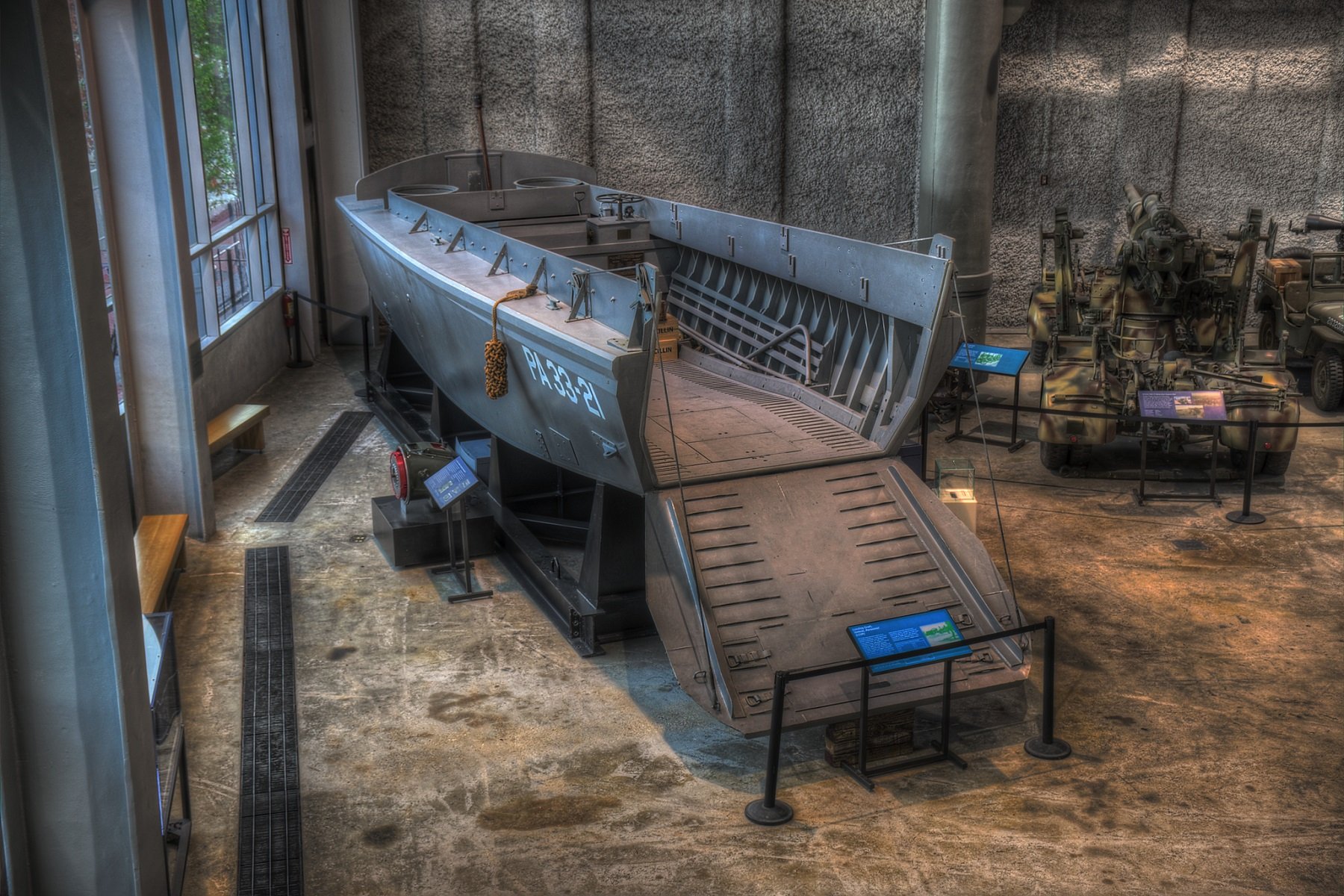 Here’s What You Need To Remember: The boat’s crucial innovation was the ramp. With previous boats, men had to jump over the sides, exposing them to enemy fire. The ramp allowed for a more orderly landing – although it was certainly still risky. (A faithful replica of a Higgins Boat is used in the landing scene in Saving Private Ryan.)

It just might be the most recognized boat of the Second World War. The Landing Craft, Vehicle, Personnel, called the LCVP, or the Higgins Boat as it is more commonly known, is familiar from photographs and film shot during the war, particularly the Normandy Beach landings.

Most famously, a brave Coast Guard photographer took the iconic photograph Into the Jaws of Death from the back of a Higgins Boat. The haunting image depicts U.S. Army soldiers jumping off the boat into the water and towards the Omaha Beach. The story of the Higgins boat begins earlier though, before the war.

Rumor has it that the early Higgins boat was designed for bootleggers and smugglers who small sturdy boats capable of beaching quickly from shallow water. With the end of Prohibition in the early 1930s, the boat’s designer and namesake Andrew Higgins needed a new market for his nimble boat.

Dissatisfied with the landing boats designed by the Navy, The United States Marine Corps tested several commercial designs in the late 1930s, eventually settling on the former bootlegger boat designed by the Higgins boatbuilding company.

Although the design was indeed capable of beach landings, offloading men and supplies was rather slow as the design lacked a ramp. To disembark, Sailors and Marines had to jump off the sides or bow, badly exposed to fire from the shore. Still, the boat could perform better than other landing boats the Navy designed and it was rushed into service as a stop-gap measure.

Though Higgins’ early design was accepted, he was tasked with building a better landing craft, specifically a boat that would allow troops to more quickly disembark—via a bow mounted ramp.

The Higgins boat itself was rather small and simple. Its cargo space, located at the forward three quarters of the boat, could carry 8,000 pounds, or a little over 3,600 kilograms. This translated to thirty-six fully-armed soldiers, or an Army Jeep and a smaller, twelve-man squad.

Although the front ramp was made of steel, the Higgins’ sides were made of laminated plywood to save that precious wartime commodity. A mostly-wood construction also lowered the boat’s weight and allowed it to have a relatively shallow draft, the distance from the bottom of the hull to the waterline. A low draft allowed the boat to unload men and supplies quite close to the shoreline—of crucial importance for ship-to-shore operations.

Two gunners fired .30 caliber Browning machine guns over the heads of the troops onboard from firing cockpits in the rear. The driver sat on the port side next to the engine in the boat’s center. An extremely accurate recreation of what riding to shore in a Higgins was like can be seen in the opening sequence of the 1998 hit Saving Private Ryan.

During the war, the Higgins boat ferried troops onto the beaches of North Africa, in France for the Normandy landings, and throughout the Pacific. Without Higgins, the Marine Corps’ island hopping campaign would not have been possible.

The boat’s usefulness could not be overstated. Dwight D. Eisenhower, the Supreme Allied Commander sang Higgins’ praises, stating that “Andrew Higgins is the man who won the war for us.” He went on to explain, “If Higgins had not designed and built those LCVPs, we never could have landed over an open beach. The whole strategy of the war would have been different.” A resounding endorsement from the one of the greatest generals of one of the greatest wars.

Caleb Larson holds a Master of Public Policy degree from the Willy Brandt School of Public Policy. He lives in Berlin and writes on U.S. and Russian foreign and defense policy, German politics, and culture. This article first appeared earlier this year.