The EU Must Fight the Collapse of Biodiversity 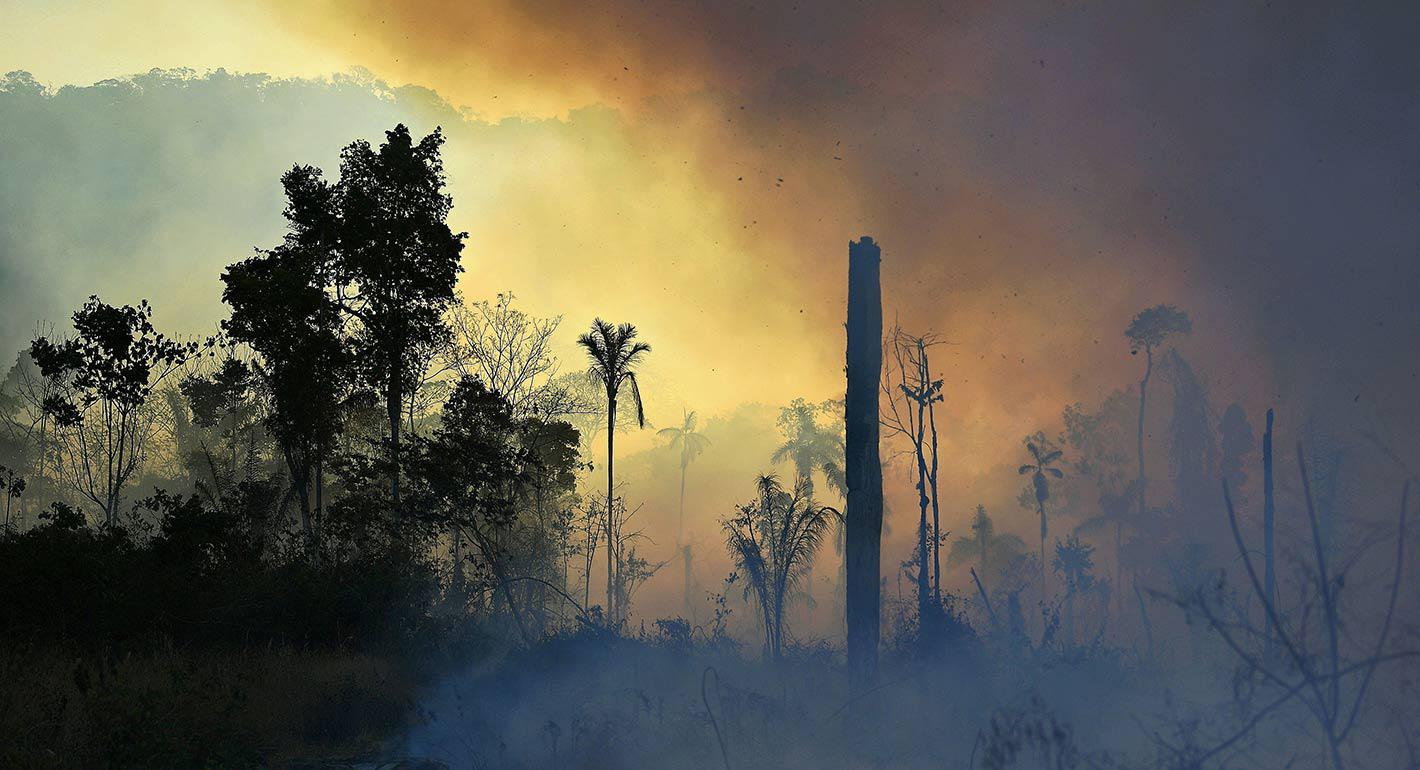 From all of Charles Darwin’s works on evolutionary biology, history remembers the concept of “survival of the fittest”—the natural world as a cruel environment in which competition is the rule and where survival is only ensured by predatory behavior. His ideas inspired a range of human ideologies and activities—from the fascist fascination with eugenics and purity of race to the development of genetically modified organisms in agriculture to laissez-faire economics.

This survival-of-the-fittest mentality is alive and well in today’s geopolitics. Power accumulation has been rationalized as a natural means to security, which in turn calls for competition over resources and rival ideologies.

Today, the Galápagos Islands, a highly biodiverse ecosystem where Darwin once based his research, suffers as a Chinese fishing fleet plunders the surrounding protected marine areas in a flagrant demonstration of power. With this fleet, China contributes to the pillaging of the marine world, which houses critically important species such as hammerhead sharks—predators that protect and regulate an entire marine food chain that humans, along with other species, rely upon for sustenance and survival.

Olivia Lazard is a visiting scholar at Carnegie Europe. Her research focuses on the geopolitics of climate, the transition ushered by climate change, and the risks of conflict and fragility associated to climate change and environmental collapse.

This is not an isolated event. In fact, biodiversity plundering is the norm. Humans have caused the disappearance of 83 percent of wild mammals and 50 percent of plants over the last four decades. Even more striking, the latest IPBES report announced that we had started the planet’s sixth mass extinction. As the Dasgupta review shows, this extinction is directly correlated to the acceleration of modern economic globalization.

It is critical to underscore that a mass extinction would not be limited to the plant and animal kingdoms. As humans, we must understand our fundamental belonging to, and interdependencies with nature, if we are to save ourselves from self-inflicted famine, civilizational collapse, and extinction.

Why Does Biodiversity Matter?

Most people know a little about biodiversity: that a complex linkage of plants and insects leads to pollination, which itself leads to food production. Keystone species—animals that have a central role in their natural environment, such as beavers—design landscapes, regulate water flows, and help with water filtering. Phytoplankton and terrestrial vegetation use carbon dioxide as fuel and produce oxygen. Certain plant and animal species depollute soils, while others decompact them, enabling life to take hold. Mangroves protect coastlines against devastating floods and storms, while nursing shallow marine life.

Taken individually, species have crucial functions to perform underground, in the oceanic depths, and in diverse terrestrial landscapes. Taken together, every single species complements the others, working interdependently for the benefit of all within ecosystems and among them. In sum, biodiversity is the bedrock of ecosystemic resilience, which is essential to combat climate change.

Biodiversity is essentially nature’s art and its science. It is information on the move and intelligence of forms, colors, shapes, textures, smells, and learning. It is evolution itself, and we are a part of it. Human cultures used to emanate from bioregions, resulting in differences in food habits, architectures, and economic trades. The French term “terroir” encapsulates this perfectly: culture draws its strength for the ecosystems that midwife it, making for a resilient economy and people.

The Global Take on Biodiversity

Yet, two intertwined phenomena are weakening human cultures and natural biodiversity. First, economic globalization has favored economies of scale over traditional production. There are strong macroeconomic benefits for this but with two side effects: standardization, as humans need more and more land to grow monocultural crops, and urbanization, as economies develop their industrial and service-based sectors. Both result in gradual, yet exponential, human encroachment on natural habitats.

The second phenomenon is uniformization of agricultural techniques and cropping. These increased substantially following the Second World War and with the Green Revolution (in which developing countries started using pesticides and high-yield crops), as did the use of pollutants and fossil fuels. These led to an assault on the land and water that biodiversity feeds upon. Over time, this has weakened the health of ecosystems worldwide, degrading their ability to store carbon, water, and life. For humans, this means that water is more polluted and that food chains are contaminated. As a result, food is less nutritious over time, because soils lose the nutrients that biodiversity produces.

In addition to these phenomena borne out of economic growth and development strategies, biodiversity has become a direct object of consumption. Because keystone species such as tigers, lions, and elephants are becoming rarer, they are also becoming more lucrative to hunt. In 2014, Interpol warned that wildlife trafficking had become the fourth most profitable illegal activity worldwide—accounting for almost 15 billion euros (over $17 billion) a year in revenues. This illegal sector combines high levels of violence with corruption, resulting in systemic human rights abuses of environmental defenders and indigenous communities. In 2017, about four environmental defenders were killed per week. With them, precious knowledge to sustainably redesign human habitats is being lost.

All of these issues are inherently intertwined with rising levels of economic inequality. In fact, inequality actually predicts biodiversity loss. This is a stark warning: economic standardization has not only stripped ecosystems of their vitality, it has also stripped human communities of their ability to steward nature and contribute to its complexity. To illustrate, free trade agreements between Europe and Latin American countries actually promote large-scale productions encroaching on local ecosystems and traditional livelihoods. These drive down prices for staple crops, and push farmers into poverty, while encouraging economic dependency upon agro-chemical inputs. There is nothing free, nor freeing about this.

The result? Social and ecological disintegration. The more politics fails to acknowledge the shifting grounds upon which it stands, the faster it will generate conflict at various scales.

What It Means for the European Union

If the EU is to succeed in the combined fight against climate change and the collapse of biodiversity, it must address the fundamental drivers of ecological disintegration. The EU’s Green Deal is a significant step in the right direction. It is still in strategic design phases, which the foreign policy sector must contribute to proactively and constructively. A few areas already need more attention and higher prioritization.

The biodiversity, the circular economy, and the farm-to-fork strategies must be backed by the reform of old mechanisms such as the Common Agricultural Policy (CAP), which in its current state undermines the credibility of the Green Deal as a coherent European signature at home and abroad. The CAP in Europe is the main driver of biodiversity loss and a major contributor to carbon dioxide emissions. The next multiannual financial framework must provide robust incentives for systemic shifts toward agro-ecological approaches and ecosystems restoration.

In addition, the CAP encourages unfair competition with partners across the world, including countries in West Africa. In Burkina Faso, the CAP can dampen the contribution of traditional livelihoods to the national economy and create unnecessary poverty as subsidized European goods flood markets and automatically lock dairy producers out. At its best, the EU is a celebration of diversity in all its forms. So it should also celebrate biodiverse productive landscapes as a political landmark in its internal and foreign policy investments.

In a world where geopolitical competition leads countries and people to plunder nature, it is essential that the EU build its reputation as a foreign policy partner that supports new socioecological contracts worldwide. We must map and acknowledge the ecological interdependencies that regulate our planet, then govern in accordance with them. We must align policies, investments, and projects with social and economic stewardship of nature. The EU must investigate how to design its foreign policy in a way that preserves, regenerates, and institutionalizes the health of local ecosystems throughout its diplomatic engagements. Doing this also entails enabling or incentivizing social and political systems to take a stewardship role over their natural environment, for example by strengthening human and environmental rights together.

The EU must also urgently contribute to making the UN’s Sustainable Development Goals (SDG) more robust on environmental issues. A recent study demonstrates that SDG environmental targets fail to preserve biodiversity. Instead, they skew data toward socioeconomic indicators that promote progress at the expense of nature. Development funding from Europe must address this bias.

Finally, within the Green Deal, the EU must be extremely careful not to pit climate against environmental goals. It is becoming increasingly clear that the European digitalization and green ambitions rely on mining activities that will have negative effects on key ecosystems regulating the climate. Unless the EU invests in greater research and development on battery development, industrial and popular demand for mineral extraction will quickly bring the EU to overshoot planetary boundaries—key natural limits whose overreach would lead to dramatic and irremediable damage on a global scale.

This means, to start with, that we must expand our indicators to be multidimensional. Carbon dioxide emission reduction is not enough of a measure for a transition that should aim to be systemic and ecological. Neither is GDP an accurate measure of economic performance when it fails to integrate the consumption of nature and rising inequalities across the world—both of which undermine the rule of law.

These priority areas are far from being an exhaustive list, and yet, the work they already require is vast. The challenges we face are complex, and there is little room for error. The EU must actively connect the dots between its ambitions and natural realities to safeguard a viable future at home and abroad. If the EU is to meet the challenge, it needs to embrace this complexity and write the planet’s interdependencies into its policy frameworks. The risks of failing to do so will be far greater than not.