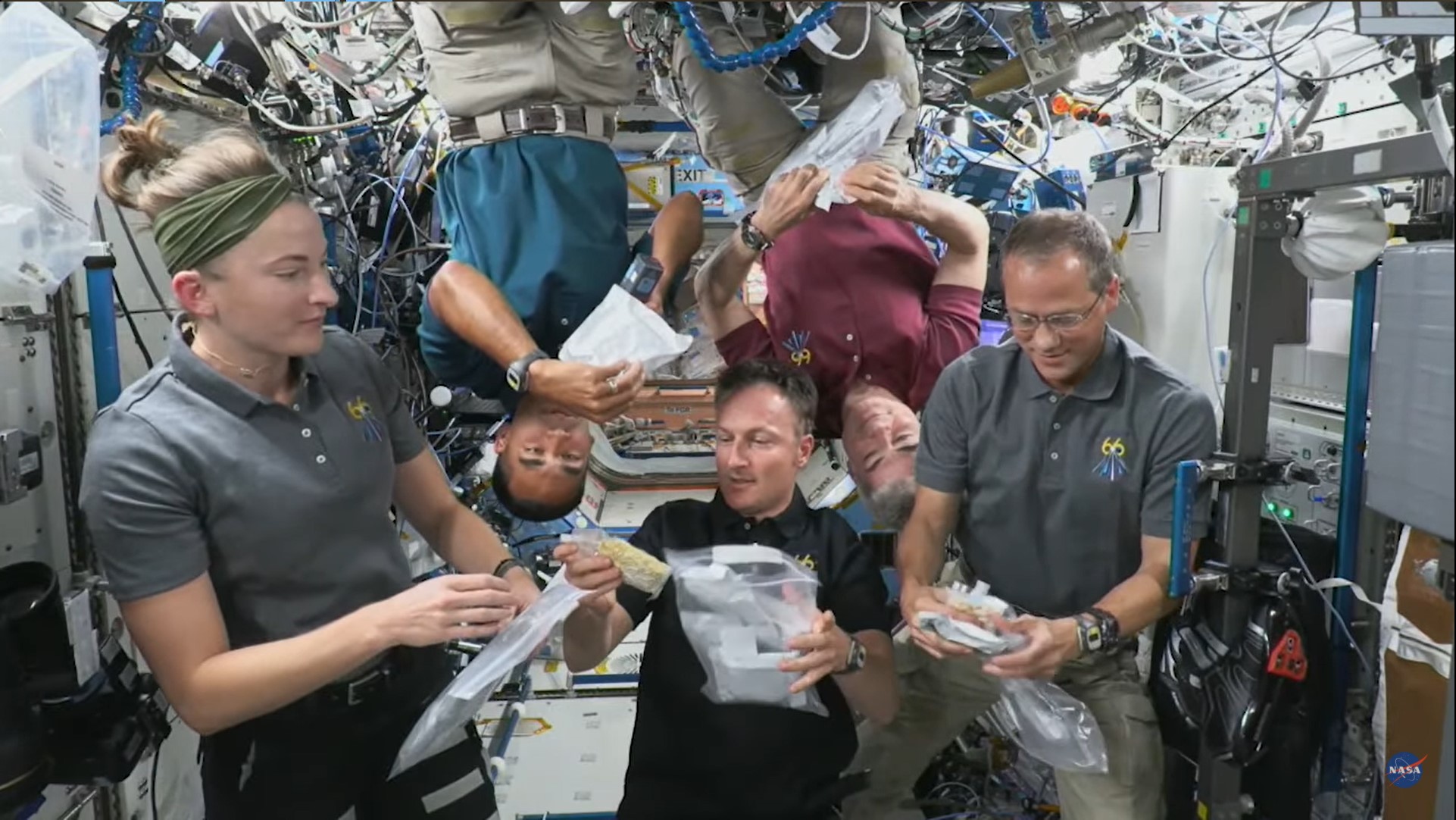 Expedition 66 spacefliers on the International Space Station plan a “turkey trot” and some special food in honor of U.S. Thanksgiving on Thursday (Nov. 25).

Five astronauts of the seven-person crew gathered to film a YouTube video released Monday (Nov. 22) by NASA’s Johnson Space Center about how they will celebrate the holiday while in orbit.

NASA astronaut Raja Chari acknowledged the astronauts will still need to put in their required 90 minutes to two hours of exercise to stay healthy during their months of time in microgravity. But to make things fun, traditionally International Space Station (ISS) crews call their Thanksgiving treadmill time a “turkey trot.”

Related: How NASA tech helped make your Thanksgiving food safe (and your family Zoom sessions, too)

“I’ve got some special surprise colored headbands for the crew to wear,” he said, joking that the exercise would allow them to run off the calories of a Thanksgiving meal, which will include delicacies such as crab bisque, candied yams and cherry blueberry cobbler, along with the requisite turkey.

The crew acknowledged it is tough to spend time away from their family and friends on Earth during the holiday season. That said, the astronauts also noted that the training ahead of a space station expedition can last up to two years and fosters close collegiality.

“For me, Thanksgiving has always been about spending time with people I love the most,” said NASA astronaut Kayla Barron. The crew, she added, will “invite our cosmonaut colleagues to join us,” from the Russian side of the space station. As a bonus, she noted, meal prep won’t take as long as it does on Earth, as most of what the astronauts eat just needs to be reheated or briefly assembled.

Expedition 66 commander and NASA astronaut Mark Vande Hei said his current rotation has been a great experience so far amid the excitement of the arriving Crew-3 of four astronauts on Nov. 11. (Vande Hei did not discuss a recent Russian anti-satellite test that forced all seven spaceflyers to take shelter a week ago, which is a sensitive topic given that Russia is one of the major partners on the ISS along with the U.S.)

Vande Hei instead focused on the collegiality of his crew, saying, “I’m just going to do whatever I can to show how thankful I am for my crewmates.” He added, “It’s wonderful having all these folks up here, and we haven’t been up here together that long, but wow. It sure has been wonderful already.”