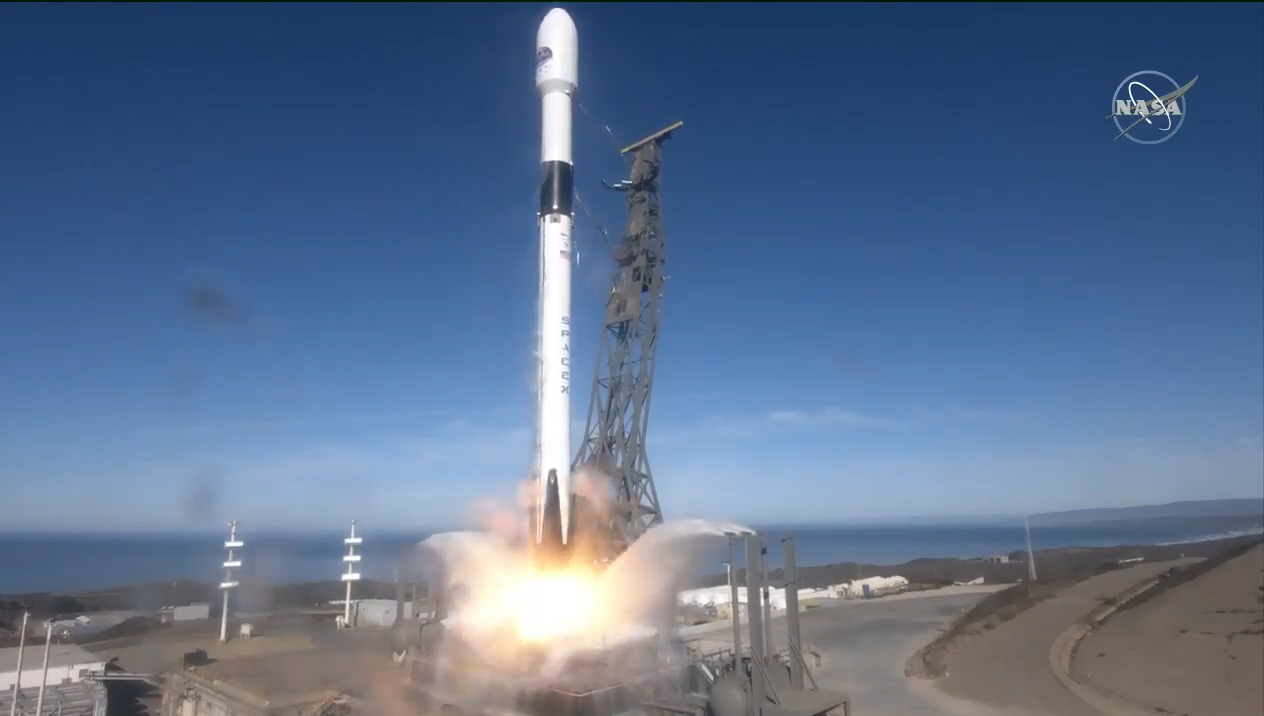 A SpaceX Falcon 9 rocket launched an advanced ocean-mapping satellite into orbit for NASA and the European Space Agency Saturday (Nov. 21) in a stunning morning launch from California.

The launch marked SpaceX’s SpaceX 22nd Falcon 9 this year. About nine minutes after liftoff, the rocket’s first stage returned to terra firma, capping off the flight with a successful landing.

The Sentinel-6 Michael Freilich satellite is named for Michael Freilich, the former head of NASA’s Earth science division who died of cancer in August. NASA and ESA named the satellite after Freilich in January before his death, a rare honor for a living scientist. Freilich’s family watched the launch in person, with son Daniel and daughter Sarah (with Freilich’s baby granddaughter Rosie) remembering their father after liftoff.

“It means so much to see it and feel it,” Daniel Freilich said of witnessing the launch in NASA’s live broadcast. “I’d heard him talking about feeling it.”

“It was gorgeous,” Sarah added. “I haven’t seen anything that gorgeous before.”

Built by Airbus in Germany, the satellite is roughly the size of a small pickup truck and carries multiple instruments to track changes in sea level down to just a few centimeters. To measure sea levels, they’ll beam electromagnetic signals down to the world’s oceans and then measure how long it takes for them to bounce back.

Mission scientists explained that rising sea levels are just one consequence of climate change, and data from previous Earth-observing satellites show that the rate of sea level rise is accelerating, so scientists want to be able to monitor it over an extended period of time.

This $97 million satellite is the first in what will be a pair of identical ocean-focused satellites; the next, Sentinel-6B, will launch in 2025. Together they will continue NASA’s three decade-long effort to document rising sea levels and will give scientists a more precise view of the coastlines than ever before.

The 2,628-lb. (1,192 kilograms) satellite follows in the footsteps of several other Earth science missions, including the Jason-3 satellite and the U.S.-French Topex/Poseidon mission that launched in 1992. From it’s orbital perch, the satellite will have a prime viewing location to measure the world’s oceans in great detail.

“The best front seat view on the oceans is from space,” Thomas Zurbuchen, head of science at NASA, said in a prelaunch science briefing Friday.

The Sentinel-6 satellite was successfully deployed from the Falcon 9 around 53 minutes into the mission.

With the data collected by Sentinel-6, scientists around the world will be able to make higher-resolution observations of the ocean much closer to shore. That means more precise weather forecasts can be made before storms make landfall. When a big storm develops over the ocean, the water buckles up. Satellites like Sentinel-6 are designed to detect that bubble of water rising and use that information for forecasts. The measurements could also be used to determine how changes in sea level near coastlines might affect ship navigation and commercial fishing.

Water expands when it heats up and we can see that with the rapidly melting glaciers and ice sheets. That water has to go somewhere, and as a result tides are beginning to creep further inland. The encroaching water means flooding and storm surges increase dramatically and become even more dangerous, especially when combined with hurricanes and other natural disasters.

“We’re watching the sea levels rise right before our very eyes,” said Josh Wills project scientist at JPL during the Friday briefing. “These satellites allow us to do that.”

The mission’s suite of scientific instruments includes two high-precision altimeters. One of which can measure changes in the height of the ocean’s surface to a resolution of only 0.75 inches (2 centimeters).

By tracking such tiny changes at the surface, scientists can get a better idea of underwater ocean currents around the world.

Sentinel-6’s measurements will be crucial to understanding what phenomena are causing rises in certain areas.

Today’s flight marks the first time a SpaceX rocket launched from California in 17 months (the company launched the three-satellite Radarsat mission for Canada in July 2019). With the vast majority of missions launching from Florida, SpaceX moved its second drone ship “Just Read the Instructions” over the East Coast, which has enabled the company to keep up a rapid launch pace.

So far this year, SpaceX has launched a total of 22 rockets in 2020 and successfully recovered 66 boosters since it first began recovery efforts. The majority of the missions have been on the backs of its fleet of veteran rockets. SpaceX has a total of 10 flight proven boosters in its arsenal, including the newly returned Crew-1 booster (which launched four astronauts for NASA on Nov. 15) and the booster used on today’’s flight. If all goes well with the inspections process, the boosters will be prepared for future missions.

In a switch from its typical drone ship catches, and because there is no drone ship on the West Coast, SpaceX’’s first stage booster returned to land today, marking the company’’s third land landing at its California facilities. The company warned locals that sonic booms may be heard crackling overhead as the booster made its way through the atmosphere.

SpaceX recovered its first booster in 2015, but really ramped up its recovery efforts in 2017 and began to regularly refly boosters. This year, the company reached a new milestone, having flown three new boosters compared to 19 flight proven ones.

When the upgraded Falcon 9 block 5 booster debuted, SpaceX CEO Elon Musk said that the rocket was made to fly at least 10 times with little to no refurbishment in between flights and as many as 100 times before being retired. He also said that eventually the company wanted to fly the same booster twice in a 24-hour period.

That milestone still hasn’’t happened but the teams have learned a lot about streamlining inspection processes and have reduced the down time between flights from several months to only a couple. The shortest time between flights to date is just under two months. That record goes to booster B1060, which launched two astronauts to the International Space Station in May, and then launched a communications satellite for South Korea’s military in July.

Today’s launch is first of two that SpaceX has planned for this weekend. If all goes as planned, the company will launch two rockets from two different coasts all in the same weekend.

SpaceX is currently targeting Sunday evening (Nov. 22) at 9:56 p.m. EST (0256 GMT on Nov. 23) for the launch of a fresh batch of Starlink internet satellites. This will mark the 16th flight of the internet-beaming satellites to date.

Editor’s note: This story was updated at 3:30 pm ET to reflect the successful deployment of Sentinel-6 Michael Freilich in orbit and include reactions from his children of the launch.