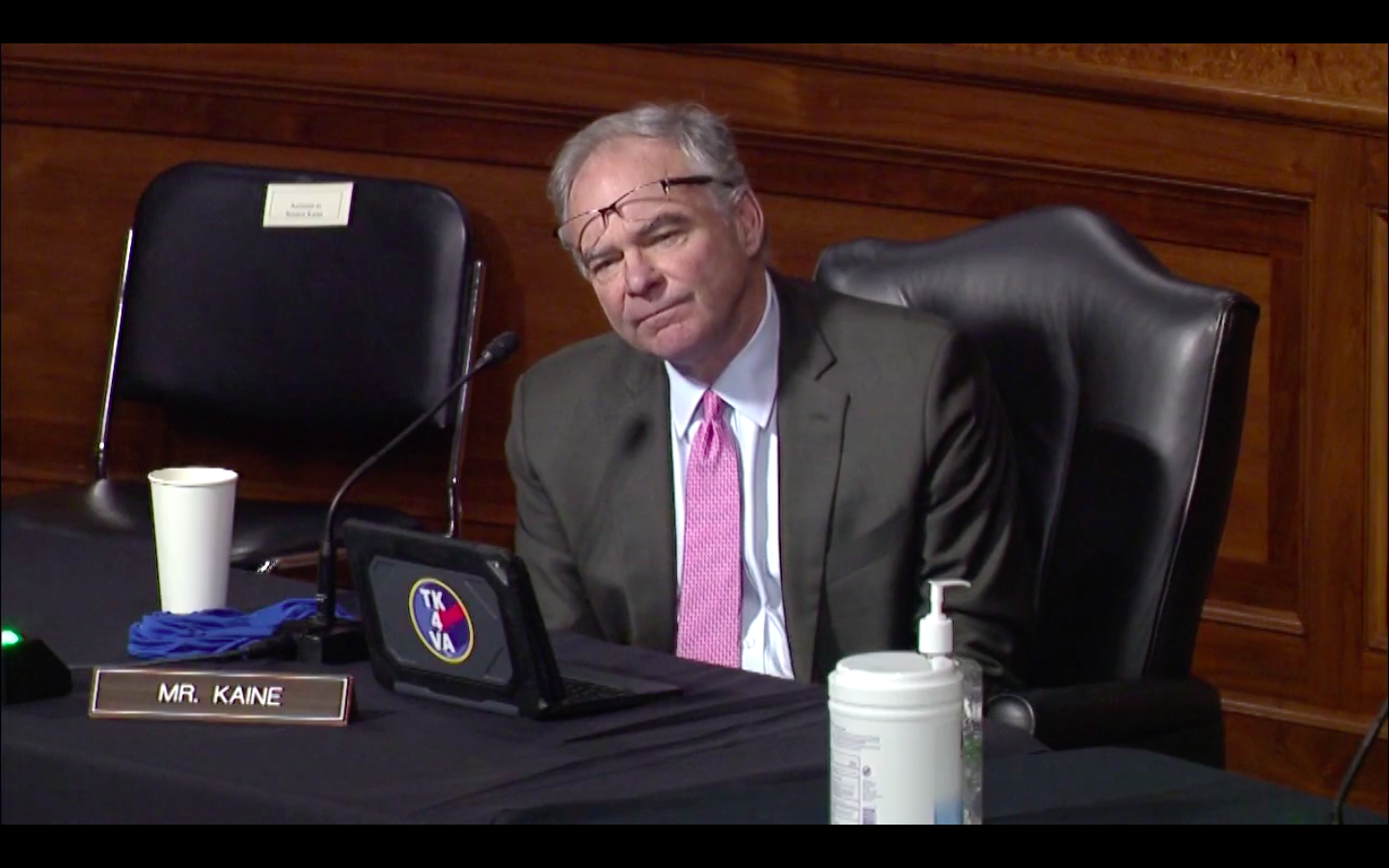 WASHINGTON: The Trump nom­i­nee to head the Pentagon’s Special Operations office told the Senate Armed Services Committee he didn’t know if a com­pa­ny whose board he sits on trained the Saudi killers of jour­nal­ist Jamal Khashoggi, putting his con­fir­ma­tion at risk.

Tim Kaine, a top Democratic sen­a­tor, said he would be uncom­fort­able moving for­ward with the nom­i­na­tion until those ques­tions are answered.

Louis Bremer, a self-described “Harley riding, tequi­la-drink­ing Navy SEAL” who retired some 20 years ago before head­ing into the world of finance, is a direc­tor of Cerberus Capital Management, an equity firm with a hand in the defense con­tract­ing world.

The com­pa­ny owns Tier 1 Group, a train­ing outfit which has trained Saudi forces in mil­i­tary tac­tics. A litany of published reports have tied the Saudis who mur­dered Khashoggi in a Saudi con­sulate in Turkey to the com­pa­ny, some­thing sev­er­al sen­a­tors pressed Bremer on.

Bremer told Kaine he “was not aware,” of any tie to the Khashoggi murder. “I do know what we have trained Saudi nation­als,” he said.

Pressed fur­ther, Bremer said, “I don’t have any rec­ol­lec­tion of that,” and he didn’t recall it ever coming up to the board. “There is the pos­si­bil­i­ty that we did have a dis­cus­sion about it a number of years ago — I could check my records and come back to you,” he said.

In a state­ment to Breaking Defense, Kaine expressed dis­sat­is­fac­tion with Bremer’s answers: “Senators deserve answers to my ques­tions about Tier 1’s role in train­ing any Saudis impli­cat­ed in the murder of Jamal Khashoggi. I don’t feel com­fort­able moving for­ward on this nom­i­na­tion until I get answers.”

Any delay will ensure that the post of Assistant Secretary of Defense for Special Operations/Low-Intensity Conflict (SOILIC), which has not had a Senate con­firmed chief since early 2019, would prob­a­bly remain staffed at an acting capac­i­ty.

Cerberus has long been involved in mil­i­tary con­tract­ing. It owns Dyncorp, a com­pa­ny that pro­vides secu­ri­ty and logis­tics across the globe for the Pentagon. CEO Steve Feinberg and Bremer have reportedly pitched to the White House plans to pro­vide a contractor stand-in force for American active duty troops in Afghanistan.

Cerberus is also work­ing with Australian ship­builder Austal to buy the ship repair facil­i­ty at Subic Bay in the Philippines. That would keep the port out of the hands of Chinese cor­po­ra­tions and enhance the abil­i­ty of American and Australian war­ships to oper­ate in the South China Sea.

Sen. Angus King, an Independent, joined Kaine in express­ing skep­ti­cism over Bremer’s memory lapse: “I find it incred­i­bly hard to believe the five-person board of this com­pa­ny wouldn’t have had a fire drill on this issue.”

“I will give you my com­mit­ment to go back and check the record with this,” Bremer replied. “I think it’s prob­a­bly likely that we did do some sort of inves­ti­ga­tion. I just don’t recall the specifics of that.”

Another issue that arose during the hear­ing were now-delet­ed social media posts Bremer made in which he referred to Hillary Clinton as “lying Killary Clinton,” and praised former Navy SEAL Eddie Gallagher, accused of war crimes by the men in his unit, as “my broth­er and my team­mate.” He also posted a picture of him­self and con­ser­v­a­tive provo­ca­teur Milo Yiannopoulos, who has praised pedeophil­ia and has ties to the white nation­al­ist move­ment, call­ing him “a bril­liant mind and staunch defend­er of con­ser­vatism.”

Sen. Jeanne Shaheen waded into the social media posts, telling Bremer, who talked repeat­ed­ly of restoring ethics to the SOF world after years of scan­dals: “I assume you agree with me this is not the kind of model we want to hold up to our spe­cial oper­a­tions forces.”

“Those were posts that I regret,” he replied. “They were flip­pant; they were in my capac­i­ty [in the] pri­vate sector. I’m now down to LinkedIn on social media and people who know me and have worked with me over the last 30 years, both in uni­form and out­side of uni­form, in the pri­vate sector know I’m a seri­ous person. I’m a busi­ness­man. I’m a nation­al secu­ri­ty pro­fes­sion­al.”

Today’s hear­ing comes a week after the chair­man of the Senate Armed Services Committee abrupt­ly can­celed a nom­i­na­tion hear­ing for Anthony Tata as the next Pentagon policy chief.

Sen. Jack Reed, the committee’s rank­ing Democrat, said “mem­bers on both sides of the aisle have raised seri­ous ques­tions about this nom­i­nee,” whose career skid­ded to a halt after an Army inves­ti­ga­tion con­clud­ed he had at least two extra­mar­i­tal affairs and falsified a legal doc­u­ment.

In the wake of the can­cel­la­tion, the Trump admin­is­tra­tion made an end-run around Congress, appoint­ing Tata to a tem­po­rary senior posi­tion in the same Pentagon office. If he stays in that posi­tion for 90 days, he can slide into the orig­i­nal job as an acting offi­cial, with­out Senate approval. The White House offi­cial­ly with­drew his nom­i­na­tion on Monday, sig­nal­ing that this was indeed the plan.

If Bremer is con­firmed, he would replace Owen West, who left the office in early 2019. Thomas Alexander has been per­form­ing the duties of the ASD since West’s depar­ture.