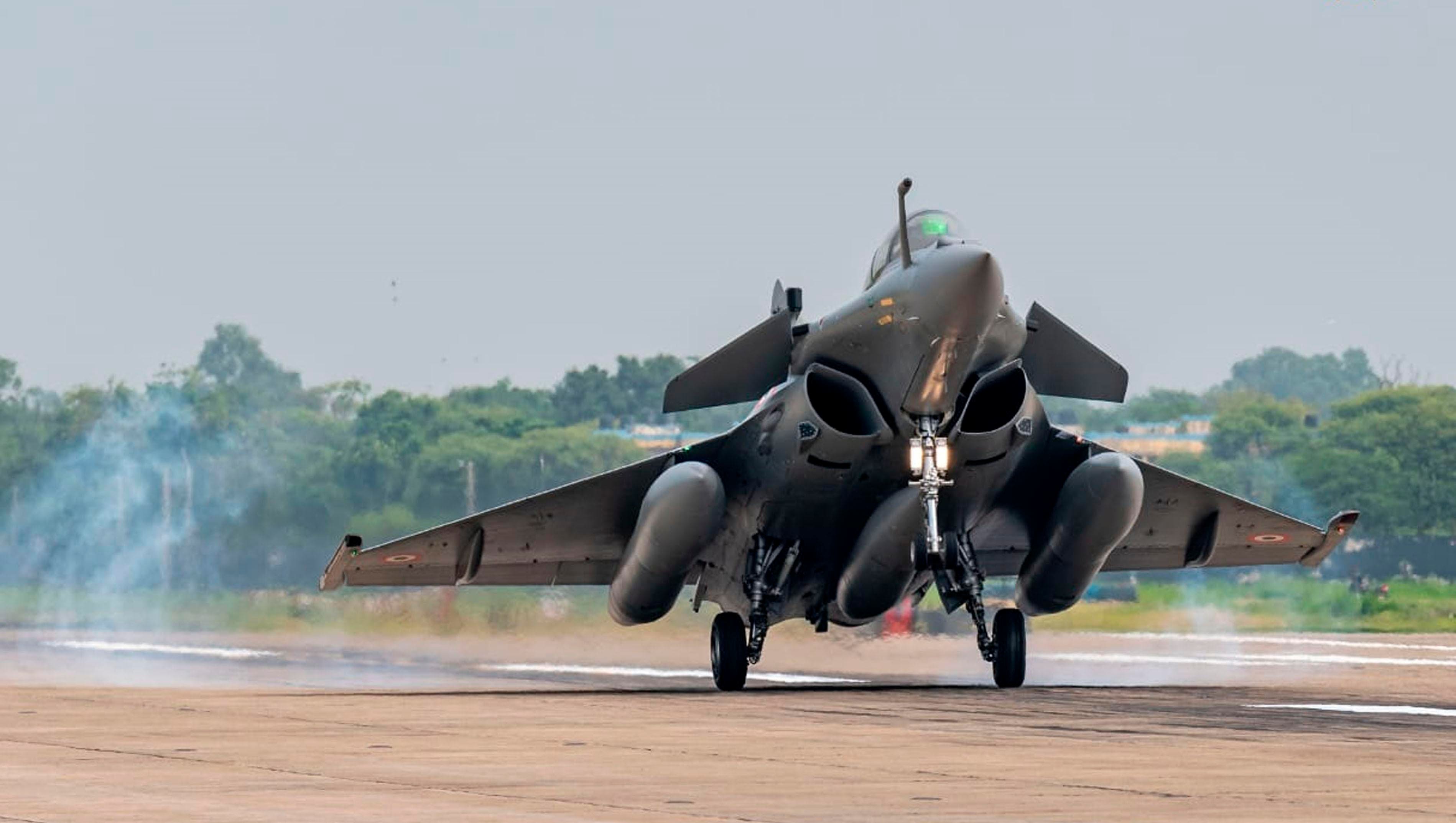 In the wake of border clash­es between India and China, the Indian Air Force has received pow­er­ful rein­force­ments.

Five French-made Rafale fighters have arrived in India, the first of 36 jets that will boost Indian air­pow­er should minor border clash­es with China esca­late into more seri­ous hos­til­i­ties.

Not sur­pris­ing­ly, the first Rafales will be deployed at the Ambala air­base in north­ern India. Ambala is about 300 miles from the Indian ter­ri­to­ry of Ladakh, where dozens of Indian and Chinese sol­diers died in June after clashes over a border zone claimed by both nations. The Rafales will be a wel­come addi­tion to the less advanced Indian Navy MiG-29Ks that already have been deployed to the region.

The Dassault Rafale is a delta-wing, single-seat, twin-engine fight­er already used by the French Navy and Air Force, as well as Egypt and Qatar. The 10-ton Rafale is con­sid­ered a 4.5‑generation fight­er that is some­what stealthy, though less so than the fifth-gen­er­a­tion U.S. F‑35. On the other hand, it is far more maneu­ver­able in a close-range dog­fight than an F‑35. The Rafale can also shoot down Chinese air­craft at long range using the deadly Meteor, a ramjet-pow­ered, radar-guided, beyond visual range (BVR) air-to-air mis­sile with an esti­mat­ed range of more than 50 miles. The Rafale’s for­mi­da­ble arse­nal also includes also car­ries the Scalp stand­off air-to-ground mis­sile, plus an advanced Active Electronically Scanned Array (AESA) radar and a Spectra jam­ming system. The Rafale can also “super­cruise,” mean­ing it can fly at super­son­ic speed with­out devour­ing huge amounts of fuel.

How do India’s Rafales com­pare to poten­tial Chinese adver­saries? The People’s Liberation Army Air Force (PLAAF) has deployed 24 J‑11 or J‑16 fight­ers at Hotan air­base in China’s Xinjiang region, near Ladakh. The 16-ton J‑11 is a Chinese copy of Russia’s Cold War Su-27 Flanker fight­er, while the J‑16 is a 20-ton ver­sion of the Su-30MKK. Both are larger, heav­ier and longer-ranged than the Rafale, and really more com­pa­ra­ble in per­for­mance – and appear­ance – to the American F‑15 Eagle and F‑15E Strike Eagle (the Rafale some­what resem­bles the nimble U.S. F‑16).

In addi­tion, there is always the pos­si­bil­i­ty that China will deploy the new J‑20, a stealth fight­er that China’s answer to the American F‑35 and Russia’s Su-57. Despite the hype over its stealth fea­tures, exact­ly what the J‑20 is capa­ble of remains to be seen. Indian media claims the Rafale is superior to any Chinese fight­er, point­ing to issues such as unre­li­able Chinese air­craft engines.

“Rafale is far supe­ri­or to the J‑20, the Chengdu fight­er of China,” a former Indian Air Force com­man­der told Indian media. “Even though it’s mar­ket­ed as a fifth-gen­er­a­tion jet, it [the J‑20] is prob­a­bly at best a 3.5- gen­er­a­tion air­craft. It’s got a third-gen­er­a­tion engine as we have in the Sukhoi [India’s Russian-made Su-30MKI].”

So which fight­er is tech­ni­cal­ly best? The answer is that it prob­a­bly doesn’t matter. Both sides are field­ing very capa­ble air­craft with advanced sen­sors and mis­siles. . Given that China and India are both nuclear-armed nations, any clash between rival air­craft would likely be small and care­ful­ly con­trolled to avoid esca­la­tion. In that kind of sit­u­a­tion, which fight­er emerges vic­to­ri­ous in air combat may depend less on maneu­ver­abil­i­ty and stealth, and more on fac­tors such as pilot qual­i­ty, the pres­ence of ground-based air defense radars, anti-air­craft mis­siles, com­mand and con­trol net­works, and the avail­abil­i­ty of aerial refu­el­ing air­craft.

Either way, deploy­ing just five Rafales to Ladakh is more sym­bol­ic than sub­stan­tive. It will send a mes­sage to China, Arzan Tarapore, a non-res­i­dent fellow at the U.S.-based National Institute of Asian Research think­tank, tells me. “In addi­tion to send­ing a signal of resolve, India is keen to build up an oper­a­tional Rafale force over the course of this lengthy crisis. This gives it options. Should the crisis take a turn for the worse sev­er­al months from now, say next summer, India will have spent the inter­ven­ing time wisely to build up its capa­bil­i­ties.”

Russia Is Eager To Sell Its Sophisticated T-14 Armata Tank. Will Anyone Buy It?