Ship Fire Is Out as Investigations Begin 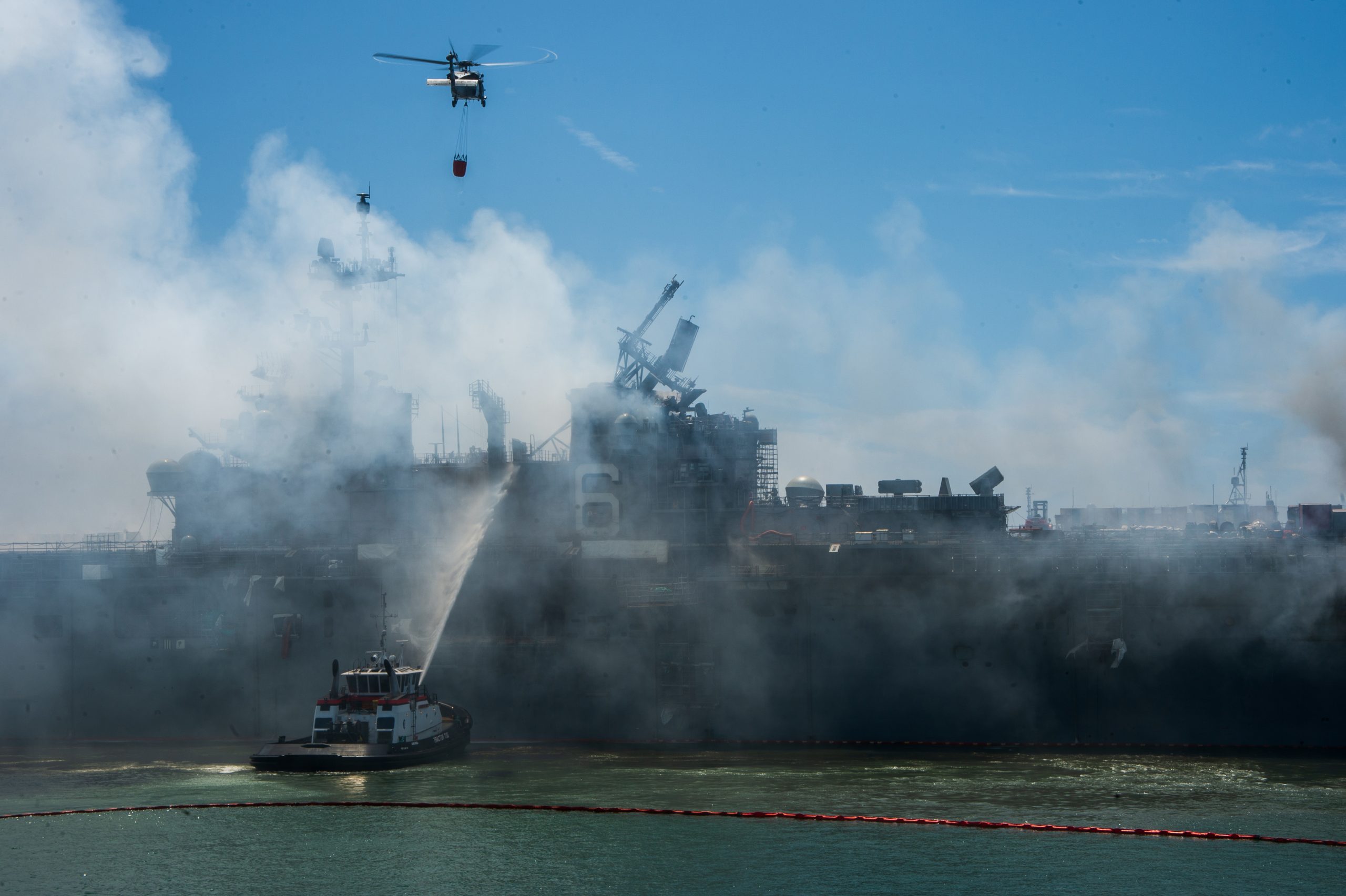 “The flames are out but the heat is still there,” Rear Adm. Philip Sobeck told reporters Thursday afternoon in San Diego. “We’re going space by space into every compartment checking for hotspots.”

That’s where the situation stands after a fire that ravaged USS Bonhomme Richard for four days and into a fifth was finally declared out midday on 16 July. Tugs and helicopters that dumped water on the ship have been withdrawn and the smoke has stopped emanating from the ship berthed at the 32nd Street Naval Base. The ship is clearly listing to port, towards the pier, a shift from Wednesday when the list was to starboard.

After praising the efforts of sailors and civilian firefighters Sobeck was asked multiple questions about the ship’s status and future.

“The ship can be repaired. Whether or not it will be repaired will be determined,” he said.

“Visibly you can see one of the challenges. Other than fire the tough thing to deal with is the free surface effect where water can go from either side of the ship. That brings challenges as to how the ship tends. Overnight we had a starboard list and now visibly you can see a port list. We saw that surface effect. We can control it by dewatering and that’s what were in the progress of doing. The ship is stable now and she rests very comfortably.

“Fire has gone throughout the ship,” Sobeck added. “From bow to stern there was fire. From the main deck and above is where most of the damage is.”

Sobeck noted that 85 sailors had moved back on board the ship before the fire, although more than 160 were on board Sunday morning when the fire broke out. Asked whether the crew had drilled for fire aboard the Bonhomme Richard, he replied, “I don’t have that information but it would be recently.”

Asked about the smoke and stench from the fire that has permeated the air around San Diego, Sobeck and a Navy environmental specialist said it was likely from “insulation, padded walls, miles of cables and piping … along with paint.” Sobeck added that “paper, linens, mattresses would be burning. Decking material would also retain some of the heat. That’s what caused a lot of the billowing and grey smoke.”

Sobeck noted that at least three investigations would likely begin. The Navy Safety Center will investigate safety concerns and procedures. Naval Sea Systems Command will look at the effects of the ship’s design on the conflagration.

Heading the overall investigation, he said, would be commander U.S. Pacific Fleet.

The investigations, he said, will last “as long as it takes to get the answers we need.”