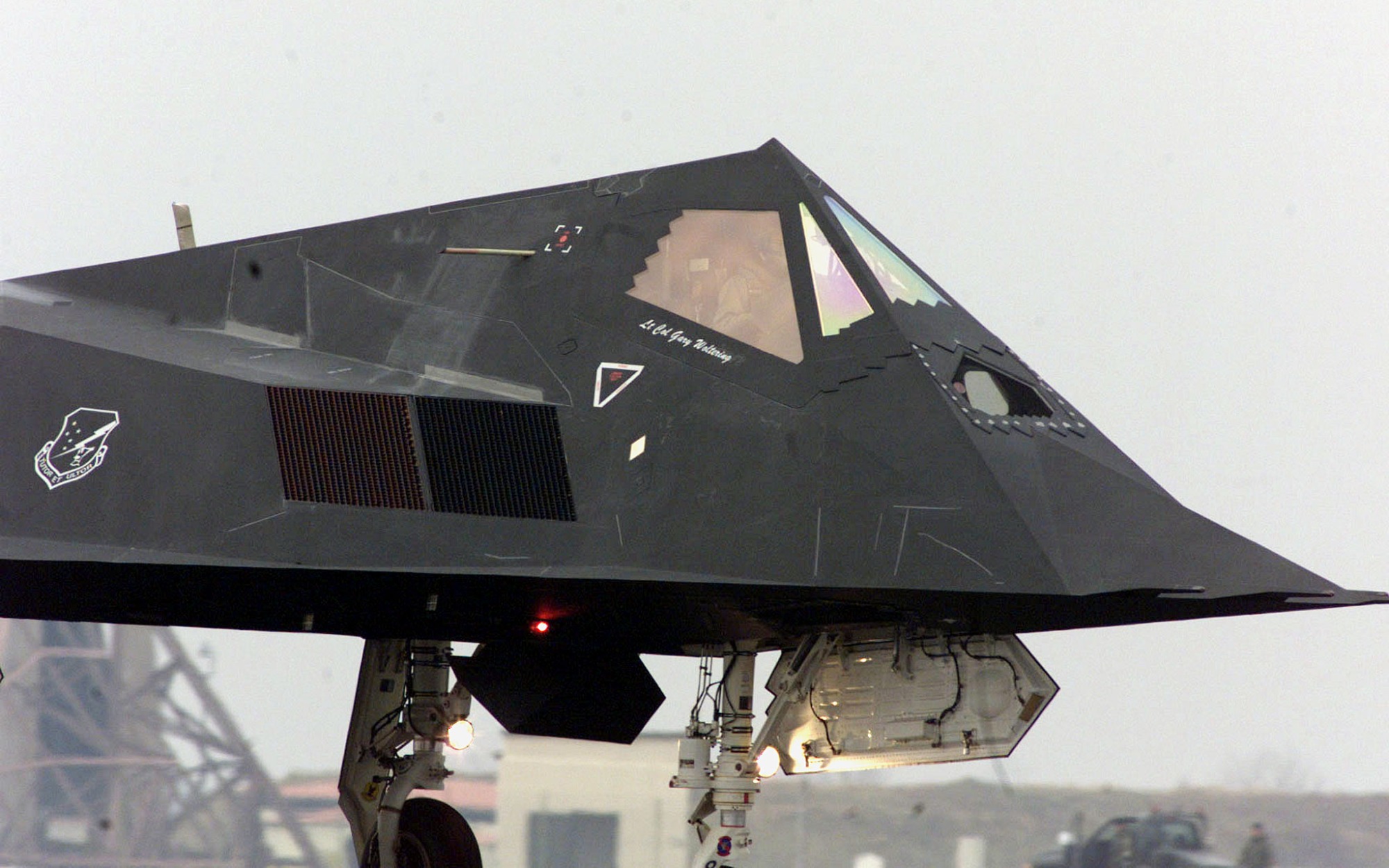 The introduction of the F-117 Nighthawk was a watershed moment in military aviation. After years of competing to field faster moving, higher flying aircraft that could outrun or out climb enemy air defenses, the Nighthawk adopted a new approach to fighting in contested airspace: stealth. Using the most powerful computers of the era, Lockheed’s Skunk Works developed an aircraft that could elude enemy defenses, rather than defeat them through brute strength.

Despite some common misconceptions, stealth is not a single technology, but rather a whole slew of overlapping technologies, production methodologies, and battlefield strategies. No stealth aircraft, not even today’s advanced F-35 Joint Strike Fighter, is truly invisible to radar or infrared detection. However, well designed stealth aircraft will delay detection for as long as possible while also making it extremely difficult to secure a “weapons-grade” lock. In other words, even when enemy forces are aware that a stealth jet is in their airspace, they’ll have a heck of a time trying to shoot it down.

Despite first taking to the skies in 1981, the U.S. Air Force didn’t acknowledge the existence of the world’s first operational stealth plane until 1988–five years after the F-117 fully entered service. The world, however, was already vaguely aware that Uncle Sam was keeping some exotic-looking secrets in the hangars of Area 51. Before the F-117 was even unveiled to the public, software developer MicroProse has already released a video game based on the Nighthawk, called “F-19 Stealth Fighter.” It was called the F-19 by the game developers because the Air Force hasn’t revealed the Nighthawk’s real name yet and most assumed the next jet to join the branch would be dubbed the F-19.

Of course, the “F” prefix in F-117 was a misnomer by design. Despite the Nighthawk’s incredible ability to sneak past enemy defenses, technological limitations at the time of its development meant the new “stealth fighter” was no fighter at all. More aptly considered an attack aircraft, the F-117 had no onboard radar, limited speed and acrobatic capabilities, and a payload capacity of just two bombs. Still, despite the platform’s clear limitations, Lockheed pitched the idea of a practically all-new iteration meant for duty on the U.S. Navy’s supercarriers. The program, dubbed F-117N Seahawk, would have resulted in the most capable and advanced stealth aircraft of its day, and would have put the Air Force’s F-117 to shame.

Lockheed’s plan for the F-117N Seahawk

In 1993, four years after the U.S. Air Force unveiled the Nighthawk to the world, Lockheed approached the U.S. Navy with a proposal for a carrier-based iteration of the famed “stealth fighter.” This new F-117N would be a low-observable (stealth) all-weather strike aircraft. At the time, it seemed like a logical progression for America’s air power.

While the Navy was operating F/A-18 Hornets and F-14 Tomcats, these fourth-generation fighters were anything but stealthy. And while the Hornet was intended to serve in both a fighter and an attack role (hence the F/A prefix), the F-14 was largely intended to serve as an intercept fighter for Soviet nuclear bombers. An F-117 would have offered the Navy a significant capability jump, provided they could make it work on carriers.

The initial proposal wasn’t all that different from the Air Force’s Nighthawk, with the addition of an automated carrier landing system and a corrosion-resistant coating to combat the seawater the new aircraft would be exposed to. The Navy, however, was more interested in high-speed, multi-role platforms than the highly-specialized Nighthawk, and they rejected the proposal outright. Likewise rejected by the Royal Air Force, Lockheed went back to the drawing board to create another F-117 for sea duty, this time including a slew of upgrades and improvements.

Seemingly aware that the operational F-117 wasn’t the most capable combat aircraft, Lockheed’s new pitch offered a drastically improved iteration of the platform, complete double the internal payload capacity of the first. The wings would be given a 42-degree sweep, rather than the Nighthawk’s 50-degree, and would extend out 50% further, to 64 feet. At the tail of the aircraft, additional horizontal ailerons were added to make it more manageable at the low speeds required for carrier landings.

Like the first proposal, this new Seahawk would also include the automated carrier landing system, heavier duty landing gear, and the tail hook required for short landings at sea. During flight, the tailhook would be stowed internally to prevent it from compromising the aircraft’s stealth. The wings themselves would be designed to fold up like many other carrier-based fighters, allowing for easier storage.

Not satisfied with the Nighthawk’s top speed of right around 680 miles per hour, Lockheed looked to the more powerful F114 engines that would later find a home in the Super Hornet. These afterburning turbofans built by GE produced 13,000-pound-feet of thrust under normal operation and as much as 22,000-pound-feet with the afterburner engaged. Using a pair of these engines in the Seahawk would have made it significantly faster than its Air Force sister, and potentially could have pushed all the way into supersonic flight.

In order to address the limited payload capacity of the first F-117, this new F-117N would leverage its more powerful engines and larger weapons bay to carry more munitions than ever before, including air-to-air missiles on the inside of each weapons bay door. The carrier-based Seahawk’s missiles would take their cues from a multi-mode air-to-air and air-to-ground radar and an Infrared Search and Tracking System (IRST) comparable to what can be found in many fighter jets. In other words, this new “stealth fighter” would have actually been a real stealth fighter.

Lockheed also said they could increase the payload capacity even further, using a bulging bombay door to increase the payload to 10,000 pounds (as opposed to the F-117A’s 2,000-pound limit), and external hardpoints similar to those leveraged on the F-35 and F-22 would have allowed for an additional 8,000 pounds of external munitions. Of course, while carrying those external weapons, the aircraft’s stealth profile would be compromised.

In 1995, Lockheed reportedly pitched the Seahawk to the U.S. Navy at a per-unit price of $70 million, assuming an order of 255 airframes. Part of the sales pitch was the understanding that this new Seahawk would not be relegated strictly to its Air Force sibling’s attack role. Thanks to its larger payload, higher top speed, and fighter-like avionics, the Navy’s own F-117 would truly be a multi-role fighter… But it was in that approach that the Seahawk’s failings would become more evident.

The originally F-117 Nighthawk was born out of the Have Blue technology demonstrator program, which itself grew out of a computer-generated form mathematically designed by DARPA (the Defense Advanced Research Projects Agency) to reflect electromagnetic waves (like those leveraged by radar). The limited computing power available at the time forced the strangely angular design, which those involved in the effort jokingly referred to as the “hopeless diamond.”

While the Nighthawk did prove airworthy, it prioritized stealth over in-flight performance, and as a result, could be a real handful to fly. Even with more powerful engines and more weapons at its disposal, the F-117’s design could only do so much. It was soon clear that an entirely new stealth fighter platform could leverage more advanced computing technology to create a fighter that was both stealthy and highly capable — a concept Lockheed themselves proved just two years later when their F-22 Raptor first began test flights. Soon thereafter, the Navy would throw in on the Pentagon’s new Joint Strike Fighter program, aiming to make one stealth jet that could meet the needs of the Navy, Air Force, and Marines. That program, of course, would go on to develop the F-35.

While the F-117N Seahawk never came to fruition, the premise itself offers a unique insight into the early days of stealth. Aviation technology was advancing so rapidly throughout the Cold War and immediately thereafter that by the time the Navy had a chance to seriously consider fielding stealth jets on their carriers, America’s top-tier stealth platform was already too dated to be practical. Of course, it is also worth noting that stealth platforms wouldn’t find their way onto American carriers for nearly three more decades, showing just how advanced the Seahawk was at the time.

If you’re interested in other carrier-capable fighters that weren’t to be, check out our coverage of the Sea Raptor, which would have been a carrier-based iteration of Lockheed Martin’s F-22 Raptor. These proposals didn’t make it into production, but for a time, it was conceivable that America’s flattops would be sailing with F-117s and F-22s aboard, rather than Super Hornets and Joint Strike Fighters.