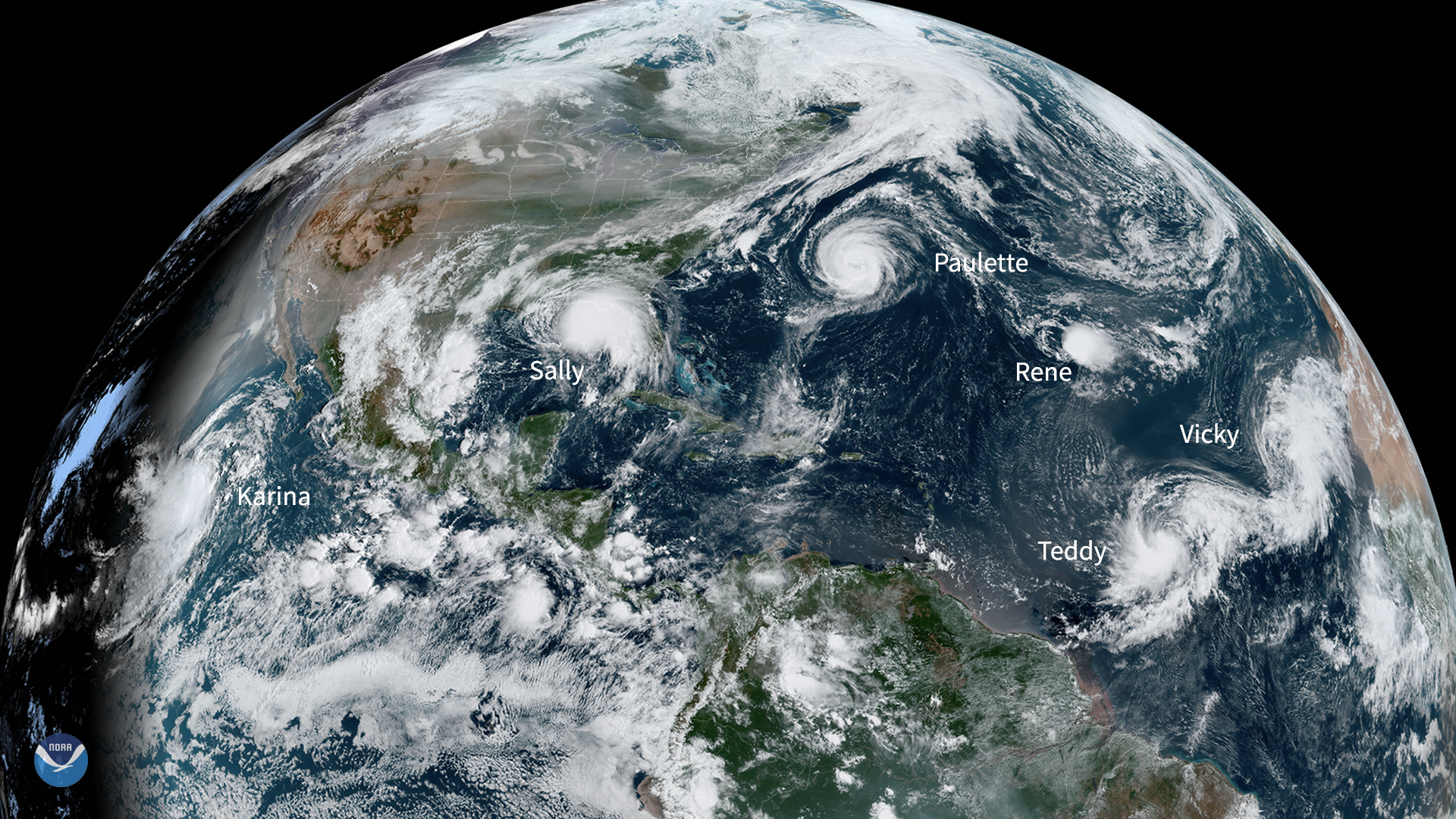 Hurricane Sally is bar­rel­ing towards land as five other storms swirl on Earth’s sur­face, satel­lites have spot­ted from space.

As of Monday (Sept. 14), with data from NASA’s Aqua satel­lite, Tropical Storm Sally was reclas­si­fied as a hur­ri­cane. The hur­ri­cane is moving over the north-cen­tral Gulf of Mexico today (Sept. 15) and is expect­ed to con­tin­ue moving towards Louisiana and make land­fall some­time today (either during the after­noon or this evening). According to NOAA (National Oceanic and Atmospheric Administration), as of 8 p.m. EDT (2400 GMT) Monday, Sally was a Category 2 storm, had sus­tained winds of 100 mph (161 kph) and was moving at 5 mph (8 kph).

The storm con­tin­ues to be mon­i­tored by the Atmospheric Infrared Sounder (AIRS) instru­ment on NASA’s Aqua satel­lite, which launched May 4, 2002 to observe Earth as part of the Earth Observing System (EOS). In addi­tion to Sally, five other storms are brewing on planet Earth — Sally, Paulette, Rene, Teddy and Vicky in the Atlantic Ocean, and Karina in the Pacific Ocean. This is the first time since 1971 that there have been five named storms at once in the Atlantic Ocean.

Related: No, we can't control hurricanes from space

NOAA’s GOES-East geo­sta­tion­ary satel­lite (for­mer­ly known as GOES-16)  is also track­ing the storms, mon­i­tor­ing how they’re grow­ing and moving and where they might be headed next. GOES-East orbits over 22,000 miles (35,405 kilo­me­ters) above Earth, keep­ing an eye on North America, Mexico, Central and South America, the Caribbean and the Atlantic Ocean stretch­ing out to Africa.

In a tweet posted Monday, NOAA shared a video taken by GOES-16 of Hurricane Sally. In the video,  you can see the hur­ri­cane’s “bub­bling clouds and #light­ning,” NOAA tweeted.

On Sept. 14, 2020, the #GOESEast satel­lite zoomed in on Hurricanes #Sally, near the Gulf Coast, and #Paulette, over the Atlantic. We can also see a blan­ket of hazy gray smoke from west­ern #wild­fires drift­ing over most of the coun­try. pic.twitter.com/eHytjWqiq8September 15, 2020

Other satel­lites also con­tin­ue to mon­i­tor the array of storms, includ­ing NASA-NOAA’s Suomi NPP satel­lite, which mon­i­tors the weath­er so using its Visible Infrared Imaging Radiometer Suite (VIIRS). On Monday, VIIRS spot­ted Hurricane Paulette at night­time (1:30 a.m. EDT; 0530 GMT), show­ing a clear image of the stor­m’s eye. At that time, Paulette’s large eye was approach­ing the island of Bermuda, for which there is a hur­ri­cane warn­ing in effect, according to NASA.

TROPICAL UPDATE: As the sun sets over the East Coast this evening, @NOAA’s #GOES16🛰️ is track­ing the bub­bling clouds and #light­ning from #HurricaneSally. As of 8 pm EDT, #Sally had sus­tained winds of 100 mph (Cat. 2) and was moving WNW at 5 mph. Latest: https://t.co/VTAp4gGkHs. pic.twitter.com/76TxykrVMMSeptember 15, 2020

Yesterday, anoth­er storm made progress in the Atlantic as Tropical Depression Vicky strength­ened into Tropical Storm Vicky. Aqua has been fol­low­ing the storm, show­ing that, as of Sunday (Sept. 13), the stor­m’s cold­est cloud top tem­per­a­tures were as low as (or lower than) 63 degrees Fahrenheit (minus 53 degrees Celsius) in their cen­ters. And, according to NASA, such cold tem­per­a­tures could indi­cate the stor­m’s abil­i­ty to gen­er­ate heavy rains.

Just last month, Jim Yoe, a sci­en­tist with NOAA’s National Weather Service, told Space.com that NOAA was pre­dict­ing this to be “an above aver­age hur­ri­cane season.” The Atlantic hur­ri­cane season, which stretch­es from June 1 to Nov. 30, is cur­rent­ly in full swing.

This year there is “an extreme­ly high prob­a­bil­i­ty of having an active season,” Yoe said. “The stage has really [been] set for having a lot of hur­ri­canes for this year.”