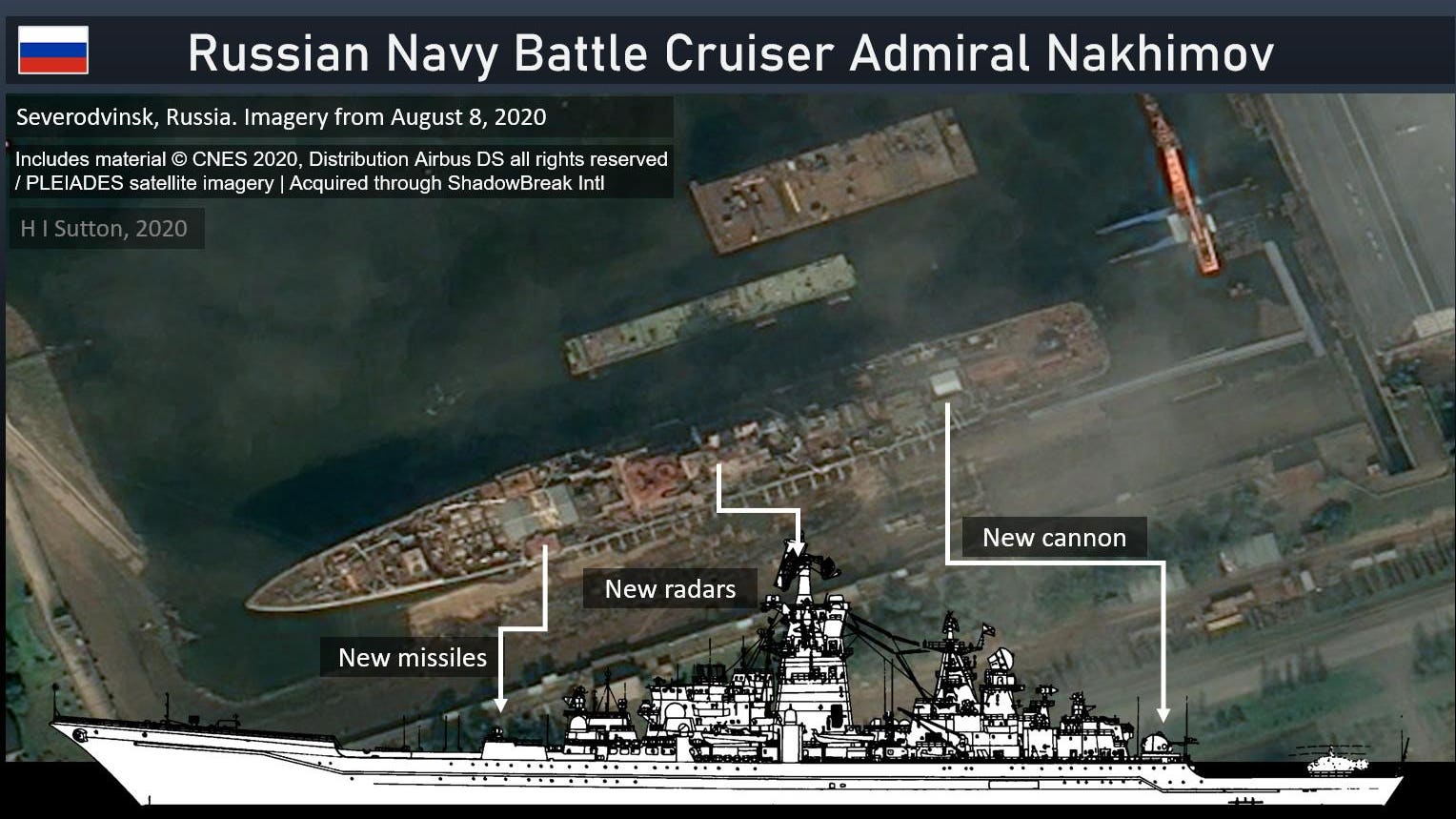 The Russia Navy’s most pow­er­ful war­ship, the battle cruis­er Admiral Nakhimov, may be about to be relaunched. It is part of a mas­sive mod­ern­iza­tion which will see it armed with new weapons. The nuclear-pow­ered ship is almost as large as the famous Iowa Class bat­tle­ships of the U.S. Navy. But it is con­sid­er­ably more modern in arma­ment and think­ing. With the latest weapons and sen­sors it will be, arguably, the most pow­er­ful sur­face com­bat­ant in the world.

‘Battle Cruiser’ is not a cat­e­go­ry of war­ship that is used very often, not since World War Two. Like bat­tle­ships, modern war­ships just do not stack up to these titles. Except for the Project 1144.2 Kirov Class nuclear cruis­ers, of which Admiral Nakhimov is one. These were built at the later of the Cold War to spec­i­fi­ca­tions which dwarf any other sur­face com­bat­ant then or now.

They are armed with an incred­i­ble array of weapons. Their main ‘car­ri­er killer’ arma­ment were 20 giant P‑700 Granite super­son­ic mis­siles. Against air threats they car­ried 96 S‑300 long-range mis­siles and 40 9K33 Osa short-range mis­siles. Then there were no less than six Kashtan close-in-weapons-sys­tems (CIWS). Each has two 30mm Gatling guns and eight 9M311 short range mis­siles, plus 24 reloads for a total of 192 mis­siles.

Because of the size and com­plex­i­ty these ves­sels are incred­i­bly expen­sive to crew and main­tain. Of the four orig­i­nal­ly built (out of five planned), only two are still in ser­vice. The other one, Peter the Great (’Pyotr Velikiy’) is with the Russian Navy’s arctic based Northern Fleet. That ship is newer and already equipped with com­par­a­tive­ly modern sys­tems.

So the ship was due mod­ern­iza­tion. Although the Kirov Class battle cruis­ers are impres­sive war­ships, much of their orig­i­nal tech­nol­o­gy is anti­quat­ed today. The mod­ern­iza­tion should bring her back up to date.

According to Russian state media RIA Novosti, she will be armed with the 3M22 Zircron hyper­son­ic anti-ship mis­sile. This is an ultra-modern weapon which is becom­ing a pri­or­i­ty system for the resur­gent Russian Navy. President Putin emphasizes this weapon, most recent­ly during his Navy Day speech in St. Petersburg. Zircon is much small­er than the orig­i­nal P‑700 Granite mis­siles so pos­si­bly more will be car­ried. Based on a mod­ern­iza­tion to the Oscar-II class submarine, three Zircon could be car­ried for each Granite, so a total of 60 mis­siles.

It is unknown whether the Kalibr land-attack cruise mis­sile or Oniks dual-pur­pose anti-ship and land attack mis­sile will be car­ried. But given that they are some­times loaded inter­change­ably with Zircon this is a dis­tinct pos­si­bil­i­ty. These would give Admiral Nakhimov a greater land-attack capa­bil­i­ty than her sister-ship Peter the Great.

RIA Novosti also says that the main air defense com­plex will be upgrad­ed to the Fort‑M system, which is a more advanced ver­sion of the S‑300. That system is still about 30 years old and doesn’t com­pare to the latest S‑350 or S‑400 sys­tems. But those have not been fitted to ships so it might be a ques­tion of devel­op­ment cost. Either way, Fort‑M is a rep­utable system.

Other upgrades include more modern close in air defens­es and anti-sub­ma­rine arma­ment. I expect that her mas­sive twin 130mm main gun might be replaced with the newer single-barrel AK-192 gun.

There are indi­ca­tions that the mighty war­ship might be launched very soon. Russian media report­ed (in Russian) that the basin where the ship is being worked on is slowly being flood­ed. And I had been observ­ing this through open sources. Recent satel­lite imagery shows that she is still a con­struc­tion sight though. So she may need sev­er­al years along­side in Severodvinsk after launch before the mod­ern­iza­tion is com­plete.