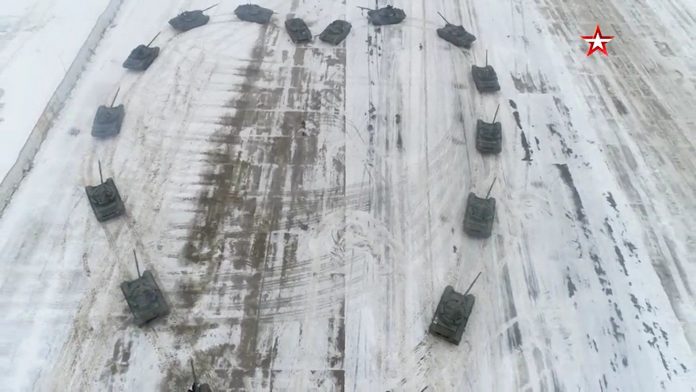 A Russian sol­dier has pulled out all the stops to pro­pose to his girl­friend, with his fellow offi­cers maneu­ver­ing 16 tanks to sur­round the couple in a heart shape.

The high-octane roman­tic stunt was filmed in a video pub­lished by the defence min­istry on Friday, Valentine’s Day.

As snow fell, the T‑72B3 tanks rolled into posi­tion on the Alabino train­ing ground out­side Moscow.

Lieutenant Denis Kazantsev led his long-term part­ner Alexandra Kopytova into the centre as she held her hands over her eyes, the defence ministry’s TV chan­nel Zvezda report­ed.

Kazantsev, a pla­toon com­man­der, went down on bended knee, hold­ing a bunch of red roses.

“We’ve been togeth­er a very long time. We’ve stood the test of time and dis­tance. Marry me!” he said as his girl­friend nodded silent­ly. He then put a ring on her finger.

The tanks used for the roman­tic manoeu­vre also take part in the annual Victory Parade on Red Square, Zvezda report­ed.

“No one has ever seen such a large-scale pro­pos­al,” its reporter said.