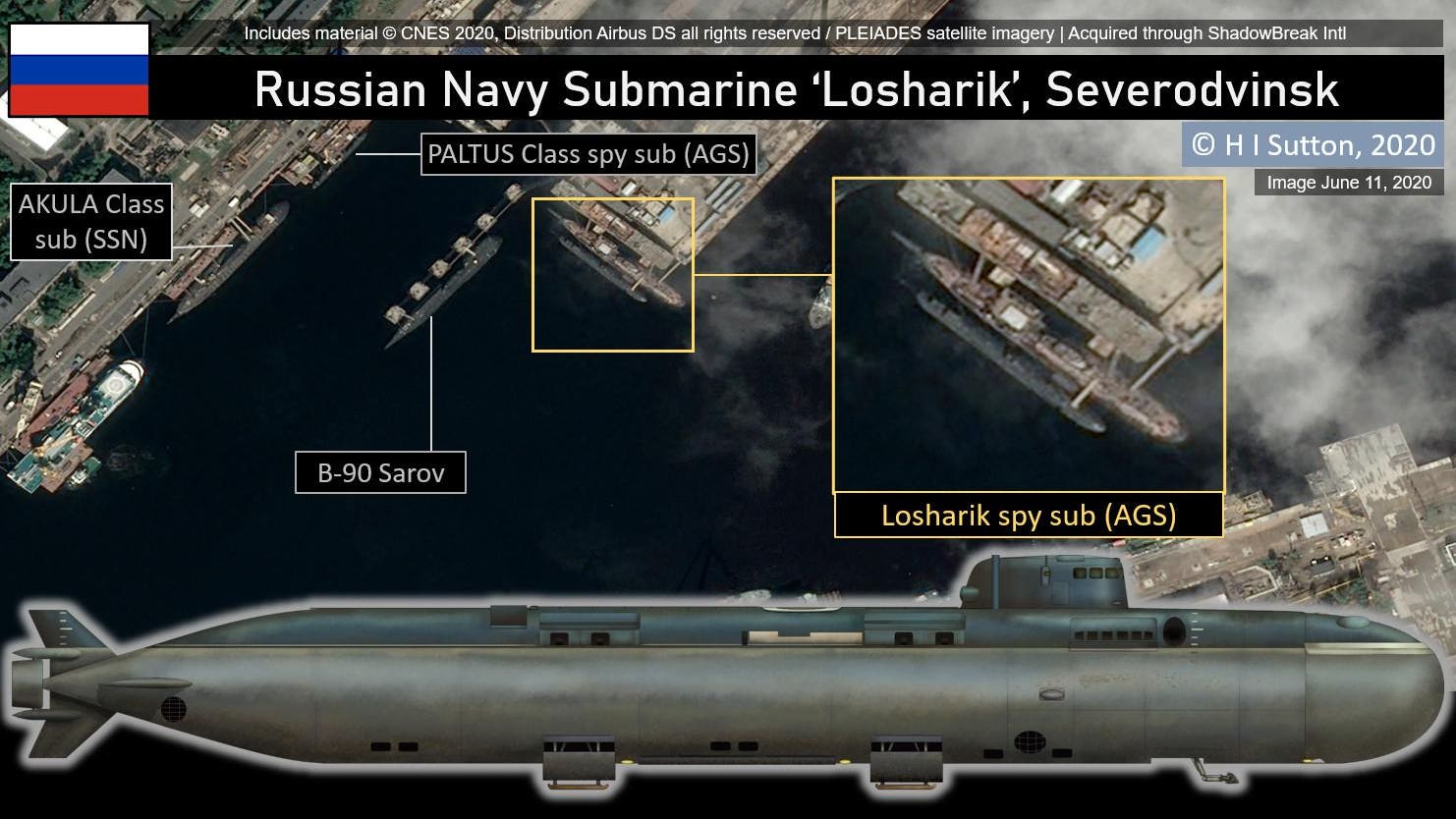 A year after a fatal acci­dent aboard the nuclear pow­ered sub­ma­rine Losharik, the sub­ma­rine remains out of ser­vice. The acci­dent cost 14 elite ‘hydronauts’ their lives, and dam­aged the tita­ni­um-hulled sub­ma­rine. While the inter­na­tion­al sub­ma­rine com­mu­ni­ty is united in solemn­ly remem­ber­ing those who per­ished, Western navies will be taking stock. The acci­dent will likely have a knock-on effect on the Russian Navy’s massive modernization program. Most at risk is the sub­ma­rine Belgorod. 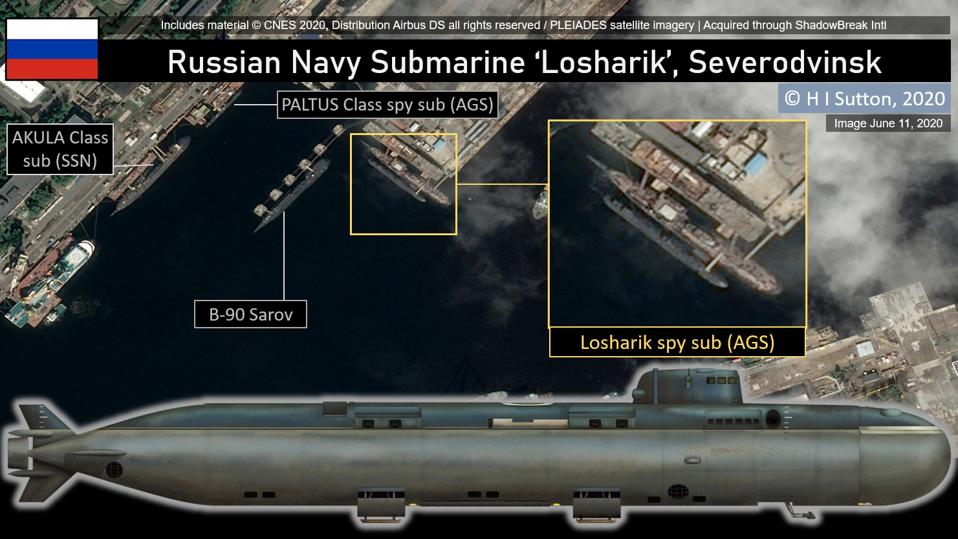 Russia’s spy sub­ma­rine ‘Losharik’ is cur­rent­ly under­go­ing repairs in Severodvinsk. In this satel­lite … [+] image it can be seen moored out­side a repair work­shop. it was moved a few days later.

On Sunday July 5 a cer­e­mo­ny was held at the Serafimovsky Cemetery in Saint Petersburg. At the same time that a mon­u­ment was was being unveiled by Vice Admiral Igor Mukhametshin, Deputy Commander-in-Chief of the Russian Navy, the sub­ma­rine was moored in Severodvinsk wait­ing for repairs to be com­plet­ed.

The memo­r­i­al is 650 miles south of where the acci­dent hap­pened, but close to the home of Russia’s secre­tive GUGI orga­ni­za­tion. GUGI stands for Main Directorate of Deep-Sea Research, is seen as an espi­onage orga­ni­za­tion. Although the sub­ma­rine is part of the Russian Navy, its mis­sion is driven by GUGI.

The mis­sions of these sub­marines is steeped in mys­tery and secre­cy. It is the kind of thing that is only really dis­cussed in euphemism by the defense com­mu­ni­ty. They are referred to by terms like “seabed war­fare” and “under­wa­ter engi­neer­ing”. In layperson’s terms this means laying sensor net­works on the sea floor, and pos­si­bly wire taps on inter­net cables. Losharik and the other ‘deep water sta­tions’, known as AGS, have manip­u­la­tor arms so that they can work on cables on the sea floor. And they can dive to incred­i­ble depths, much deeper than reg­u­lar sub­marines.

Although GUGI has a large sub­ma­rine fleet, larger in fact than many lead­ing Navy’s and undoubt­ed­ly the largest fleet ded­i­cat­ed to spy mis­sions, it is suf­fer­ing from avail­abil­i­ty issues. Several of its sub­marines have been moth­balled in the arctic city of Severodvinsk for many years. Right now, four of the deep diving midget sub­marines are there. These include Losharik, and that is a prob­lem for the Russian Navy.

Losharik, which is for­mal­ly known as AS-21, is the sole Project 10831 sub­ma­rine. She is the most modern, and also the most capa­ble, of the deep diving midget sub­marines. So she car­ried the great­est burden. And the newest of the spe­cial mis­sion host sub­marines, Belgorod, is designed specif­i­cal­ly to carry her.

Belgorod was launched on April 23 2019 and is cur­rent­ly being fitted out in Severdovinsk. She is actu­al­ly just across the river from where Losharik has most recent­ly been seen. Belgorod is slated to be com­mis­sioned into the Russian fleet later this year, although that seems highly opti­mistic. And with­out Losharik avail­able, there will be no mean­ing­ful ‘spy mis­sion’ to test. Launch and recov­ery of Losharik will log­i­cal­ly be a major phase of the test­ing. And Belgorod’s second mis­sion, as a launch plat­form for the Poseidon strate­gic weapon, is not expect­ed until 2027. This likely trans­lates into a delay in Belgorod’s sched­ule.

We do not know how much longer Losharik’s repairs will take. The fact that she is in the water, being moved around Severodvinsk, may mean one of two things. Either there are delays in start­ing a phase of the work and she is wait­ing for a slot, or it is almost fin­ished. You can be rest assured that ana­lysts will be watch­ing, trying to figure out what it all means for the Russian Navy. And your inter­net con­nec­tion.