Reopening Schools Was Just an Afterthought 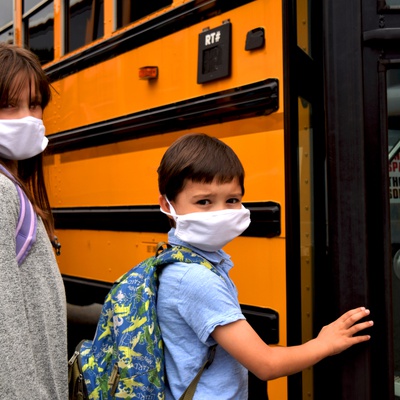 If American society is going to take one major risk in the name of reopening, ideally it should be to send children back to school. This issue is personal for me. I have three kids, one in college and two in a local public high school. It’s now early July, and we still have no idea whether or how they will be returning to classes that, ordinarily, would resume just weeks from now. My children’s summer has been idle. They have no jobs and not much summer programming to keep them busy. I try to convince myself they aren’t missing out on much. Hey, I grew up in the ’80s, I think, and all we did during the summer was hang out at the beach. Most days, I make it to about 10 a.m. before I rouse them.

I’m lucky, at least in comparison with working parents who have younger kids, because my teenagers are mostly coping and don’t need me—or want me—to keep them occupied. Our stresses as a family are merely those of inconvenience, and we still find our current situation unsustainable. Parents who have no control over their own work schedule are far worse off, as are younger children for whom an indefinite absence from the classroom holds many dangers—the mental-health and emotional risks of long-term isolation, the greater likelihood of abuse and neglect going undetected, the internet-access disparities that turn some of the most vulnerable students into virtual dropouts.

In the past week or so, more and more Americans have suddenly remembered that fall comes after summer. Recent headlines have heaped scorn upon the values of a society that seemingly prioritized inessential businesses over schools. “We Have to Focus on Opening Schools, Not Bars,” The New York Times declared. “Close the Bars. Reopen the Schools,” a piece in Vox implored. The hashtag #schoolsbeforebars is trending.

Reopening indoor bars—closed spaces where wearing masks and maintaining social distancing are difficult—was clearly a mistake. Yet approximately zero public officials believe that letting adults drink is more important than educating kids, and any implication that reopening bars and reopening schools are roughly equivalent tasks badly understates the enormous barriers to the latter. From the government’s perspective, the only thing bars need is permission to reopen. Once they get it, owners and employees can go back to work, and the money starts flowing.

Schools do not have a simple on-off switch. To reopen schools will not just take a lot of money. Classroom layouts, buildings, policies, schedules, extracurricular activities, teacher and staff assignments, and even curricula must all be altered to minimize the risk of coronavirus transmission. Stakeholders—including teachers’ unions, scared parents, and the colleges and universities that will someday enroll a portion of the 50 million students in the nation’s public K–12 schools—all have interests, some not easily avoided or ignored by a governor. Assigning a young, healthy high-school math teacher to substitute for a second-grade reading teacher with chronic health conditions—or inviting idle recent college graduates to sign on as teaching assistants—might sound easy on paper; in reality, the regulations meant to ensure that adults in classrooms are appropriately trained and vetted to work with children are also impediments to making rapid personnel moves in a crisis. Without clear direction and substantial financial support from the state or federal agencies, the easiest course for school administrators is to say nothing. According to a survey in mid-June, 94 percent of K–12 superintendents weren’t ready to announce when or how their schools would reopen.

Two things need to happen before students can go back to school: First, Americans and their elected representatives must consciously decide that children’s needs are worth accepting some additional risk. Second, states and communities must commit the money and effort necessary to reinvent education under radically changed circumstances. Even in states where case counts have plunged, doing what’s right for children will require a massive civic mobilization.

The problem isn’t that policy makers—many of them parents too—don’t know what families are going through. It’s that, fundamentally, the way public officials thought about the consequences of this crisis was flawed. Early in the pandemic, authorities viewed the closure of schools as essential to preventing the spread of a deadly new disease. The federal government and the states have no firm plans for restarting school in August and September because they had no such plans in February and March; public officials simply didn’t classify education as a crucial form of infrastructure in need of protection.

The Department of Homeland Security identifies 16 infrastructure sectors as “so vital to the United States that their incapacitation or destruction, would have a debilitating effect on security, national economic security, national public health or safety.” Those sectors include agriculture, communications, electricity, financial services, health care, transportation systems, water, and even dams. The official list guides how local, state and federal homeland-security experts spend their time and resources. For each sector, a major federal agency is in charge of determining the best way to prevent essential functions from harm and support their recovery if necessary. (Water security falls under the Environmental Protection Agency, for example, and financial services under the Department of the Treasury.)

Bars are not on the list of essential sectors. But neither are schools. The lingering uncertainty about whether in-person education will resume isn’t the result of malfeasance, but utter nonfeasance.

Four months of stay-at-home orders have proved that, if schools are unavailable, a city cannot work, a community cannot function, a nation cannot safeguard itself. That the federal government deemed schools a potential health threat to be shut down during a pandemic—but not an essential service—may reflect the American view of education as a state and local matter. More likely, the omission reflects a lack of imagination. In March, few foresaw that the shutdown measures would go on this long, and almost everyone assumed that the U.S. government in particular would spend the time far more wisely.

While Americans closed down their businesses in the name of flattening the curve, President Donald Trump pitted states against one another and drummed up opposition to public-health guidance. Had he done his job properly, the governors who spent March and April trying to outbid one another for masks and ventilators could have devoted more energy to education. Had Trump implored his supporters to wear masks and be patient, case counts might well be dropping across the country. Instead, as many states experience an upswing in cases, plans to remake the education system—contemplating changes of a magnitude that would ordinarily take years to implement—are just now being written.

In my work in security and disaster management, I have advised a number of public and private entities about how to move forward during a pandemic. I am currently part of a consulting team advising the state of Massachusetts, where I live, specifically on its school reentry plans. As my children sleep in day after day, and their memories of their most recent in-person classes grow hazier and hazier, I am desperate for my state to reopen schools and hope it gets the details right. Massachusetts seems to have weathered one of the nation’s worst outbreaks reasonably well; infection rates have declined to the point that—with protocols in place to protect children, teachers, and staff—students might be able to go back to at least some normal classes. The harm they face from staying home is enormous. I would accept additional risk for the good of my three teenagers, and children younger than them would benefit even more from being in school.

The notion that schools can’t open again to students until a vaccine arrives should not be the guiding moral standard. The vaccine may never come, and the many other nations that handled their outbreaks far more successfully than the U.S. can show Americans what to do and what not to do when reopening schools. Americans must learn to manage around the virus, to mitigate its potential for spread. Fall isn’t far off, and school systems nationwide need to make up for lost time. A bar doesn’t need a groundswell of public support to reopen, but schools most certainly do.

This article originally appeared in The Atlantic.