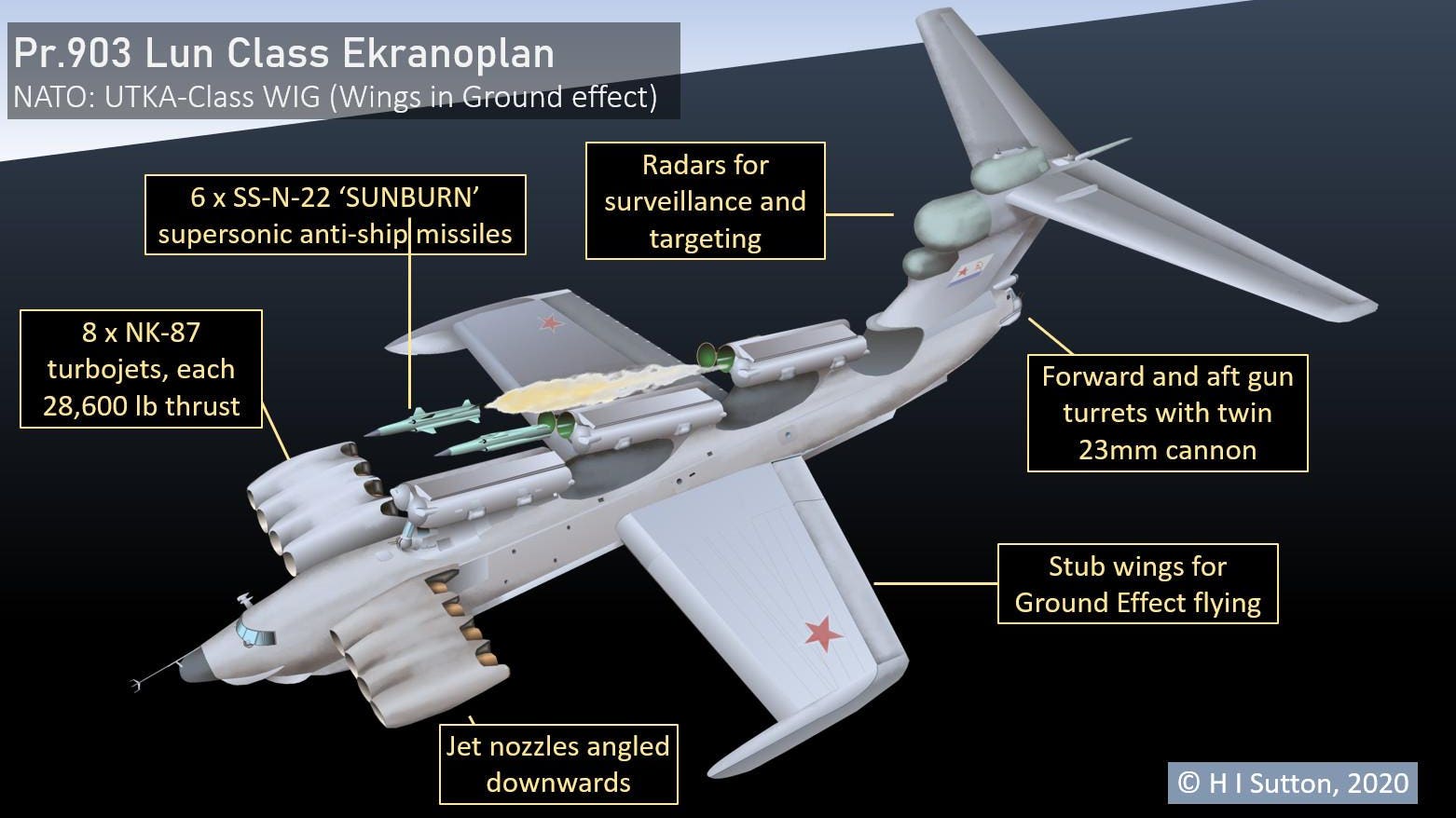 It was a unique naval weapon, the only time anyone has com­bined a sea skim­ming Ground Effect air­craft with car­ri­er-killing super­son­ic mis­siles. Impressively fast and heav­i­ly armed, the gigan­tic Lun Class wings in ground effect (WIG) plane is a clas­sic super weapon of the Cold War. It was one of the most dis­tinc­tive, and least under­stood, naval weapons in Russian Navy’s line up. In the 1980s the Soviet Union planned to built eight to take on U.S. Navy war­ships. But like so many ambi­tious Russian projects it was a victim of the end of the Cold War.

Now the only one com­plet­ed has made its final voyage, from Kaspiysk naval base to a park where it will become a museum. The July 31 jour­ney, towed on barge, took 14 hours. This is in sharp con­trast to the incred­i­ble speeds it was capa­ble of under its own power.

WIG craft, known as Ekranoplans in Russia, use an aero­dy­nam­ic phe­nom­e­non known as ground effect. This is a cush­ion of air which forms between the wing and the ground during low-alti­tude flight. This great­ly reduces drag, allow­ing the WIG to carry heavy loads over long dis­tances, espe­cial­ly over water. The result is like a flying boat which flies very low and very fast.

The Lun class WIG was built in 1987 and entered ser­vice in 1989. NATO were watch­ing close­ly and gave the vessel the report­ing name Utka Class. The project was expen­sive and only the first boat (the Russian Navy con­sid­ered them boats not planes) was com­plet­ed. A second was nearly com­plet­ed.

Its ‘Moskit’ super­son­ic mis­siles, known to NATO as the SS-N-22 Sunburn, made the Lun a for­mi­da­ble adver­sary. It was larger and faster than the Harpoon mis­sile in ser­vice with the U.S. Navy. Flying at just 16 – 32 feet above the sur­face the plane would expect to detect a ship sized target at about 22 miles. For Moskit this would be almost point-blank range, giving the target min­i­mal time to react.

But it was expect­ed, by U.S. Intelligence at least, that sev­er­al would oper­ate togeth­er. One would go ahead, pro­vid­ing final target data to others which would remain behind the NATO warship’s radar hori­zon. The Moskit mis­siles had a range of about 60 miles and could be fired using the for­ward Ekranoplan’s target data. A three-ship for­ma­tion could unleash 18 mis­siles at a target simul­ta­ne­ous­ly, each one clos­ing at 3 times the speed of sound (known as Mach 3).

NATO con­sid­ered the type a coastal defense asset, ful­fill­ing the role sim­i­lar to mis­sile boats. But able to cover a much larger area and react more quick­ly to new threats. In the Russian Navy press release how­ev­er it points to an anti-car­ri­er role. It sug­gests that the Lun could use its high speed and stealth (due to its low alti­tude) to get close enough to launch its mis­siles.

Only Russia ever tried to build such a vehi­cle. There have been recur­ring reports of fin­ish­ing the second Lun air­frame as a search and rescue plat­form. Or that pro­duc­tion will resume, mainly for use mainly in the Arctic. This does­n’t seem likely due to the cost involved.

Many other WIG exist, but they are all pas­sen­ger car­ry­ing or exper­i­men­tal. The only Navy known to use them today is Iran, but these single-seat craft are no com­par­i­son to the Lun.

The Lun will be on dis­play at Patriot park in Derbent on the Caspian Sea. It is the final chap­ter of a unique craft, but it will remain one of the great ‘what if’ ques­tions of Cold War tech­nol­o­gy which never saw ser­vice.