‘No. Don’t Tweet That’: The Most Important Advice Trump Received Was Not to Tweet, Former Chief of Staff John Kelly Says

By ymfhu
Posted March 25, 2020
In Defense, Information
‘No. Don’t Tweet That’: The Most Important Advice Trump Received Was Not to Tweet, Former Chief of Staff John Kelly Says2020-03-252020-03-25https://staging.taktikz.com/wp-content/uploads/2015/07/taktikz-Original.jpgtaktik(z) Staginghttps://staging.taktikz.com/wp-content/uploads/2015/07/taktikz-Original.jpg200px200px Former White House Chief of Staff John Kelly is allow­ing the dis­clo­sure of some of the inner work­ings of the Trump admin­is­tra­tion in an upcom­ing book by ABC chief Washington cor­re­spon­dent Jonathan Karl, includ­ing the “most impor­tant” action he took for President Donald Trump.

According to an Axios report, Karl’s upcom­ing book, “Front Row at the Trump Show,” details how Kelly direct­ed the traf­fic for the White House staff and reg­u­lat­ed the pres­i­den­t’s Twitter feed. Kelly recalled in the book that the most impor­tant piece of advice he gave to Trump was not to tweet.

Trump select­ed Kelly after then-Chief of Staff Reince Priebus was ousted in July 2017. As a former Marine Corps gen­er­al, Kelly was long viewed as a choice to bring order to what had been a chaot­ic West Wing.

Upon his arrival, Kelly dras­ti­cal­ly lim­it­ed the White House staff’s unfet­tered access to Trump, a move that report­ed­ly includ­ed mem­bers of the pres­i­den­t’s own family — his son-in-law and senior advis­er, Jared Kushner, and his daugh­ter and senior advis­er, Ivanka Trump. 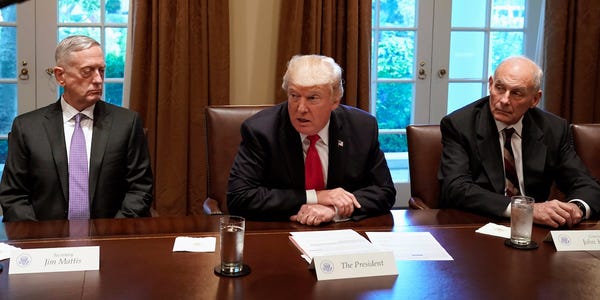 President Donald Trump talks to the media between Defense Secretary James Mattis and White House Chief of Staff John Kelly during a brief­ing with senior mil­i­tary lead­ers at the White House in Washington, D.C., October 5, 2017. Reuters

Karl notes in the book that Kelly “agreed to allow me to quote this and other pre­vi­ous­ly off-the-record remarks he made while he was chief of staff,” a move that other Marine Corps gen­er­als pre­vi­ous­ly on Trump’s staff, includ­ing former Defense Secretary James Mattis, declined to do out of respect for the office of the pres­i­den­cy.

Kelly was uncer­e­mo­ni­ous­ly fired in December 2018, months after his rela­tion­ship with the pres­i­dent report­ed­ly grew sour. Trump went on to dis­par­age Kelly’s tenure after the former gen­er­al pub­licly crit­i­cized the pres­i­den­t’s poli­cies and demeanor.

“When I ter­mi­nat­ed John Kelly, which I could­n’t do fast enough, he knew full well that he was way over his head,” Trump tweet­ed in February. “Being Chief of Staff just wasn’t for him. He came in with a bang, went out with a whim­per, but like so many X’s, he misses the action & just can’t keep his mouth shut.”

Karl’s book is avail­able on March 31.