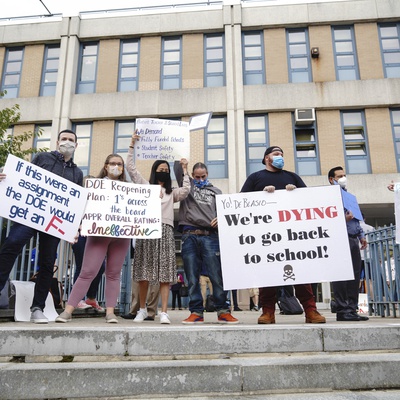 The union rep­re­sent­ing New York City’s school prin­ci­pals is call­ing on Mayor Bill de Blasio to cede con­trol of the edu­ca­tion depart­ment for the dura­tion of the public health crisis, saying they have lost con­fi­dence in his plan to reopen schools. The Council of School Supervisors and Administrators, which rep­re­sents more than 6,400 city school lead­ers, unan­i­mous­ly passed a vote of “no con­fi­dence” against de Blasio and Schools Chancellor Richard Carranzato on Sunday. “Quite simply, we believe the city and [Department of Education] need help from the State Education Department, and we hope that the mayor soon real­izes why this is nec­es­sary,” CSA President Mark Cannizzaro said in a state­ment. Schools lead­ers have com­plained that they do not have enough teach­ers for both remote and in-person learn­ing. The push­back comes as many stu­dents are expect­ed to report back to class­rooms this week, while some will remain at home doing remote learn­ing. The city’s 1.1 mil­lion stu­dents have already start­ed the school year remote­ly and the mayor has twice delayed the start of in-person class­es. New York Gov. Andrew Cuomo respond­ed to the vote Monday, saying offi­cials will mon­i­tor the sit­u­a­tion as schools reopen with test­ing and act accord­ing­ly, but that the state will not take over city schools. For its part, the city Department of Education defend­ed itself, with a spokesper­son saying, “For the past six months, we’ve worked with our labor part­ners to nav­i­gate com­plete­ly unchart­ed waters and accom­plish our shared goal of serv­ing stu­dents this fall.”, [NPR, New York Times, WABC-TV]

COVID-19 SURGE | Almost half of states report­ed a more than 10% increase in coro­n­avirus cases com­pared to the week before, rais­ing health experts’ con­cern about a poten­tial surge of ill­ness­es in the fall and winter. Cases are on the rise in 21 states, most of them in the West, accord­ing to a CNN analy­sis of data from Johns Hopkins University. States that have seen an increase include: Alabama, Alaska, Colorado, Idaho, Maine, Michigan, Minnesota, Montana, Nevada, New Jersey, New Mexico, North Carolina, North Dakota, Oregon, South Carolina, South Dakota, Texas, Utah, Washington, Wisconsin and Wyoming. The University of Washington’s Institute for Health Metrics and Evaluation pre­dicts a “huge surge” in infec­tions expect­ed to take off in October and grow through the end of the year, with the poten­tial to jump from 785 deaths a day to 3,000 daily deaths by December. [CNN]

HURRICANE AFTERMATH | Nonprofits in Louisiana say they are strug­gling to meet the needs of res­i­dents who were dis­placed from their homes by Hurricane Laura. Storm damage assess­ments for homes and busi­ness­es are still pend­ing, but ana­lysts have pro­ject­ed insured dam­ages could cost between $8 bil­lion to $12 bil­lion and unin­sured losses bil­lions more. Yet dona­tions to United Way in the after­math of the storm are only 75% of what the orga­ni­za­tion raised during the same period after Hurricane Rita. Meanwhile, the Red Cross con­tin­ued to pro­vide emer­gency lodg­ing to more than 15,900 people last week. [The Advocate, Red Cross]

LOTS OF EARLY VOTING | Close to 1 mil­lion people have voted early in the 2020 pres­i­den­tial elec­tion, far more than the 9,525 bal­lots cast at this point in the 2016 elec­tion, accord­ing to the U.S. Elections Project. Amid the coro­n­avirus pan­dem­ic, states have changed elec­tion laws to make it easier to request an absen­tee ballot or to vote in-person before Election Day. According to an analy­sis of 25 states where early voting data is avail­able, Virginia leads the way thus far with the most votes cast early — 200,277 people have voted at early voting sites across the state and anoth­er 83,822 people have voted by mail. [U.S. Election Project]

HOUSE PARTY JAIL TIME | A Maryland man who threw two par­ties at his home in March was sen­tenced to a year in jail after he was con­vict­ed of vio­lat­ing Gov. Larry Hogan’s coro­n­avirus order lim­it­ing large gath­er­ings. The second time police were called to Shawn Marshall Myers’ Hughesville home they found more than 50 people gath­ered around a bon­fire. At the time, gath­er­ings of more than 10 people were banned. A judge con­vict­ed Myers of two counts of fail­ure to comply with the governor’s emer­gency order. In addi­tion to jail time, he also received a $5,000 fine and three years pro­ba­tion. “He was given a warn­ing,” Charles County State’s Attorney Tony Covington said. “It’s not like the police just swooped in there and said you’re going to jail.” [WRC-TV, WTTG-TV]