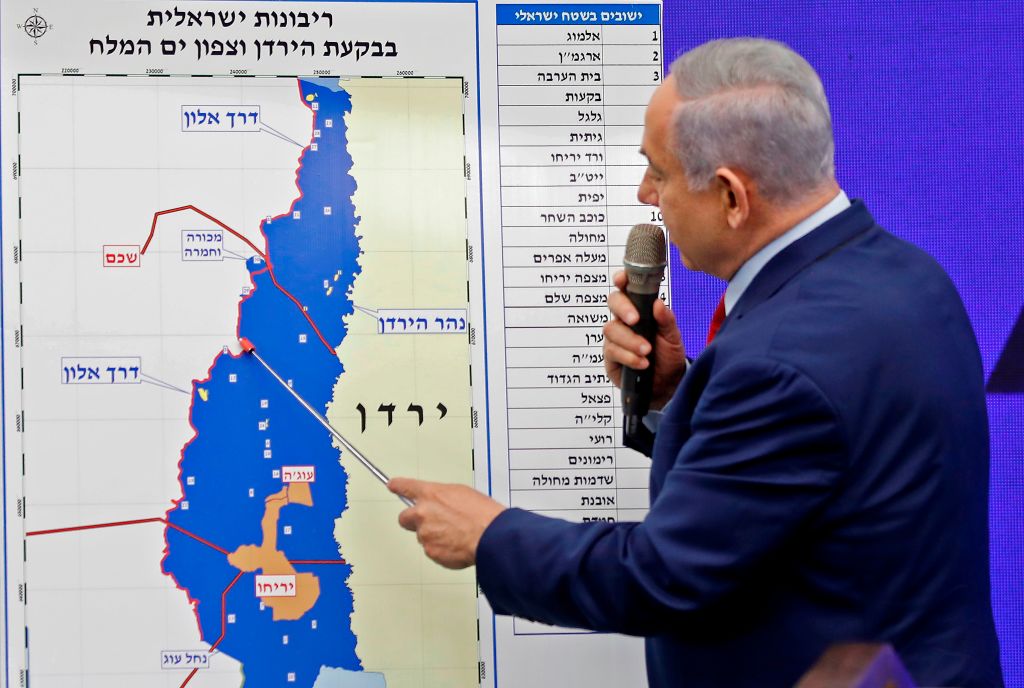 ‘To annex or not to annex’ sums up the dilemma facing the Israeli prime minister. US President Donald Trump’s Middle East ‘peace plan’ has given Benjamin Netanyahu the green light to annex around 30% of the West Bank, including the strategically important Jordan Valley. It came as a boon both for the settlers’ lobby and for Netanyahu personally.

The plan legitimised Israeli settlements in the occupied territories and was a step towards eliminating the two-state option. It was also a timely gift for Netanyahu, who has been fighting for his political life. The plan added to his image among Israelis as being principally responsible for persuading Trump to move the US embassy from Tel Aviv to Jerusalem and endorse the Israeli annexation of the Golan Heights.

If Netanyahu succeeds in annexing even a part of the West Bank to Israel it will consolidate his right-wing base and make it impossible for a challenger to emerge within his Likud party. The publicity around annexation has also helped to divert public attention from the corruption charges for which he is on trial. Finally, annexation will cement his place in history as the person responsible for fulfilling Zionist leader Ze’ev Jabotinsky’s dream of a greater Israel extending across both sides of the Jordan River.

With these considerations in mind, Netanyahu had set 1 July as the date to announce the annexation of at least a portion of the territories assigned to Israel by the Trump plan. He was in a hurry to do so before the US presidential election in November; while Joe Biden is a fervent supporter of Israel, he has expressed opposition to the annexation plan.

However, Netanyahu appears to have run into obstacles that have forced him to delay the announcement. First, he’d counted on Israel’s burgeoning economic and technological relations with the Gulf states to mute their criticism, and he was surprised that their reaction was more severe than he expected.

A unilateral and deliberate act, annexation is the illegal seizure of Palestinian land. It defies the Arab—and indeed the international—consensus on the Palestinian right to self-determination. It will ignite violence and rouse extremists. It will send shockwaves around the region, especially in Jordan, whose stability—often taken for granted—benefits the entire region, particularly Israel.

He went on to declare that Israeli leaders had promoted excited talk about normalisation of relations with the UAE and other Arab states, but Israeli plans for annexation and talk of normalisation were a contradiction.

The Jordanian reaction has been even more severe. It has threatened to abrogate or downgrade its 1994 peace treaty with Israel if the annexation goes ahead. In an interview with Der Spiegel, King Abdullah warned that if Israel annexes settlement blocs, not only could it cause an increase in regional extremism, it could lead to a clash with the kingdom. He pointedly didn’t rule out the possibility that Jordan would annul the peace treaty with Israel. Abdullah is worried that such an action will destabilise his regime by radicalising the Jordanian population, more than half of whom are of Palestinian origin. That could cost him his throne.

International reaction has been equally harsh. ‘We are at a watershed moment’, UN Secretary-General Antonio Guterres told a virtual meeting of the Security Council. He went on to say, ‘If implemented, annexation would constitute a most serious violation of international law, grievously harm the prospect of a two-State solution and undercut the possibilities of a renewal of negotiations. I call on the Israeli Government to abandon its annexation plans.’

British Prime Minister Boris Johnson, a longstanding friend of Israel, has warned that annexation will be contrary to Israel’s long-term interests. In an opinion piece published in a leading Israeli daily, he wrote, ‘I profoundly hope that annexation does not go ahead. If it does, the UK will not recognise any changes to the 1967 lines, except those agreed between both parties.’

French Foreign Minister Jean-Yves Le Drian also warned Netanyahu not to annex any part of the West Bank because it would be in violation of international law and could have unforeseen consequences.

While Netanyahu may ignore international reaction and downplay the Arab opposition as a sop to domestic opinion, he cannot move without explicit US endorsement. That approval has obviously not been forthcoming. The US administration has sent a special envoy to Israel to consult with both Netanyahu and alternate prime minister Benny Gantz.

On 30 June, Netanyahu said he had met with Trump’s envoy Avi Berkowitz and US Ambassador David Friedman, ‘and spoke to them about sovereignty. It’s an issue we’re working on’. He thus effectively postponed any decision on annexation.

Even more important, he knows that he has to carry his coalition partner Gantz with him or face a major political crisis that may lead to the fall of his government. Gantz made clear to Trump’s envoys that 1 July ‘is not a sacred date’. He also declared that decisions unrelated to the coronavirus pandemic must wait.

Faced with his coalition partner’s foot-dragging, American indecision and unexpectedly harsh denunciation from Arab and other international sources, Netanyahu has apparently decided to delay a decision on the annexation issue. However, this doesn’t mean he has given up on the idea that he believes will determine his place in Israeli history.