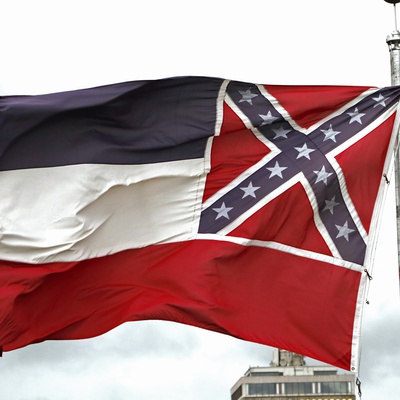 Mississippi lawmakers on Sunday voted to jettison the state flag that for more than 100 years has prominently included a Confederate symbol. A crucial step for lawmakers came on Saturday, when both the House and Senate mounted the two-thirds majorities needed to approve a resolution to allow a bill to change the flag to be filed outside the usual legislative deadlines. Both chambers then considered and passed the bill on Sunday. “For 100 plus years, we have been living under this flag,” said Sen. David Jordan, a Black Democrat from Greenwood. “We watered this land with our tears and made it rich with our bones, so it’s only fair that we have a symbol that represents us and (does) not remind us of what has happened to us.” On Saturday, Gov. Tate Reeves, a Republican, also said he would sign the bill if sent it by the Republican-controlled legislature, although a spokesman on Sunday said he won’t sign it right away. “The argument over the 1894 flag has become as divisive as the flag itself and it’s time to end it. If they send me a bill this weekend, I will sign it,” Reeves tweeted. The Mississippi flag, which currently includes the Confederate battle emblem in the corner, comes down immediately under the legislation, while a commission works to draw up a new flag. Voters would consider the new design in November, which the bill mandates must include the phrase “In God We Trust.” The Mississippi flag, which has included the “battle cross” since 1894, when the state was in the middle of passing Jim Crow laws to restrict the liberty of Black residents, has received renewed attention in the state in recent years. But even a few months ago it seemed unlikely that legislation would move forward this year. That changed with the protests following the police killing of George Floyd in Minneapolis, which have also focused attention on Confederate statues and other racist symbols across the country. The flag, which voters in 2001 rejected changing, still has some support in the state. “We firmly believe that this political correctness, this movement we are sensing out there right now to delegitimize our American institutions and our American history is a movement that’s incredibly dangerous and cannot be appeased,” said Sen. Chris McDaniel, a Republican. Another leading Republican, Rep. Jason White, the speaker pro tempore in the House, noted that there are “good people” who “believe that this flag is a symbol of our Southern pride and heritage. But for most people throughout our nation and the world, they see that flag and think that it stands for hatred and oppression.” [Mississippi Today; Clarion Ledger; Associated Press]

HOUSE POLICE BILL | The U.S. House of Representatives approved the Democrats’ bill to both encourage and require changes at local police departments. Senate Republicans have their own measure, which has not yet come up for a vote. [NPR]

SCHOOL POLICE | The school board of Madison, Wisconsin will vote next week on whether to end their contract with the city’s police department. School Board President Gloria Reyes said the board recognizes “that now is the time to intensify our commitment to dismantling systemic racism by addressing inequities that only serve as mechanisms of division, and this decision is a significant step.” [Madison.com]

EVICTION MORATORIUM | Nevada Gov. Steve Sisolak announced that the state would be gradually lifting its eviction and foreclosure moratorium, allowing these processes to continue on September 1. “It is just as imperative today as it was when I signed the original directive to allow Nevadans to stay home and stay safe as much as possible, while also providing clarity and a timeline in which rental obligations must be met,” Sisolak said. [NBC News 4]

EQUITY AND INCLUSION | Boston Mayor Marty Walsh announced the creation of an “equity and inclusion” cabinet that will work to take down systemic racism within the city’s government. “It will apply an equity lens to every single department and service, ensuring accountability to this lens in all of our city policies and practices,” Walsh said. [MassLive]