By ymfhu
Posted June 30, 2020
In China, UK, Germany, P5
Merkel Ally Says Dealing With Trump Has Been Difficult and Warns of a Breakdown in Germany’s Relationship With the US2020-06-302020-06-30https://staging.taktikz.com/wp-content/uploads/2015/07/taktikz-Original.jpgtaktik(z) GDIhttps://staging.taktikz.com/wp-content/uploads/2015/07/taktikz-Original.jpg200px200px A senior ally of Angela Merkel says Germany is wor­ried that its rela­tion­ship with the US is break­ing down, amid grow­ing ten­sions between the United States and one of its clos­est European allies.

Andreas Michaelis, Germany’s ambas­sador to the UK and a former for­eign min­is­ter, on Monday after­noon said “short­com­ings” had devel­oped in Berlin’s rela­tion­ship with Washington after clash­es between the two cap­i­tals.

Michaelis on Monday told an event hosted by the London-based think tank, the Institute for Government, that an “untidi­ness” had “crept into” the rela­tion­ship between Merkel’s gov­ern­ment and the White House.

“With all the short­com­ings in terms of infor­ma­tion policy, and things being decid­ed with­out con­sul­ta­tion, this untidi­ness that has crept into the rela­tion­ship is some­thing that wor­ries us.

“We’d like to make that extra step for­ward and say [to the US] ‘let’s work, let’s coop­er­ate on the basis of trust and the qual­i­ty of the rela­tion­ship we have enjoyed in the past’.”

Michaelis was respond­ing to a ques­tion from Business Insider about Trump’s deci­sion to with­draw 9,500 troops from Germany later this year. Merkel's government has said it was not informed of the deci­sion before it was announced.

The com­ments came on the eve of the pub­li­ca­tion of a CNN report claim­ing that the president was "near sadistic" in his treatment of Merkel.

“Some of the things he said to Angela Merkel are just unbe­liev­able: he called her ‘stupid,’ and accused her of being in the pocket of the Russians,” one source told CNN.

The report claimed that the details of phone con­ver­sa­tions between Merkel and Trump were so poten­tial­ly dam­ag­ing that steps were taken to limit the number of people privy to them in her gov­ern­ment.

Michaelis, was also crit­i­cal of Trump’s approach to China, describ­ing his hard­line stance on Beijing as being too “simple” and “in the binary code of black and white.”

President Trump has led explic­it calls for an inves­ti­ga­tion into China’s han­dling of the COVID-19 crisis and has blamed Beijing for the global pan­dem­ic. However, the European Union and member states, includ­ing Germany, have taken a more cau­tious approach.

Asked whether there was ten­sion between Germany and the US over their approach­es to China, Michaelis said: “We’ve had hours and hours of most inter­est­ing con­ver­sa­tion with our transat­lantic part­ners on the China ques­tion.

“And there are dif­fer­ences of inter­est, very clear­ly.

“If there is ten­sion in the transat­lantic part­ner­ship in regards to China, it is due to a policy on the US side which is flat foot on the accel­er­a­tor.”

Michaelis added: “We [Germany] feel when it comes to China, you have to be very spe­cif­ic in the area of policy, and that cre­ates a very com­plex net­work. This is, by def­i­n­i­tion, a European way of look­ing at things.

“It’s not black or white. It’s a lot of grey. And we have to be very care­ful.

“I am not saying we are over­look­ing the dan­gers that are implic­it in deal­ing with a part­ner [China] that is not a democ­ra­cy and does not share our values, like the US shares our values.

“But if the US has decid­ed to have a rel­a­tive­ly simple China policy, that exists in the binary code of black and white, that is cer­tain­ly not the China policy that would fit the European inter­est — and that’s why we need to dis­cuss it.”

He warned the White House that Germany would not be bul­lied into adopt­ing a US approach.

“What’s total­ly out of place is us being sud­den­ly urged or com­mand­ed to adopt cer­tain ele­ments of policy that are not decid­ed in Europe, but decid­ed in Washington,” Michaelis said.

Germany’s historic relationship with the US is under strain 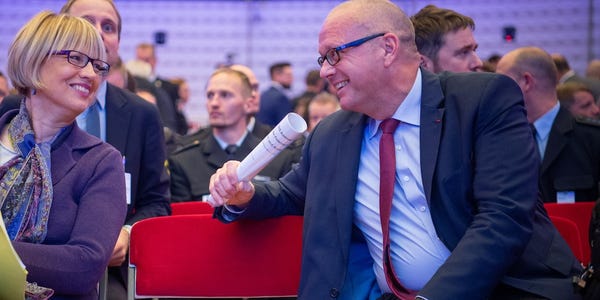 Michaelis’ remarks come amid strain on Merkel’s rela­tion­ship with the Trump admin­is­tra­tion.

Allies of Merkel have react­ed angri­ly to Trump’s deci­sion to with­draw troops from Germany later this year.

Johann Wadephul, a senior figure in Merkel’s Christian Democratic Union party, recently said: “We expect our lead­ing ally to act as a model, with ori­en­ta­tion and bal­ance — not max­i­mum pres­sure.”

EU offi­cials were this month “furi­ous” with the Trump admin­is­tra­tion, Bloomberg reported this month, after the pres­i­dent moved to shut Germany and the rest of the EU out of upcom­ing talks between Serbia and Kosovo.

German Chancellor Merkel has played a lead­ing role in trying to broker rec­on­cil­i­a­tion between the two coun­tries.

However, the EU’s diplo­mat for Balkan nego­ti­a­tions, Miroslav Lajcak, report­ed­ly learned about the US deci­sion to exclude Europe while he was on his way to Kosovo, and was not invit­ed to the meet­ing in Washington later this month.

Three offi­cials involved in the nego­ti­a­tions told Bloomberg that the deci­sion of the Trump admin­is­tra­tion to exclude the EU from the meet­ing ignored years of work by Merkel and others in deesca­lat­ing ten­sions in the region.

Michaelis on Monday stressed that despite recent growth in ten­sions between the two coun­tries, the US remained a key ally of Germany going for­ward.

“But what is easily under­es­ti­mat­ed, is the depen­den­cy which exists in terms of our secu­ri­ty needs, on the US,” he said.

“And by the same token, our will­ing­ness to have this very spe­cial rela­tion­ship.

“The US is our most impor­tant part­ner out­side of the EU, no ques­tion. And that needs to be stressed before you answer [the ques­tion about Germany’s rela­tion­ship with the US] in an honest way.”