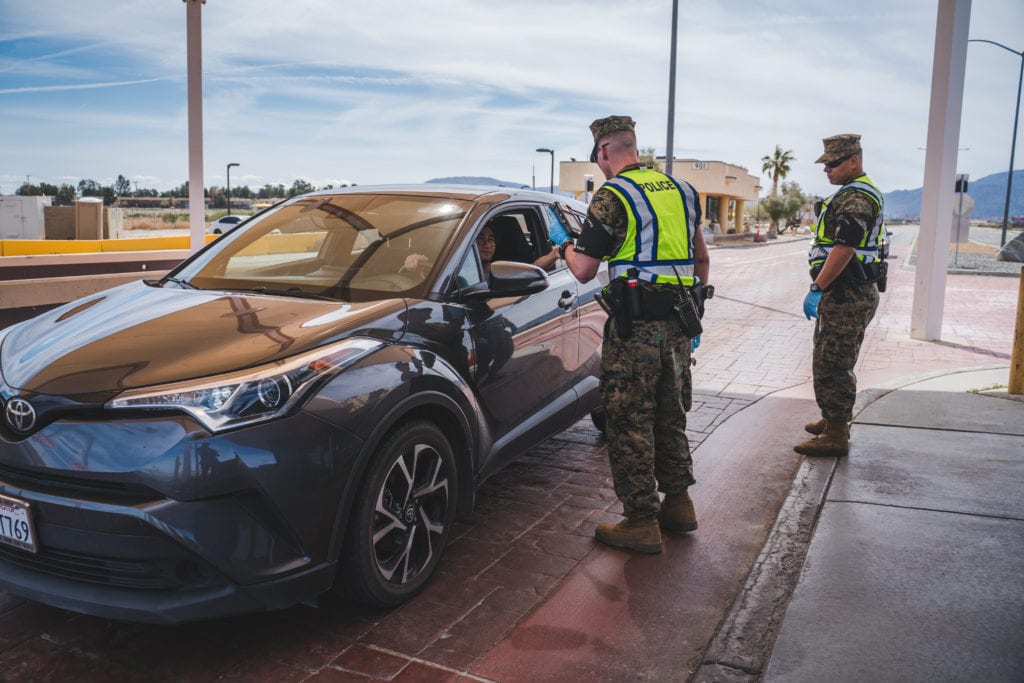 ARLINGTON, Va. — Restrictions imposed by the battle against the coro­n­avirus are pre­sent­ing the U.S. Marine Corps with an array of new chal­lenges — from main­tain­ing groom­ing stan­dards to how, when and where America’s force in readi­ness can train safely in a pan­dem­ic.

In a joint Pentagon press brief­ing on March 26 with Marine Commandant Gen. David Berger, acting Navy Secretary Thomas Modly said the Marines have scaled back train­ing at Marine Corps Air Ground Combat Center, Twentynine Palms and the Mountain Warfare Training Center, both in California. They also have can­celed train­ing with for­eign part­ners and much of the Headquarters Marine Corps staff have been ordered to work from home.

Promotion boards can spread out over sev­er­al rooms and shoot­ers can spread out on the firing line of a pistol range, but “in a live-fire exer­cise you can only do so much to mod­er­ate social dis­tanc­ing,” Berger said.

“The Marine Corps is unique,” the com­man­dant explained. “We are man­dat­ed by law to be the nation’s most ready force.” He has given local com­man­ders leeway to oper­ate as they see best depend­ing on the local sit­u­a­tion rather than issu­ing a blan­ket, Corps-wide list of restric­tions. When it comes to train­ing, Berger said, “com­man­ders are taking mea­sures that make sense but also making sure their units are trained and ready to go.”

“This is a unique time. We’re trying to find unique answers. It’s not going to be the same as sit­ting in the bleach­ers at grad­u­a­tion. There’s no way to repli­cate that.”

Basic train­ing grad­u­a­tions have been closed to all out­siders, includ­ing family, to pre­vent spread­ing dis­ease. “It’s dri­ving us to be pretty cre­ative,” Berger said. The cer­e­monies are now tele­vised and dig­i­tal­ly record­ed for each new Marine.

“This is a unique time. We’re trying to find unique answers,” said Sgt. Major of the Marine Corps Troy Black, but he con­ced­ed “it’s not going to be the same as sit­ting in the bleach­ers at grad­u­a­tion. There’s no way to repli­cate that.”

Although lead­ers have halted face-to-face meet­ings between recruiters and enlist­ment prospects, the Marines have not stopped train­ing or bring­ing new recruits to boot camps in California and South Carolina. Both facil­i­ties have begun screen­ing incom­ing recruits before they depart from pro­cess­ing sta­tions and when they arrive at the recruit depot. Any show­ing symp­toms are iso­lat­ed. At least two have tested pos­i­tive for the virus, but no drill instruc­tors have, Modly said.

“Everybody’s still get­ting their head shaved as long as the bar­bers come to work,” Berger said, “but there will come that time when it gets worse and worse and worse, where bar­bers won’t come to work. In that case we’ll have to make a deci­sion: ‘Do Marines cut Marines’ hair?’ Commanders at both of our recruit depots have thought their way through it.”

Berger noted head­quar­ters hasn’t said groom­ing stan­dards are relaxed for a given period. “What we have said is com­man­ders have the lat­i­tude to make adjust­ments based on what’s avail­able at your loca­tion.”