By taktik(z) GDI
Posted November 29, 2020
In Uncategorized
Let’s Talk About All the B-70 Valkyrie Variants Envisioned for the Mach 3 Superbomber Prior to Cancellation2020-11-292020-11-29https://staging.taktikz.com/wp-content/uploads/2015/07/taktikz-Original.jpgtaktik(z) GDIhttps://staging.taktikz.com/wp-content/uploads/2015/07/taktikz-Original.jpg200px200px 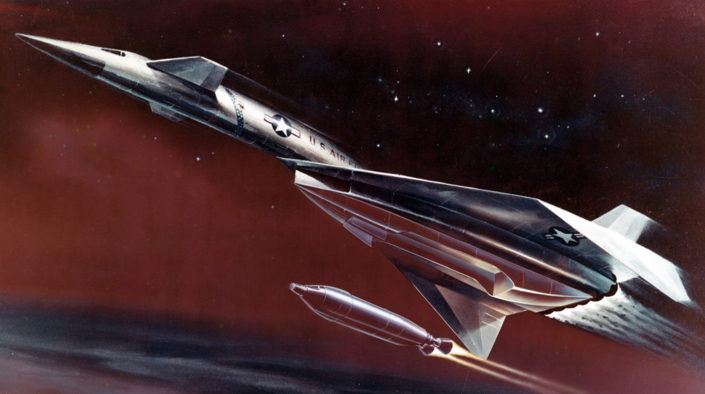 Many fascinating variants were proposed while trying to save the XB-70 Valkyrie program.

We have often written about the XB-70 Valkyrie, With a cruise speed of Mach 3 and operational altitude of 70,000 feet, that should have granted the bomber a near-invulnerability against Soviet air defenses and fighters, the Valkyrie was designed to be the ultimate strategic bomber of the U.S. Air Force. On November 23, 2020, the Air Force Material Command’s (AFMC) History Office released a document called “NAA B-70 Valkyrie Variants: A Future That Never Was…”, describing many variants, some of which previously unknown, that were conceptualized during the development of the bomber.

The first concept to be mentioned is the Alert Pod developed by Beech Aircraft to provide the bomber with a standalone ground power systems during alert launches or deployment to austere bases. According to the book “Valkyrie: The North American XB-70” by Graham Simmons, the Strategic Air Command (SAC) required the Valkyrie to be started up in just three minutes, but this could be done only with external power warming up the systems to get them at the correct operating temperatures while in ground-alert.

The decision was made to create a streamlined pod to carry all hydraulic, electrical a pneumatic power while the aircraft was on ground alert or in maintenance, both at home or on deployment. The pod, however, limited the XB-70 to subsonic flight as it was attached under the fuselage behind the weapons bay, but it eliminated the need to send cargo aircraft ahead of the deployment to transport the support equipment. Here is a description provided in the book by Simmons:

“The pod contained two small gas turbine engines driving six hydraulic pumps (one for each J93) and two generators. The hydraulics allowed each of the accessory drives on the B-70 to be powered in order to start the J93s. The pod could also cool and/or heat the B-70 crew compartment and equipment bays as needed. An area in the rear of the pod allowed the ground crew to store tools and minor parts, while a large JP-6 fuel tank at the front was sufficient for nine hours of unrefueled operation of the turbines. The pod could be controlled locally by the ground crew, or from the crew compartment at the copilot’s station.”

Another concept was to use the B-70 as a Recoverable Booster Space System (RBSS), mainly as a cost reduction, as booster rockets used at the time could only be used one time (unlike today’s Space X Falcon 9). This proposal is considered to be the alternative use that received the most attention from military and civilian contractor engineers. Depending on the specific mission, the B-70 could have carried a variety of rockets or experimental aircraft. For instance, the X-20 Dyna-Soar, a 10,000-pound manned boost-glider designed to fly in near orbital space and return, could be carried internally in the weapons bay with only the additional 40,000-pound boosters requiring a large belly fairing and was tested on a model in the wind tunnel but abandoned when the Dyna-Soar program was cancelled.

Another test aircraft was Martin SV-5 lifting body suborbital test vehicle, which required only forward and aft fairings instead of a full enclosure. Some of the proposal even went on to envision a launch of the NASA’s Gemini manned missions from the B-70! Regarding the rockets, the Lockheed RM-81 Agena, an upper stage booster and satellite carrier, was one of the candidates to be used in conjunction with the B-70, in a concept similar in many aspects to Virgin Orbit’s LauncherOne rocket.

Talking about similarities, another concept saw a configuration similar to the drone carrying SR-71 of the M-21/D-21 combo, and in fact it was called M-70 (M from Mothership). This concept was intended to carry the X-15 delta-winged variant that was proposed before the program was terminated after the crash of the third X-15.

Some of the proposals were more oriented to the offensive use, like the air-launched LGM30 Minuteman II ICBM transported in a bolt-on fairing under the Valkyrie’s fuselage, saw as a complement of the ground-based ICBMs. The General Purpose Missile concept, which could be described as a modular cruise missile with different warheads for different targets, could be attached not only under the wings and fuselage, but also on the canards and tail planes. A more conventional solution was the one envisioned for the GAM-87 Skybolt missiles, carried on external hard points under the wings.

A less fancy proposal was reconnaissance/strike adaptation of the bomber, called RSB-70A, which added cameras for post-strike Battle Damage Assessment. This variant was reportedly chosen for the third Valkyrie prototype, but it was never completed. An interesting fact is that this proposal also incorporated a rotary bomb rack which anticipated the Conventional Rotary Launcher used today by Global Strike Command on its bombers.

Obviously, there were also proposals for supersonic cargo conversions. The cargo variant went as far as appearing in an Air Force report where the aircraft was depicted as C-70 and showed the markings of the Military Air Transport Service. North American even added temporary ‘windows’ to XB-70 A/V-1 during a maintenance layover in Palmdale. The passenger cargo variant could accommodate 80 passengers seated in an offset arrangement in standard configuration, while the high density configuration used smaller seats with reduced spacing to accommodate up to 107 passengers. A MEDEVAC variant could be configured with 48 litters, nurses’ station and 34 seats.

The pure cargo variant required more modifications as a modified upper aft fuselage, a wider main cargo area, a lower cargo door and the addition of seats at the cost of a reduced fuel load. According to the engineers, the C-70 could transport 20 5’x7’ pallets (KC-135 standard) or 14 7’x10’ pallets (C-133 standard), more than the cargos used at the time by the Air Mobility Command. The problems, however, originated when the engineers tried to design a swinging nose similar to a Lockheed C-5 Galaxy or Super Guppy or access doors in the bottom and sides of the aircraft to load the pallets. The use of a detachable pod appeared to be the most logical solution.

One of the most bizarre was the tanker variant, which eliminated the need for high-speed fighters and bombers to slow down during in-flight refueling. However, while the already dangerous maneuver was made even more dangerous by the supersonic speeds, the big problem was caused by the shock waves from each aircraft in such close proximity. Some photos show testing of this proposal in the wind tunnel, which were to be integrated with flight simulator testing before moving to actual flight tests with a ‘dry hookup’ between the XB-70 and another supersonic aircraft simulating a tanker.

More “tactical” proposals envisioned the use of a retractable parasail to give aircraft a Short Take-Off and Landing (STOL) capability, which was proposed also for the F-100 Super Sabre, and a terrain following radar for low-level missions to evade the new threats of modern surface-to-air missiles.

Shortly before the Valkyrie program was cancelled, the NASA-funded Supersonic Transport (SST) considered a modified XB-70 as a quick and logical solution to having an operational supersonic passenger transport aircraft in the shortest amount of time. North American proposed to build two modified XB-70s especially for the SST program, with one acting as flying testbed for the new engines. The two aircraft could have been ready before any other country’s SST, according to the company.

As wrote by NASA’s Dryden Flight Research Center, “The XB-70 Valkyrie seemed to be a perfect testbed for SST research. It was the same size as the projected SST designs, and used similar structural materials, such as brazed stainless-steel honeycomb and titanium. Thus, the XB-70A’s role changed from a manned bomber prototype to one of the most remarkable research aircraft ever flown.” The plans however did not work out, as the second XB-70 prototype, the one selected for these tests, crashed before beginning SST testing with NASA pilots. About 25 flights were then performed with the remaining prototype, before research continued with the SR-71.

H/T Steve Trimble for the heads-up!