Let’s Have a Close Look at “Sashambre” the Rare, Heavily Modified B707 Operated by MIT Lincoln Labs for USAF 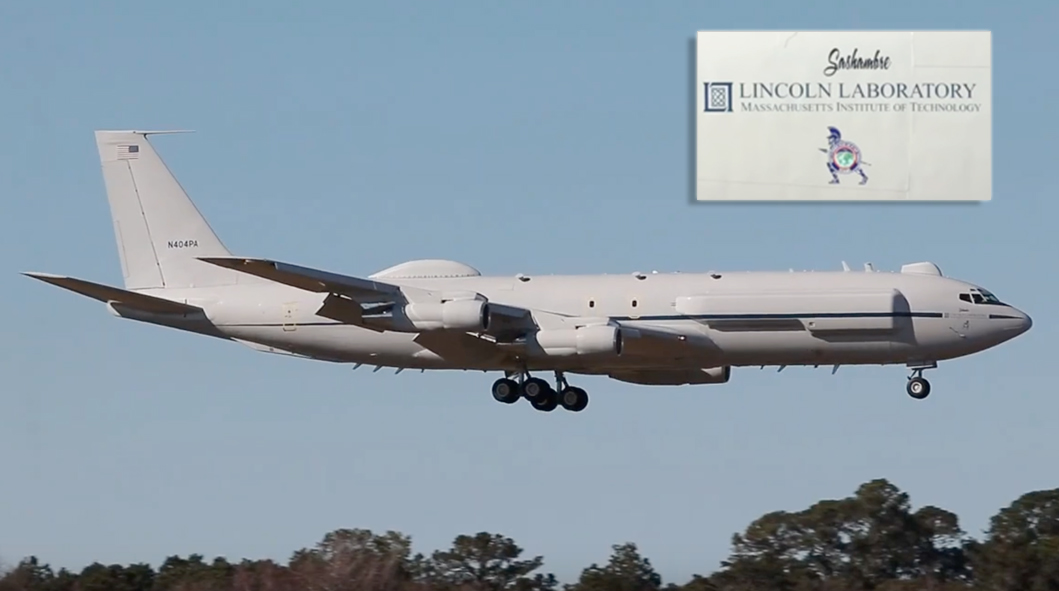 The rare Boeing 707-321B carrying civil registration N404PA, recently renamed “Sashambre” (previously, “Hannah” and “Paul Revere”), is an experimental aircraft owned by the Air Force Systems Command and operated by a joint venture between the Air Force’s 350th Electronic Systems Wing and M.I.T.’s Lincoln Labs. It flew with Pan Am for many years since 1965 before being purchased by the Air Force. Based at Hanscom Air Force Base, Bedford, Massachusetts, “Sashambre” is one of the seven aircraft aircraft that research teams at the Massachusetts Institute of Technology Lincoln Labs Flight Test Facility’s staff can employ to test their prototype airborne systems: in fact, MIT researchers routinely schedule flight time with aircraft that range from the light C-152 to the heavy B707 “to evaluate new antennas, imagers for air surveillance, aircraft collision-avoidance tools, and long-range RF and laser communication systems,” as well as for for data collection missions.

Under the radio callsign “Research 4 Papa Alpha”, the B707 is used for testing airborne battle management, command, control and communication technology and concepts. The airframe has constantly been modified to accommodate new on-board sensors and equipment so much so the shape of the of the 55-year old Boeing 707, with a bunch of “bulks” and “humps” is pretty unique, and interesting.

On Jan. 8, 2020, our reader Misael Oscar had the opportunity to film the aircraft landing at Brunswick, Georgia. Interestingly, Brunswick Air Guard Station is the homebase of the 224th Joint Communications Support Squadron, which provides deployable tactical communications for Joint and Special Operations Task Force Headquarters. “It operates in environments without a reliable terrestrial network, and is often the first to deploy in order to establish communications networks to enhance command and control between units, services, or coalition forces.” The presence of the experimental aircraft there was most probably linked to some test involving the 224th JCSS.

Here’s another video, that provides an interesting close up view of “Sashambre” on the ground at its homebase. It was filmed in January 2020 too.

The following video, published by the MIT Lincoln Labs in 2019, provides a glimpse of the interiors of “Sashambre”:

Here’s what we reported in a previous article on this aircraft:

Back in 2004, a rare U.S. Air Force release on the somehow mysterious Boeing 707 provided some detail about its mission ahead of the participation to JFEX 04.

“Paul Revere […] is the name given to a task force of Air Force, Department of Defense workers and government contractors flying in a contracted government Boeing 707, allowing warfighters to experiment with and test the latest communication technology.

Task Force Paul Revere, an airborne battle management command, control and communications application, helps makes testing machine-to-machine capabilities and global communication experiments possible by sending and receiving data between other airborne and space sensors and the Combined Air and Space Operations Center. This capability could allow United States and coalition warfighters from all services to simultaneously communicate from around the globe.

Currently, aircraft such as the Rivet Joint, Joint Surveillance Target Attack Radar System, U-2 or Airborne Warning and Control System take in information that is saved on disks, analyzed and manually sent to warfighters and planners. Today’s output bandwidth from these aircraft is limited. Task Force Paul Revere experiments with the capability of taking in information from ground, space and air assets and simultaneously and instantly sending the information back out on a global network that includes the CAOC. ”

During JEFX, Task Force Paul Revere is connecting information to Washington and routing it back through the base here.

“In fact, it was suggested Task Force Paul Revere look at AWACS and JSTARS top issues and work them,” Colonel Painter said.

The Boeing 707 being used, formerly a commercial airliner, was pulled out of the aircraft bone yard in the 1980s and turned into a flying laboratory in 2001 by workers at the Massachusetts Institute of Technology Lincoln Laboratory. […]

Though the plane is maintained and flown by lab workers, the aircraft and everything on it belongs to the U.S. government.

“It’s part of a contract we have,” said Dr. Joe Chapa, associate group leader at the lab. “Everything bought or developed for this aircraft belongs to the government. Our main mission is to be a learning organization and then transition the lessons learned to the government.”

The Paul Revere is just one application of the aircraft. Many initiatives are being, and have been, tested aboard the 707 with the help of Task Force Paul Revere.

“We like to think of this flying laboratory as a Mr. Potato Head,” Dr. Chapa said. “We can put a different nose or a different eye on.”

Task Force Paul Revere is a team made up of electronic specialists from the Electronic System Center at Hanscom Air Force Base, Mass., aircraft maintainers and operators from MIT’s Lincoln Lab, and operations experts from the Air Force Command and Control ISR Center, Air Combat Command and Air Force Space Command.”

Since then the problem has been partly solved (using solutions like the BACN platform) and the aircraft has been involved in other tests.

For instance, according to the MIT website, in the Summer of 2008, the N404PA carried out secure extremely high frequency (EHF) satellite communications tests whereas in June 2009, the flying laboratory was involved in demonstrating next-generation antenna for airborne communication with Milstar.

Noteworthy, N404PA can be regularly tracked online during its test flights out of Hanscom AFB.

Every now and again some interesting things fly by. #avgeek #hannah #N404PAhttps://t.co/a2SsVfiOBQ pic.twitter.com/gTr0nwfkEH

HANNAH – out from Hanscom AFB. Racetracks at 26,000ft over Maine

Not only is N404PA unique for its modifications: reportedly, “Sashambre” is also one of the last two civil-registered B707s still flying in the world.