Kongsberg Contract With Raytheon for US Navy Strike Missiles

Kongsberg Defence and Aerospace has signed a con­tract with Raytheon Missile Systems to deliv­er Naval Strike Missiles under a con­tract worth $21.36 mil­lion (203 mil­lion NOK) , the com­pa­ny said. The mis­siles are for the United States Navy’s Over-The-Horizon Weapon System (OTH WS) pro­gramme of which Raytheon is the prime con­trac­tor.

According to Raytheon, the mis­sile also is suited for land attack mis­sions because it can climb and descend with the ter­rain. It was suc­cess­ful­ly tested in a land-based mobile launch­er con­fig­u­ra­tion in 2018 as part of a multi­na­tion mil­i­tary exer­cise. In 2019, it was report­ed that the US Marine Corps inte­grat­ed a land-based Naval Strike Missile for its future force struc­ture and oper­a­tions thus shar­ing costs and inter­op­er­abil­i­ty with the Navy.

The Naval Strike Missile, which is in ser­vice with the Royal Norwegian Navy onboard it Skjold class patrol corvettes and Fridtjof Nansen-class stealth frigates, was first launched suc­cess­ful­ly  on June 5,  2013. A mobile, land-based NSM is deployed with Poland’s coastal defence forces.

Malaysia on 2015 announced that the Naval Strike Missile had won the con­tract to meet the anti-ship mis­sile require­ment for its Maharaja Lela class lit­toral combat ship, an enlarged Gowind stealth corvette design by Naval Group. In February 2017, the Norwegian gov­ern­ment announced that the German Navy will pro­cure “a sig­nif­i­cant amount” of Naval Strike Missiles.

The mis­sile was first fired in the Asia-Pacific region in September 2014 when it was suc­cess­ful­ly tested aboard the lit­toral combat ship USS Coronado (LCS‑4).

The latest firing was  last year when it was launched from the USS Gabrielle Giffords (LCS 10) during Pacific Griffin, an exer­cise con­duct­ed with the Republic of Singapore Navy near Guam from Sept 27 through Oct 10.

The OTH-WS pro­gramme is a long-range, sur­face-to-sur­face war­fare system intend­ed to offen­sive­ly engage mar­itime tar­gets both inside and beyond the radar hori­zon. The system con­sists of an oper­a­tor inter­face con­sole, Naval Strike Missile, and the Missile Launching System. The OTH-WS is intend­ed to be a stand-alone system requir­ing min­i­mal inte­gra­tion into the ship’s plat­form.

The Navy select­ed the Naval Strike Missile in 2018, with Raytheon as the con­trac­tor for its over-the-hori­zon weapon for its lit­toral combat ships and future frigates.

In 2019, the Navy con­duct­ed a struc­tur­al test firing of the OTH-WS to assess the integri­ty and safety of the weapon system instal­la­tion on the launch plat­form. The test showed there were no prob­lems regard­ing inte­gra­tion of the mis­sile launch­ing system with the plat­form. 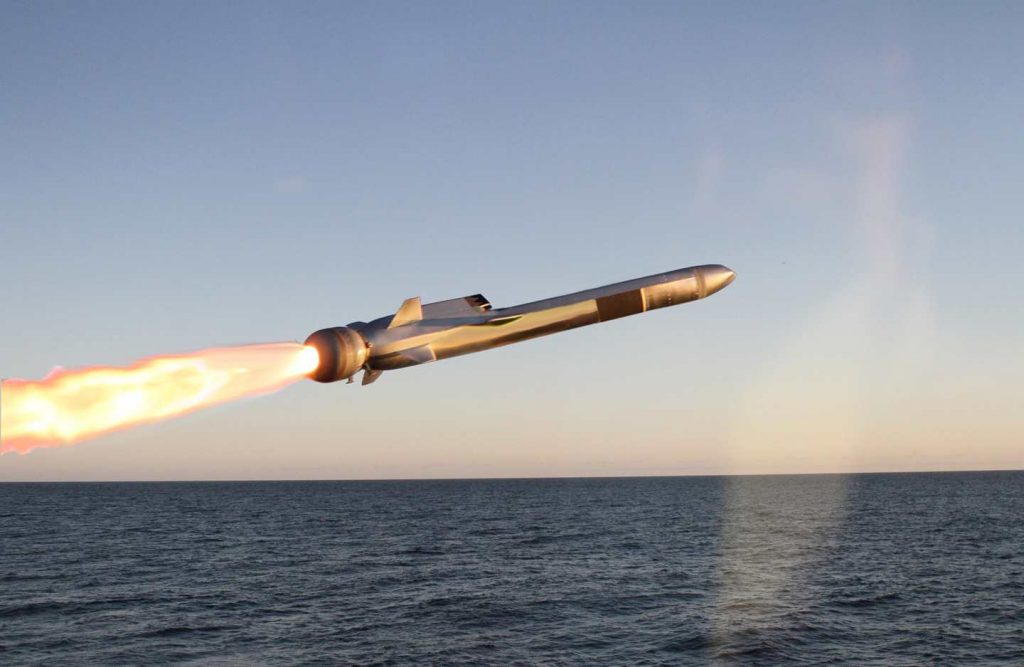