Israel’s Prime Minister Wants to Annex Parts of the West Bank, a Controversial Scheme Encouraged by Trump but Hated by Everyone Else. Here’s What His Plan Is.

By taktik(z) GDI
Posted July 6, 2020
In GDI, Egypt, Israel
Israel’s Prime Minister Wants to Annex Parts of the West Bank, a Controversial Scheme Encouraged by Trump but Hated by Everyone Else. Here’s What His Plan Is.2020-07-062020-07-06https://staging.taktikz.com/wp-content/uploads/2015/07/taktikz-Original.jpgtaktik(z) GDIhttps://staging.taktikz.com/wp-content/uploads/2015/07/taktikz-Original.jpg200px200px Israeli Prime Minister Benjamin Netanyahu has proposed annexing a significant portion of the West Bank, a disputed landlocked territory both Israelis and Palestinians assert claims to.

Netanyahu — who has just begun his fifth term as Israel’s Prime Minister — previously pledged to move forward with plans to annex Israeli settlements in the West Bank, setting July 1 as a tentative deadline to begin the process.

In recent discussions, he has floated the idea of annexing 30% of the West Bank, according to Axios, along with other options that included “a more symbolic annexation of a small amount of land.”

Defense Minister Benny Gantz and Foreign Minister Gabi Ashkenazi told Netanyahu that they oppose the annexation of any areas that house Palestinian residents, the outlet reported. 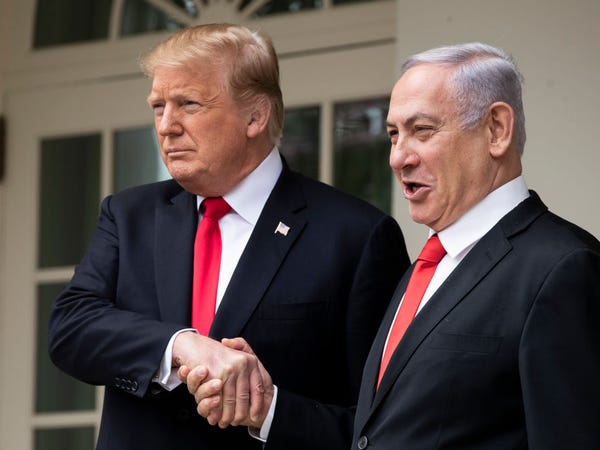 President Donald Trump and Prime Minister of Israel Benjamin Netanyahu shake hands while walking through the colonnade prior to an Oval Office meeting at the White House March 25, 2019 in Washington, DC. Drew Angerer/Getty Images

But Netanyahu’s push to annex territory in the West Bank experienced a delay on Wednesday, as the day went without a formal announcement.

According to The New York Times, Netanyahu is now hoping to have the Trump administration’s approval before going ahead with plans in order to stave off criticism from international observers, many of whom believe that the acquisition of the disputed territory by Israel would violate international law.

According to Reuters, President Donald Trump’s aides, including son-in-law Jared Kushner, have been discussing the annexation plans and whether or not to greenlight the idea. However, no decision has been made yet.

Netanyahu’s calls for annexation align with the Trump administration’s Middle East peace plan that was unveiled in January.

The peace plan does not call for uprooting Palestinians or Israelis in the West Bank from their homes; instead, it would recognize a majority of Israeli settlements in the West Bank as part of Israel, and would give a future Palestinian state land near the Gaza Strip — comprised of mostly desert — to compensate for the land loss.

On Tuesday, Netanyahu said he would continue working on the annexation plans “in the coming days.”

What is the West Bank? 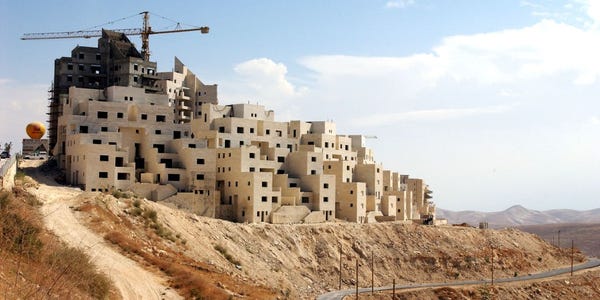 New houses under construction in 2003 in the Jewish settlement of Ma’ale Adumim, located in the West Bank. Marco Di Lauro/Getty Images

The West Bank is a territory west of the Jordan River that was occupied by Israel in 1967 after the Six-Day War.

During a pair of agreements referred to as the Oslo Accords, which were signed in the 1990s, Israel and the Palestinian leadership agreed to divide up the land in the West Bank in pursuit of peace. 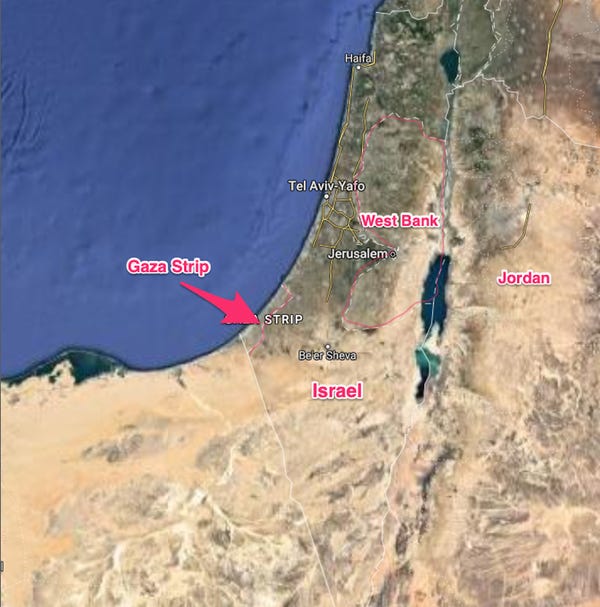 A map of Israel, the West Bank, and the Gaza Strip. Business Insider/Google Maps

Israel believes the West Bank is part of the biblical Kingdom of Israel, and says there has always been a Jewish presence in the territory.

It has continued to build new settlements in recent years.

Palestinians have also held a historical presence in the West Bank, and expressed a desire for the land to be part of a future Palestinian state.

Tens of thousands of Palestinians were displaced from their homes in West Bank cities, including Tulkarem and Qalqilya, when Israel occupied the land in 1967.

International observers say Israeli settlements in the West Bank violate the Fourth Geneva Convention, which prohibits the transfer of a population into a land occupied as a result of armed conflict.

Israel disputes this. The US changed its position in 2019, saying that Israeli settlements were “not inconsistent with international law.” 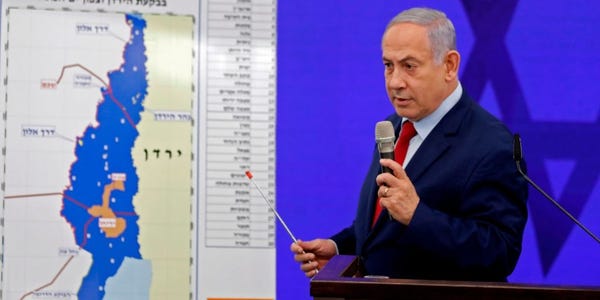 Netanyahu next to a map of the Jordan Valley in Ramat Gan, near Tel Aviv, on September 10, 2019. MENAHEM KAHANA/AFP via Getty Images

Rights groups have criticized Netanyahu’s plans, saying they would derail any chance at peace between Israelis and Palestinians.

Palestinian Authority President Mahmoud Abbas said in May that he would end “all agreements” with Israel and the US over the annexation plans.

Palestinian Prime Minister Mohammad Shtayyeh said in June that Palestinians will declare statehood over all of the West Bank and Gaza if Netanyahu goes ahead with annexation plans.

Meanwhile, some Israeli settlers — a diverse group of both secular and religious Jews — have expressed both support and opposition to Netanyahu’s controversial plan.

“The annexation of occupied territory is a serious violation of the Charter of the United Nations and the Geneva Conventions,” 47 independent experts appointed by the UN Human Rights Council said in a statement.

The statement said that Israel’s 53-year occupation of Palestinian land “is the source of profound human rights violations” and has led to the “denial of the right of Palestinian self-determination.”

A senior United Arab Emirates ambassador also wrote a rare op-ed in a major Hebrew-language newspaper, Yedioth Ahronoth, earlier this month warning against plans to unilaterally annex parts of the West Bank. It was the first time a Gulf diplomat had written in an Israeli newspaper.

“It will ignite violence and rouse extremists,” wrote Yousef Al-Otaiba, the UAE’s ambassador to the US.

In an op-ed in the same Israeli newspaper last Wednesday, UK Prime Minister Boris Johnson said an Israeli annexation in the West Bank “would represent a violation of international law.”

“As a life-long friend, admirer and supporter of Israel, I am fearful that these proposals will fail in their objective of securing Israel’s borders and will be contrary to Israel’s own long-term interests,” Johnson wrote.

Other Israeli allies, including Germany, France, and Australia, also warned against the move.