By ymfhu
Posted July 7, 2020
In Intelligence, Russia
Inside the Special Relationship Between Putin and the Man Responsible for a String of Assassinations in Europe2020-07-072020-07-07https://staging.taktikz.com/wp-content/uploads/2015/07/taktikz-Original.jpgtaktik(z) GDI (Government Defense Infrastructure)https://staging.taktikz.com/wp-content/uploads/2015/07/taktikz-Original.jpg200px200px 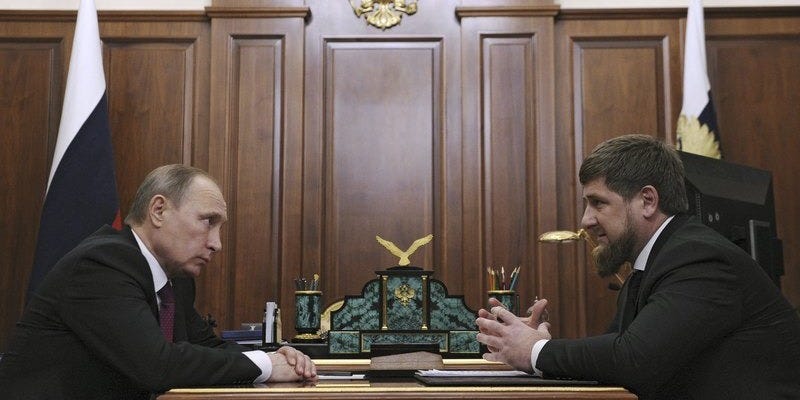 In 2012, Russian diplo­mats approached German law enforce­ment with a list of 19 Chechens wanted by Russian author­i­ties for a vari­ety of crimes relat­ed to Chechen sep­a­ratist move­ments and ter­ror­ism. Russia alleged they had been grant­ed, or were being con­sid­ered for, asylum in the West despite having crim­i­nal back­grounds forged amid the vio­lence that has wracked the remote province.

The request for assis­tance by the Russians was reject­ed, according to the investigative website Bellingcat in a joint project with the German magazine Der Spiegel.

In the eight years since, five of the people on the list have been mur­dered.

They include Zelimkhan Khangoshvili, an ethnic Chechen from Georgia, who was shot to death in broad day­light while walk­ing through a cen­tral Berlin park last August.

Late Saturday, Mamikhan Umarov was gunned down out­side a shop­ping mall in Vienna, Austria. He was an out­spo­ken oppo­nent of the pro-Moscow Chechen regime of Ramzan Kadyrov. After a police chase that employed a heli­copter, the alleged shoot­er, a Russian nation­al believed to be of Chechen dis­sent, was arrest­ed.

In the after­math of the two Russian-Chechen wars of the 1990s, and the splin­ter­ing of the Chechen inde­pen­dence move­ment, Russia installed Kadyrov, a pro-Moscow strong­man, to keep a lid on the region. Fifteen years of vio­lence and assas­si­na­tions fol­lowed.

Now the killings are spilling into Europe. Kadyrov does­n’t seem to care what European law enforce­ment agen­cies think about it. And Putin seems unflus­tered that Kadyrov is killing who­ev­er he wants.

A French police offi­cial work­ing on the case of Imran Aliev, an anti-Kadyrov blogger who had been living under police protection in Belgium before being stabbed to death in a hotel room in Lille, France, last February, said the prob­lem has expand­ed from Eastern Europe and Turkey, where there are large polit­i­cal active dias­po­ras, to Western Europe.
The offi­cial, who does not have per­mis­sion to speak openly to the media, cites at least seven attacks in Istanbul since 2004. There have been anoth­er dozen in Ukraine. The source says they are “typ­i­cal, these are the front lines of their con­flict.”

“What is becom­ing clear is that the rules have changed,” the offi­cial said. “Kadyrov is sending people with hammers and knives after people with police protection in Western European countries. Does he care if we know it is him? No.”

Why does Putin allow Kadyrov to kill whomever he wants?

In con­ver­sa­tions with a dozen Russian experts — rang­ing from intel­li­gence offi­cers to law enforce­ment to think tanks — people tend to cite a ver­sion of the Thomas Becket story, in which King Henry II asked “Will no one rid me of this tur­bu­lent priest?”

Kadyrov serves a double func­tion for Putin in this under­stand­ing. The mur­ders of high-pro­file jour­nal­ists and polit­i­cal oppo­nents in Moscow, such as Boris Nemtsov in 2015 and Anna Politkovskaya in 2006, are com­mon­ly blamed on Kadyrov, as opposed to Putin. Thus, the pres­i­dent of Russia gets to enjoy know­ing his oppo­nents might end up being mur­dered with­out direct involve­ment him­self.

“Something like Nemtsov, it really does­n’t seem like Putin knew that it was being planned. Maybe he cared a little because there was sig­nalling of some dis­plea­sure. But that’s for show. He does­n’t mind if his ene­mies are wor­ried some Chechen guy might shoot them,” accord­ing to a Central European counter-intel­li­gence offi­cial who fre­quent­ly mon­i­tors Russian oper­a­tions.

The offi­cial, who cannot be named because they work under­cov­er, said there appears to be a deal where Kadyrov has a free hand to deal with Chechen rivals and dis­si­dents any­where in the world.

“As bad as the Russians can be, they do sin­cere­ly believe these guys are ter­ror­ists,” the offi­cial said. “So if Kadyrov wants to send guys to kill ter­ror­ists with ham­mers — and the offi­cial Russian ser­vices don’t get involved — they really don’t see this as a prob­lem.”

‘Kadyrov is the only man Putin can really trust’

In a 2015 inter­view, a Chechen fight­er who had fought Kadyrov’s men in both Chechnya and Georgia before fight­ing for jihadist groups in Syria, said that the rela­tion­ship between Putin and Kadyrov is more sym­bi­ot­ic than is often real­ized in the West.

“Chechens are good at fight­ing and extort­ing other Chechens” said “Ramzan,” who did not give a family name. “Putin knows that the Russians cannot con­trol Chechnya them­selves. They always need a Chechen to make fight­ing among the Chechens, to keep them busy with each other.”

So Kadyrov becomes a proxy for Putin so long as he con­tains the unrest in Chechnya. But what Putin gets from this is over­looked, accord­ing to Ramzan.

“Kadyrov is the only man Putin can really trust,” he said. “He [Kadyrov] can never replace Putin and with­out Putin he can be easily over­thrown. So he can be trust­ed with things that Russians who might want power cannot.”