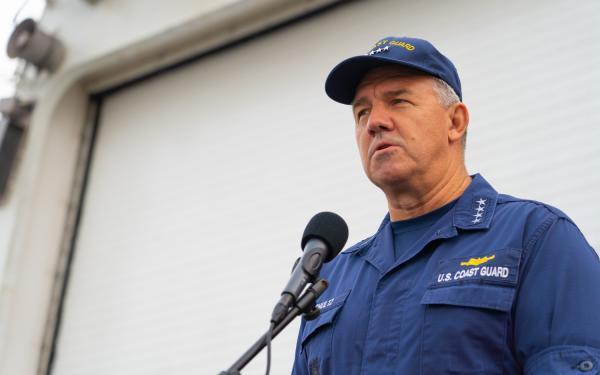 After a long absence, fish and fishery patrols are back as a U.S. Coast Guard priority. In a little-noticed event earlier this month, the U.S. Coast Guard announced a new focus on “Illegal, Unreported, and Unregulated Fishing,” sketching out a broad plan to track and, in time, start rolling back the systemic—and often State-based—depredation of seas worldwide.

While the announcement was crafted to reflect a mere status-oriented “Outlook” on the scourge of illegal, unreported and unregulated fishing, the rollout at the U.S. Coast Guard headquarters in Washington had all the trappings of a fully committed, “all-of-government” strategy. Flanked by Admiral Craig S. Faller, head of Southern Command, Tim Gallaudet, the Assistant Secretary of Commerce for Oceans and Atmosphere at the National Oceanic and Atmospheric Administration (NOAA) and Dr. Benjamin Purser, a Deputy Assistant Secretary at the State Department, the Commandant of the Coast Guard, Admiral Karl L. Schultz, put rogue fishing fleets on notice.

The “Outlook” itself heralds another foresighted Coast Guard effort to focus attention on complex but easily-ignored maritime challenges. To maritime observers, the pattern, by now, should be familiar, as the U.S. Coast Guard is using the same successful template it used to raise awareness of emerging national security issues in the Arctic and the Western Hemisphere. In essence, the Coast Guard, through its latest “Outlook,” is affirming that large-scale economic encroachment at sea and other resource-extraction activities inconsistent with international norms is a destabilizing influence that needs to be controlled. It is signaling that Coast Guard resources will begin putting their “arms around” the problem. But rather than try to do it all, America’s racing-stripe Navy has set out a compelling case for any interested party—both inside and outside of the U.S. government— to join the fight against illegal fishing.

The change in focus will be popular with America’s friends. Many of the Coast Guard’s international partners are already deeply concerned about fishery exploitation. It is right in the Coast Guard wheelhouse. As one vulnerable country after another is targeted for systemic, often state-supported fisheries depredation, desperate local fishers, deprived of their normal livelihood, have little choice but to try their hand at piracy or drug and human trafficking. Widespread acceptance of criminal behavior further destabilizes the host country, causing problems for neighboring maritime law enforcement agencies, that can, in turn, spark big geopolitical crises.

The Coast Guard intuitively understands that the loss of sustainable protein resources drives geopolitical instability, reinforcing illicit behaviors that China and other rivals rely upon to expand their global influence. And rather than wait for guidance, America’s Coast Guard is quietly paving the way for other partners to join in, ensuring fair play at sea.

Fishery Enforcement Gets A Makeover

To focus on fish, the Coast Guard is not simply moving away from drug interdiction. Instead, the Coast Guard is taking the tools and techniques it developed to interdict drugs at sea to better engage dispersed fishing fleets. Information fusion and new multi-mission blue-water platforms now let the Coast Guard switch missions on the fly, while “targeted, effective, intelligence-driven enforcement actions,” maximizes the efficiency of at-sea interdiction forces, dispatching the vessels towards potential violators. While the process is still complex and a bit unwieldy, most U.S. Coast Guard vessels operating in the open ocean are now equipped to accept and process sensitive targeting information and can quickly be directed towards suspect vessels with the highest likelihood of a successful intercept.

For the Coast Guard, a new focus on fishing will be a bit of a change. It has been over forty years since the Fishery Conservation and Management Act of 1976 drove the Coast Guard to really look hard at illegal fishing. Back then, the U.S. Coast Guard had to make an enormous investment to enforce fishing regulations 200 miles from the U.S. shoreline. In the late seventies, the Coast Guard’s 18 big Atlantic-based cutters spent, on average, nine weeks of the year on fishery patrols. The Pacific fisheries demanded even more resources. Overhead, Coast Guard aircraft logged 10,000 hours a year on fisheries surveillance. Whole cutter classes were designed with a focus on enforcing fishery regulations. With no ability to monitor the sea, was a grinding job for Coast Guard cutters to find fishing vessels, board them, and then look for potential violations.

Maritime intelligence was lacking. In those days, National Marine Fisheries Service observers—who sailed aboard foreign fishing boats in U.S. waters—were the primary source of Coast Guard fishery intelligence and accounted for only a quarter of the foreign vessel-days in the fishery conservation zone. Unless an observer raised an issue, the Coast Guard was, essentially, operating blind, stopping and, when weather permitted, searching each fishing vessel they stumbled across.

Maritime Domain Awareness has come a long way since the late seventies. Today, the Coast Guard knows an awful lot about fishing vessel movements. While coverage could be better, and the process of getting actionable intelligence to a cutter or other interdiction asset is still not as easy as it should be, the Coast Guard’s ability to detect illicit activity far outstrips the force’s ability to disrupt that activity. In the Coast Guard effort to interdict narcotics during Fiscal Year 2017, law enforcement forces in the Eastern Pacific were only able to interdict 1 out of every 31 suspected trafficking incidents. While the Coast Guard has gotten some additional interdiction help from the U.S. Navy this year, a stronger Coast Guard focus on fishing will only increase the number of targets, and, without additional capacity, the Coast Guard will struggle under the sheer weight of numbers.

To build capacity, the U.S. Coast Guard is taking a innovative approaches to lighten the load. Certainly, the deterrence value of a single large U.S. cutter when confronting a large fleet of over 300 China-backed fishing boats is an open question, but the Coast Guard is studying how to maximize the effectiveness of its limited number of deep-sea platforms in fishery enforcement. The U.S. Coast Guard is also responding to the concerns of like-minded partners, orienting itself to help interested partners build maritime domain awareness and grow interdiction capability any way they can.

To reduce the number of targets, the U.S. Coast Guard is also focusing beyond the maritime by, in part, unspooling dark business arrangements that support illegal fishing fleets. That will be a challenge in itself, requiring a whole new set of skills and training for “Coasties.” Fishing enforcement may well be less about stopping fishing boats at sea than in stopping flag-of-convenience states, controlling deep-water fishing fleet financing and unspooling the illicit world of furtive at-sea fish transshipments. Deft diplomatic skills are going to be needed, as even some of America’s closest friends indulge in illegal fishing from time to time.

As with any of the Coast Guard’s recent strategic initiatives, the way ahead will not be easy. But the Coast Guard’s initiative is headed to success. It follows the successful template the Coast Guard set in defining America’s Arctic Strategy, parameterizing the problem, outlining how the Coast Guard will move forward, inviting like-minded partners in the United States and overseas to join in. It is, certainly, an ambitious effort for the world’s 12th largest Navy, but the Coast Guard’s capable and steady leadership team is ready to take it on—just as they have, for years, been quietly going out and addressing one overlooked maritime challenge after another. With release of the “Illegal, Unreported and Unregulated Fishing Strategic Outlook” the U.S. Coast Guard is, again, urging a wide array of like-minded partners to join in and make a better, more orderly and peaceful maritime.