By taktik(z) GDI
Posted August 6, 2020
In GDI, State
How to Identify the Militarized Feds the Trump Administration Deployed to Crackdown on Protests2020-08-062020-08-06https://staging.taktikz.com/wp-content/uploads/2015/07/taktikz-Original.jpgtaktik(z) GDIhttps://staging.taktikz.com/wp-content/uploads/2015/07/taktikz-Original.jpg200px200px 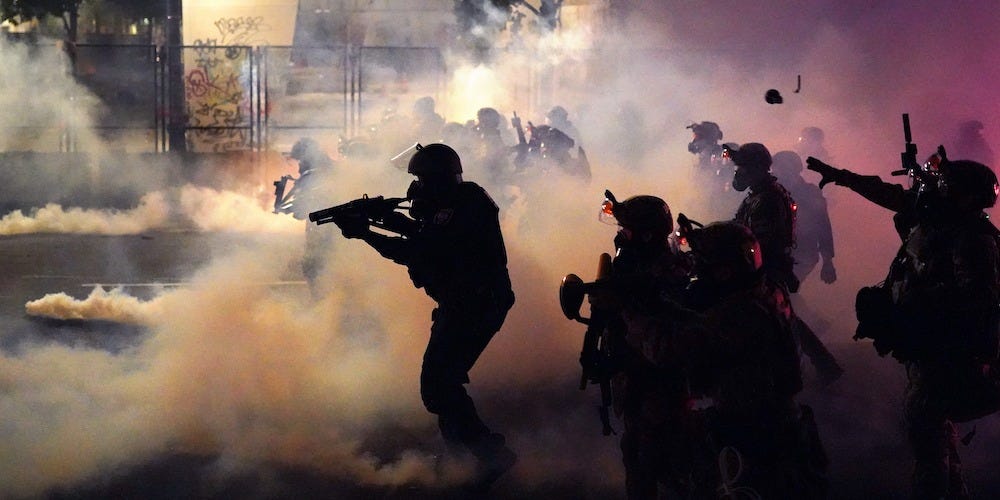 In mid-July, a group of men in military camouflage, ballistic plate carriers, and tactical helmets walked right up to a small group of protesters in Portland and isolated one, who immediately raised his hands up. They put him in an unmarked, rental Dodge Grand Caravan.

Only later, thanks to a cell phone recording made by another protester, did Americans learn those armed men were actually law enforcement officers engaged in an arrest.

The officers were members of Customs and Border Protection’s special response team, known as BORTAC, but they did not identify themselves as such. And as the national media and general public’s eyes turned on Portland, they found over a hundred more federal agents in combat fatigues already there, arresting, tear-gassing, and clashing with demonstrators on a nightly basis on a legal basis many Americans found questionable.

The federal presence in Portland was justified, according to the White House, under an an executive order President Donald Trump signed on protecting monuments in reaction to a  wave of vandalism of statues commemorating figures from the country’s racist past. A passage buried deep in the order states that upon request, the secretary of defense, attorney general, and the secretary of homeland security “shall provide, as appropriate and consistent with applicable law, personnel to assist with the protection of Federal monuments, memorials, statues, or property.”

This jurisdiction is on shaky legal ground. In Oregon, the state attorney general is suing the federal government over agents’ behavior, alleging that the lack of clear identification prevents citizens from being able to tell whether they are being kidnapped by armed civilians or arrested by law enforcement. Congress has begun to respond — Rep. Alexandria Ocasio Cortez (D-NY) has sponsored legislation to force federal agents to wear clear identification, and Rep. Ruben Gallegos (D-AZ), a Marine Corps veteran, has called for agents to stop wearing military camouflage. Gallegos and leadership within the Department of Defense are concerned that the feds’ use of military camouflage is being used to intimidate civilians, as there’s little tactical reason to wear green and brown drab battle uniforms in the urban Pacific Northwest — or any American city.

In recent weeks, the Trump administration has announced deployments of additional DHS and DOJ personnel to Chicago, Albuquerque, and Kansas City, and threatened more. Using open-source information, social media posts, and press photos, we’ve compiled this guide on how to identify the forces in your area and the scope of their jurisdiction.