How the US Military Came Up With Its Salute 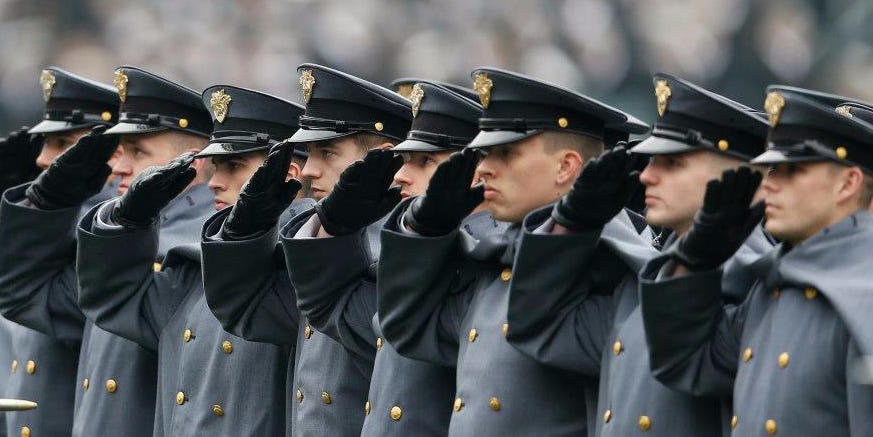 Following is a tran­script of the video.

Robert J. Dalessandro: The origin of the mil­i­tary salute that we use in all the armed ser­vices of the United States is really shroud­ed in mys­tery. We really don’t get a good look at what the quote, unquote cus­toms, and tra­di­tions are until the Army spells them out around World War I.

In the Army, we say that the tra­di­tion cer­tain­ly goes back to Roman times. If you’ve ever seen any of the Roman movies, the Romans would some­times slap their chest and put their arm up in the air as a matter of salute. And they say that that salute had an origin to show alle­giance from your heart and then to show that you didn’t have a weapon in your fight­ing hand — that your hand was open and that you’re a friend. That’s one of the very early origin sto­ries.

There’s a second one. One is that in the times of the knight. A knight who saw a friend­ly knight or to pay trib­ute to a king would raise the visor of his helmet, to let that person see their face. And then, show an open hand, again that they didn’t have a sword in their hand.

If you think about the act of grab­bing the visor of your helmet and lift­ing it up to show your face, and you think about today’s salute where the right arm is taken up and touch­es the brim of your head­gear, helmet, or soft hat, that is very sim­i­lar to this medieval era days of knights.

I would say those are the two most common origin sto­ries of the salute. We know that all of these leg­ends and myths that have been passed down to us on how the salute start­ed — they have in common the idea of show­ing that you are not hos­tile to the person you’re approach­ing, that you don’t have a weapon in your hand, and that you are in fact a person that wants to speak with, and per­haps honor the person you are approach­ing.

EDITOR’S NOTE: This video was orig­i­nal­ly pub­lished in December 2017.