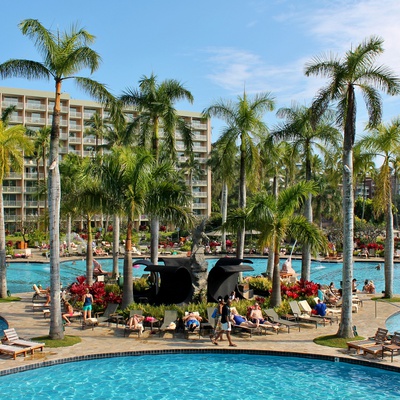 Hotels on the island of Kauai in Hawaii will be allowed to create “resort bub­bles” that allow vis­i­tors to roam a resort’s ameni­ties, like the pool and restau­rants, while they follow the state’s 14-day manda­to­ry quar­an­tine period. The catch? They will need to wear an elec­tron­ic bracelet that the hotel can use to track their move­ments. If some­body wear­ing a bracelet moves off a resort, police would be noti­fied and trav­el­ers could face arrest and crim­i­nal charges for vio­lat­ing the state’s Covid-19 rules. The plan, signed by Gov. David Ige and advo­cat­ed for by Kauai Mayor Derek S. K. Kawakami, does not yet have an imple­men­ta­tion date. “We under­stand the need to address the eco­nom­ic hard­ship facing our tourism-based com­mu­ni­ty, while also pre­serv­ing the safety of our res­i­dents,” Kawakami said in a state­ment. “The resort bubble pro­gram is an added tool to reopen­ing our econ­o­my while we learn to co-exist with this virus.” Kekoa McClellan, a spokesman for the American Hotel and Lodging Association, said all of the island’s hotels are inter­est­ed in the idea. “There are models in place,” said McClellan. “It’s not going to happen overnight. This will take sev­er­al weeks to think through and get the right mechan­ics in place.” [Star Advertiser; Hawaii News Now; Travel and Leisure]

HURRICANE SALLY | Hurricane Sally slammed into Alabama on Wednesday, with the slow-moving storm caus­ing “his­toric and cat­a­stroph­ic” flood­ing in that state and the Florida pan­han­dle. Hundreds of people needed to be res­cued and author­i­ties warned that thou­sands of people would need to be evac­u­at­ed. A new three-mile bridge in Pensacola, Florida was severe­ly dam­aged, with the storm wash­ing away a sec­tion of the struc­ture. “It’s going to be a long time, folks … to come out of this thing,” Escambia County Sheriff David Morgan said. [CNN; AL.com; Associated Press]

DANIEL PRUDE INVESTIGATION | Lovely Warren, the mayor of Rochester, New York, this week removed Police Chief La’Ron Singletary from his job, a week after he announced his plan to retire at the end of the month. The move comes amid an inves­ti­ga­tion into the death of Daniel Prude, a Black man with mental health issues who died after being restrained by offi­cers. “This ini­tial look has shown that we have a per­va­sive prob­lem in the Rochester Police Department,” Warren said. “One that views every­thing through the eyes of the badge, not the cit­i­zens we serve. It shows that Mr. Prude’s death was not taken as seri­ous­ly as it should have been by those who reviewed the case through­out city gov­ern­ment and at every level.” The city attor­ney and Warren’s com­mu­ni­ca­tions direc­tor were also relieved of their dugies for “fail­ure to act, inform and follow policy and pro­ce­dures.” Recently released emails show top police lead­ers asked the city not to release the video of Prude’s death, with then-Deputy Chief Mark Simmons writ­ing that the depart­ment would not “want people to mis­in­ter­pret the offi­cers’ actions and con­flate this inci­dent with any recent killings of unarmed black men by law enforce­ment nation­al­ly.” Simmons is cur­rent­ly the inter­im police chief. [NBC News; Associated Press]

MINNESOTA CAMPAIGNING | With both President Donald Trump and former Vice President Joe Biden making cam­paign stops in Minnesota this week, Gov. Tim Walz asked them to follow state coro­n­avirus safety guide­lines on crowd sizes, masks, and social dis­tanc­ing. “Please demon­strate that you value Minnesota by pro­tect­ing the health of our com­mu­ni­ties. Join us in our efforts to pre­vent the spread of Covid-19, keep our busi­ness­es open, and get back to the activ­i­ties we love,” Walz said. [Star Tribune]