Has Taiwan Always Been Part of China? 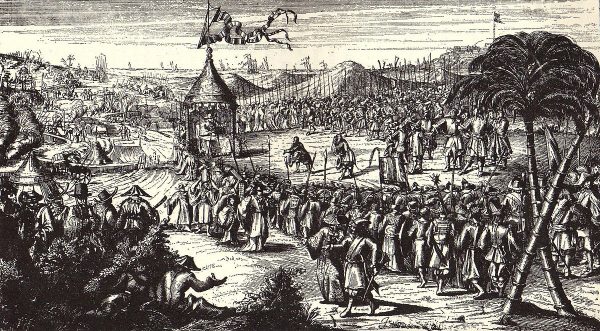 In early November, U.S. Secretary of State Mike Pompeo caused quite an uproar, when, in an interview with the Hugh Hewitt Show, he stated that “Taiwan has not been a part of China, and that was recognized with the work that the Reagan administration did to lay out the policies that the United States has adhered to now for three and a half decades, and done so under both administrations.”

From the context of the remarks it is clear that Pompeo refers to the fact that since its founding in 1949, the People’s Republic of China (PRC) government in Beijing has never had any sovereignty over Taiwan. It has always been ruled independently: first, of course, by the regime of Chiang Kai-shek, who wanted to “recover the mainland.” But since the early 1990s Taiwan has been a vibrant democracy that wants to be accepted as a full and equal member in the international family of nations.

With his mention of “the work of the Reagan administration,” Pompeo refers specifically to one clause in the Six Assurances, promulgated by President Ronald Reagan in July 1982, in which he stated that the United States “has not altered its position regarding sovereignty over Taiwan.”

That referred specifically to the U.S. position that it considered Taiwan’s international status “undetermined,” in accordance with the outcome of the 1951-52 San Francisco Peace Treaty. In that treaty, Japan had formally ceded sovereignty over the island, but it was not decided to whom. Most countries at the 1951 Peace Conference argued that Taiwan’s status needed to be determined in due time, in accordance with the principle of self-determination enshrined in the Charter of the United Nations.

Was Taiwan Part of China During the Ming and Qing Dynasties?

But what about the PRC argument that Taiwan is a “domestic” issue and an inalienable part of China, and has been part of the country since the Ming and Qing dynasties?

When the Dutch East India Company arrived in Taiwan in 1624, they found no traces of any administration by the Ming Dynasty, which ruled China from 1368 through 1644. In fact, the Dutch – who had established a small fortress in the Pescadores in 1622 – were told by the Ming Tianqi Emperor that they should “go beyond our territory,” so the Dutch moved to what was then called Formosa, and ruled the island for 38 years, establishing the first administrative structure on Taiwan. Thus, it certainly was never part of the Ming Dynasty.

Dutch rule ended in 1662, when Ming follower Koxinga – escaping from the newly-established Qing / Manchu Dynasty – sailed from the Fukien (Fujian) coast with some 400 ships and 25,000 men and laid siege around the Dutch fortress Zeelandia. After nine months, the Dutch surrendered, and Koxinga established his rule in the southwestern corner of Taiwan. This would only last for 21 years, until the surrender by his grandson to the forces of the Qing Dynasty in the Battle of Penghu in 1683. Koxinga and his family ruled Taiwan as the independent Kingdom of Tungning, not as part of the Ming Dynasty, which was gone by that time.

The Qing emperor’s aim at the time was to destroy the rebellious Koxinga regime, not to conquer the island. In 1683, the Kangxi Emperor said specifically that “Taiwan is outside our empire and of no great consequence” and even offered to have the Dutch buy it back. Perhaps this is an inconvenient truth for the current rulers in Beijing.

1683 did indeed start a period of some 200-plus years when Taiwan was ruled – mainly indirectly as part of Fukien province – by the Manchu rulers in Beijing. But under Qing rule there were a total of more than 100 recorded rebellions, some requiring more than 50,000 troops to put down. Taiwanese historians characterize it as “Every three years an uprising, every five years a rebellion.” The population considered the Manchu very much as a foreign colonial regime; there was no appetite for being part of China.

In 1887, at the very end of the Qing Dynasty, the Manchu rulers in Beijing did decide to upgrade Taiwan’s status from a subsidiary of Fukien to a formal province of China. This was mainly done to ward off French and Japanese attempts to establish a colony on Taiwan, but the governor appointed by Beijing, Liu Mingchuan, did a lot to develop the island, introducing electricity, starting a railway from Keelung to the south, and setting up a telegraph cable network. But the modernization process lasted only eight years.

The next episode is probably even more telling. When Japan won the 1894-1895 Sino-Japanese war, the Qing government in Beijing agreed under Treaty of Shimonoseki that Taiwan would be ceded to Japan in perpetuity. The elites in Taiwan, including governor Tang Jingsong, sided with the local Taiwanese gentry and declared an independent Formosa Republic to forestall becoming part of Japan.

The republic was short-lived because of the overwhelming force of the Japanese, but it did mount major resistance, particularly by the local militia in central and southern Taiwan. The leader of the regular army was the famous “Black Flag” general Liu Yongfu, who commanded an army of some 100,000 soldiers. There was not much appetite for becoming part of Japan, either.

A Model Colony of Japan

Taiwan did become a Japanese colony in 1895, and certainly in the first 20-some years there were a lot of rebellions and uprisings against Japanese rule by the local Hoklo, Hakka, and aborigine populations. But the Japanese did much to improve infrastructure, building roads, railroads, harbors, hospitals, and schools. By the 1920s the island had become a prosperous model colony with a good educational system and health care, but with strict governance.

It is important to note that during the 1920s and 1930s, when Chiang Kai-shek and Mao Zedong were fighting for supremacy in China, neither the Nationalists not the Communists cared very much for Taiwan. In fact, both Chiang and Mao are reported to have expressed their support for Taiwan independence, from Japan of course.

Their respective positions started to change in 1942-43, when in the run-up to the November 1943 Cairo Conference Chiang Kai-shek started to claim that Taiwan should be “returned to China.” Not to be left behind, similar statements were made by Chinese Communist Party leaders. Taiwan thus became a pawn in the competing narratives of the Kuomintang and CCP. Details can be found in Richard C. Bush’s book “At Cross Purposes: U.S.-Taiwan Relations Since 1942.”

Status “To Be Determined”

Taiwan’s formal status became nebulous after the Japanese surrender in August 1945. During the period 1945-1949, Taiwan was officially considered “occupied by the ROC [Republic of China] on behalf of the Allied Forces.” Its status was to be determined later, via the formal treaty that would end World War II, which eventually became the San Francisco Peace Treaty of 1951-52. The U.S. government thus did not formally consider Taiwan to be “part of China,” but it was obviously administered – pretty badly – by the Chinese Nationalist (Kuomintang, or KMT) forces of Chiang Kai-shek and the ROC.

Of course the KMT government itself took the position that Taiwan had been “returned” to China on Retrocession Day on October 25, 1945. But the U.S. government never recognized that position. Some in the U.S. government, such as General Douglas MacArthur, continued to push for a referendum under the auspices of the U.N., but after MacArthur’s falling-out with President Harry Truman his advice was not followed. However, the debate showed that the United States had not taken the position that during the period “Taiwan was part of China.”

1949 Until the Present: Separate Existence

From the abovementioned information it is clear that the claim “Taiwan has always been part of China” is dubious at best. It was always at the periphery – and most of the time outside the periphery – of the Chinese empire.

And from recent history it is also clear that the PRC – established in 1949 – and the ROC/Taiwan have gone very different ways. The PRC has undoubtedly become a powerful and influential world power, but it is still ruled by a repressive, authoritarian CCP regime under President Xi Jinping.

Taiwan on the other hand has morphed from a repressive, authoritarian regime under Chiang Kai-shek and the KMT to being a vibrant democracy, with the once-opposition Democratic Progressive Party now holding both the presidency and legislature. The country has its own proud history, has developed its own unique Taiwanese identity, and is eager to play its role as a full and equal member in the international community – a role it has been denied due to the competing narratives of the Chinese Nationalists and Communists. In that sense, Pompeo deserves thanks for countering those narratives, and for looking at Taiwan in its own right and its own light.

Gerrit van der Wees is a former Dutch diplomat. From 1980 through 2016 he served as chief-editor of “Taiwan Communique.” He currently teaches the history of Taiwan at George Mason University and current issues in East Asia at George Washington University.