Harvest Moon 2020: When and How to See October’s Full Moon 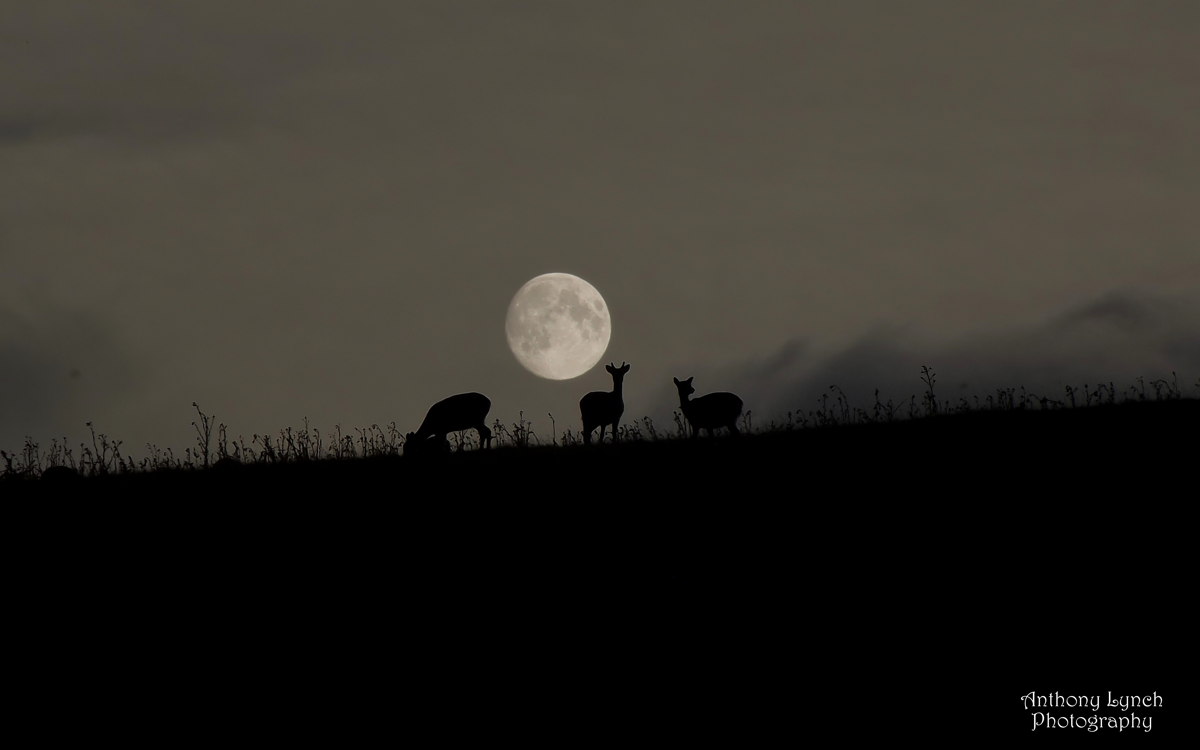 The full moon of October 2020, called the Harvest Moon, will grace the skies this week on Thursday (Oct. 1).

That’s the same day that the planet Mercury reach­es its great­est east­ern elon­ga­tion, or the fur­thest dis­tance east of the sun. That means on the night of the full moon Mercury will be vis­i­ble after sunset, though still close to the hori­zon.

The moon becomes offi­cial­ly full on Oct.1 at 5:05 p.m. EDT (2108 UTC), accord­ing to NASA’s SkyCal site. For New York City observers, the moon will rise on that day at 6:57 p.m. local time and set the next morn­ing at 7:23 a.m. Rising about 20 min­utes after sunset (which will happen at 6:37 p.m., per timeanddate.com) the moon will be in the con­stel­la­tion Cetus, the whale, a faint group of stars that will be mostly over­whelmed by the moon itself.

Given that it is autumn in the Northern Hemisphere, the moon will reach a max­i­mal alti­tude of about 47 degrees at mid­night in New York. As one moves south the moon’s alti­tude will increase, and the reverse is true as one moves north. For Southern Hemisphere sky­watch­ers in Melbourne, Australia, the full moon will occur at 7:05 a.m. local time on October 2, rising at 6:41 p.m., and reach­ing a max­i­mum alti­tude of about 50 degrees.

The October full moon is often called the Hunter's Moon, accord­ing to the Old Farmer’s Almanac, because that moon occurs when the season for hunt­ing many game ani­mals begins. This year, the Oct. 1 full moon is also the Harvest Moon of 2020, as it falls closer to the autum­nal equinox on Sept. 22 than the September full moon on Sept. 2. September’s moon was known as the full Corn moon.

Traditional names for the full moon often reflect local envi­ron­ment and his­to­ry; accord­ing to the Ontario Native Literacy Coalition, the Ojibwe people called October’s full moon the “Mskawji Giizis,” or the Freezing Moon, because October is when the first frosts occur in their tra­di­tion­al ter­ri­to­ry in the Great Lakes region. The Cree people called it “Pimahamowipisim” (Migrating Moon), as in North America, many bird species start migrat­ing south for the winter in mid-autumn.

In the Pacific Northwest, the Tlingit called the October full moon “Dís Tlein” (Big Moon), while the Haida called the moon “Kalk Kungaay,” or the Ice Moon, accord­ing to the “Tlingit Moon and Tide Teaching Resource” pub­lished by the University of Alaska Fairbanks.

Traditional Chinese cal­en­dars call the eighth full moon as Guìyuè, or Osmanthus Month for the epony­mous flower, mark­ing the start of the Mid-Autumn Festival. The Festival is also called the “Mooncake Festival” for the food of the same name. One of the more impor­tant hol­i­days in China, some­times called “Chinese Thanksgiving,” this year also hap­pens to fall on China’s National Day, which com­mem­o­rates the found­ing of the People’s Republic

Harvesting by the light of the moon

On aver­age, October Harvest Moons come at three-year inter­vals, although the time frame can be quite vari­able, and there can be sit­u­a­tions where as much as eight years can elapse (the next such exam­ple will come between 2020 and 2028).

Many think that the Harvest Moon remains in the night sky longer than any of the other full moons we see during the year, but that is not so. What sets this mon­th’s full moon apart from the others is that farm­ers at the climax of the cur­rent har­vest season can work late into the night by the moon’s light.

So, for sev­er­al days before and after the full moon, the moon hangs in the sky like a great, glow­ing lantern and pro­longs the light far after sunset. It rises about the time the sun sets, but more impor­tant­ly, at this time of year, instead of rising at its normal aver­age of 50 min­utes later each day, the moon seems to rise at nearly the same time each night.

Mercury will reach great­est east­ern elon­ga­tion at 11:59 p.m., accord­ing to NASA, which will be well after it sets in New York, which will be at 7:20 p.m., accord­ing to heavens-above.com cal­cu­la­tions. But the planet will still be about 8 degrees above the south­west­ern hori­zon at sunset, in the con­stel­la­tion Virgo. Finding it will still be tricky because from mid-north­ern lat­i­tudes it will be so close to the hori­zon.

The planet itself will shine mag­ni­tude 0.0, about as bright as Vega. The sun reach­es about 6 degrees below the hori­zon – called nau­ti­cal twi­light because the bright­est stars become vis­i­ble, making it pos­si­ble to nav­i­gate at sea – at about 7:04 p.m. in New York, and Mercury will be only 2 to 3 degrees in alti­tude. Seeing it will require some patience and the abil­i­ty to pick out the planet against a still-light sky.

The sit­u­a­tion for seeing Mercury improves as one moves south. In Miami, the sun sets at 7:06 p.m. local time, and Mercury sets at 8:10 p.m., and is at an alti­tude of about 13 degrees at sunset, and the planet will be at about 8 degrees when nau­ti­cal twi­light begins at 7:29 p.m.

Further south, as one gets to the Southern Hemisphere, Mercury is higher because the angle the plane of the Earth’s orbit, called the eclip­tic, makes with the hori­zon is steep­er. The eclip­tic also marks the yearly path of the sun across the sky, and in fall and winter, when the sun is low, that path is closer to the hori­zon, where­as in the summer it is higher (and the sun appears higher in the sky).

Southern Hemisphere sea­sons are reversed, so observers locat­ed there are enter­ing the summer months. The result is that Mercury, from the point of view of a res­i­dent of Melbourne, reach­es great­est elon­ga­tion at 1:59 a.m. on Oct. 2, and at sunset on that day, which occurs at 6:25 p.m., the planet is a full 24 degrees above the north­west­ern hori­zon.

Venus will still be a “morn­ing star” rising at 3:31 a.m. local time in New York on Oct. 1. Sunrise is not until 6:53 a.m. local time, and the planet will be 38 degrees in alti­tude by then. Venus is bright enough that it will stay vis­i­ble even as the sky becomes light. Venus will be in the con­stel­la­tion Leo, making a close pair with the star Regulus which will be just below and to its left. Venus will be the brighter of the two, appear­ing bright white to Regulus’ more yel­low­ish hue.

On the night of the full moon, Mars will follow our nat­ur­al satel­lite, rising at 7:26 p.m. local time, appear­ing to the left of the moon as they travel togeth­er across the sky. The moon moves approx­i­mate­ly one of its own diam­e­ters per hour rel­a­tive to the back­ground stars, which means that over the course of the night the two will appear to approach each other very slowly. By the next night, Oct. 2, the two will be in con­junc­tion, or shar­ing the same celes­tial lon­gi­tude, at 11:25 p.m. local time. The two will be sep­a­rat­ed by 43 min­utes of arc, or a bit more than a lunar diam­e­ter. Both will be in the con­stel­la­tion Pisces.

Jupiter and Saturn will both be in the con­stel­la­tion Sagittarius, and be in the west­ern half of the sky by 8:00 p.m. Eastern Time. From New York City they will be respec­tive­ly about 26 and 28 degrees in alti­tude. Saturn will be to Jupiter’s left, with the “teapot” shape of Sagittarius to the right of Jupiter.

Looking direct­ly up from the two giant plan­ets observers will see Altair and then Vega, which form part of the Summer Triangle. In the Northern Hemisphere the Summer Triangle stars are fading from view; after mid­night in October they are low in the west­ern sky. Turning north­ward form Jupiter and Saturn one will see Arcturus, in the con­stel­la­tion Boötes, which in mid-north­ern lat­i­tudes will be in the north­west.

As the full moon rises in the east, one can trace a path “above” the moon  and see the Great Square aster­ism which marks the con­stel­la­tions Pegasus and Andromeda. Both con­stel­la­tions are not espe­cial­ly bright, and one might have to let one’s eyes adjust by not look­ing direct­ly at the very bright moon for a few sec­onds. Andromeda con­tains the Andromeda Galaxy, M31, but with a full moon that’s a more chal­leng­ing object to see.

Some of the bright winter con­stel­la­tions start to become promi­nent in October. Orion and Taurus are above the hori­zon in the east by mid­night.

Editor’s Note: If you take an amaz­ing photo of the Harvest Moon that you’d like to share for a pos­si­ble story or image gallery, send images and com­ments in to spacephotos@space.com. Space.com sky­watch­ing colum­nist Joe Rao con­tributed to this report.