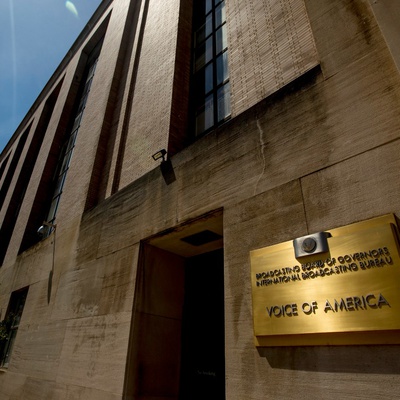 On Monday night, the head of the U.S. Agency for Global Media rescinded a regulation implemented right before he took office that clarified the protections of the “firewall” that safeguards journalistic independence.

Michael Pack was installed on June 17 as the first CEO of the media agency, following the Broadcasting Board of Governors’ restructuring and renaming in 2018, and has been making sweeping changes ever since. The latest takes aim at the “firewall,” which was first enacted in Voice of America’s charter in 1976, codified in 1994, then strengthened in 2016 to prevent political interference in the taxpayer-funded news broadcasting service. Pack rescinded a rule that was implemented two days before he took over that clarified the “practical meaning and impact of the statutory firewall” in the 1994 law.

“The [June 15] rule threatened constitutional values because the Constitution gives the president broad latitude in directing the foreign policy of the United States,”  Pack said in a statement on Monday. “The president’s representatives in furthering U.S. foreign policy interests, includ[e] USAGM and its CEO. Beyond the legalities, the rule made the agency difficult to manage. No agency run by a CEO, or another type of head, has any kind of ‘firewall’ between himself and the rest of his agency. An organization, especially a large one, cannot be successful if senior management is limited in overseeing and managing personnel below it.”

Pack outlined that with the rule the agency’s leadership could not: prevent the publication of stories that would harm U.S. soldiers, exclude the use of classified information, issue policies to require journalists to not advocate for political positions and enforce ramifications for violating the media agency’s charter banning actions such as biased reporting. He said he is in charge of making the agency more “efficient” and “effective” in his role as CEO––in which he oversees VOA, the Office of Cuba Broadcasting, Radio Free Europe/Radio Liberty, Middle East Broadcasting Networks, Radio Free Asia, and the Open Technology Fund (an independent nonprofit within the agency dedicated to internet freedom).

“The regulation was promulgated only when it became apparent that the leadership of USAGM was about to change via Senate confirmation” of Pack, said the notice of the repeal. It “suggests [that] USAGM is a typical broadcasting organization, which squarely contradicts USAGM’s statutory mandate to promote particular United States values and interests.”

“While some may see this as a fundamental assault on the agency’s statutory mission to provide fair and balanced news coverage on behalf of the United States government, the repeal of the regulation only returns VOA and the agency to the pre-June 15 practices regarding the firewall,” he wrote. “As was the case before the regulation, it is my position that the repeal does not allow government officials to tamper with or otherwise distort VOA content.”

Biberaj also said he is “fully committed to protecting VOA’s journalistic integrity” and commended the agency’s work during the novel coronavirus pandemic and election season to bring content to an audience of 280 million worldwide.

However, others expressed questions and misgivings about the repeal.

The June 15 rule essentially “summarizes the terms of the firewall enshrined in law over decades on a bipartisan basis…The firewall VOA operates under didn’t start [in June] it does not disappear because Mr. Pack now says late one night ‘never mind,'” according to David Z. Seide, senior counsel at the Government Accountability Project, which represents current and former USAGM officials in multiple whistleblower cases. The revocation is at most symbolic and represents a “weird Hail Mary” days ahead of the presidential election, he told Government Executive.

“Michael Pack is undermining audience confidence in[Radio Free Europe/Radio Liberty] and the other USAGM networks,” tweeted Jamie Fly on Tuesday. “He is not just laying the groundwork to politicize their journalism, he is putting the journalists at risk.” Pack removed Fly as RFE/RL head.

Theodore Boutrous Jr., an attorney representing five officials suspended under Pack, told NPR the move “confirms the allegations in our suit,” filed in October, that says Pack and his allies are breaking the law to support President Trump’s agenda.

Rep. Eliot Engel, D-N.Y., chairman of the House Foreign Affairs Committee, renewed his call for Pack to be fired or resign, following the news.

“Congress created that firewall by law and although Mr. Pack can huff and puff, he can’t blow that wall down,” Engel said in a statement on Tuesday. “The rule he rescinded yesterday clarified the legal protections. The firewall remains. I encourage USAGM journalists to continue carrying out their important work and to ignore illegal interference from Mr. Pack and other administration officials.”

After accusing VOA of promoting Chinese propaganda (which VOA denied), during a briefing on the pandemic in April, Trump talked up how Pack ––an ally and former colleague of Steve Bannon, former Breitbart News executive and White House chief strategist–– would run the agency, if confirmed.

Pack’s controversial tenure at the agency has included his immediate removal of the heads of Middle East Broadcasting, Radio Free Asia, Radio Free Europe/Radio Liberty, and the Open Technology Fund, dissolution of their boards and a change in the process for publishing editorials.

Also, former officials testified in late September that Pack refused to support the renewal of visas for dozens of foreign national journalists working for VOA and other outlets (suggesting some of those them could be spies), withheld appropriations from the Open Technology Fund, and would not sign basic contracts for things like cleaning supplies and toilet paper for its global facilities. Pack defied a subpoena to attend the hearing.

The revocation of the firewall rule comes a week out from the presidential election. Andrew Bates, spokesman for former Vice President Joe Biden’s presidential campaign, told Vox in June that Biden would fire Pack if he wins the election because Pack’s “actions risk hijacking invaluable, nonpartisan media institutions that stand up for fundamental American values like freedom and democracy in the world.”