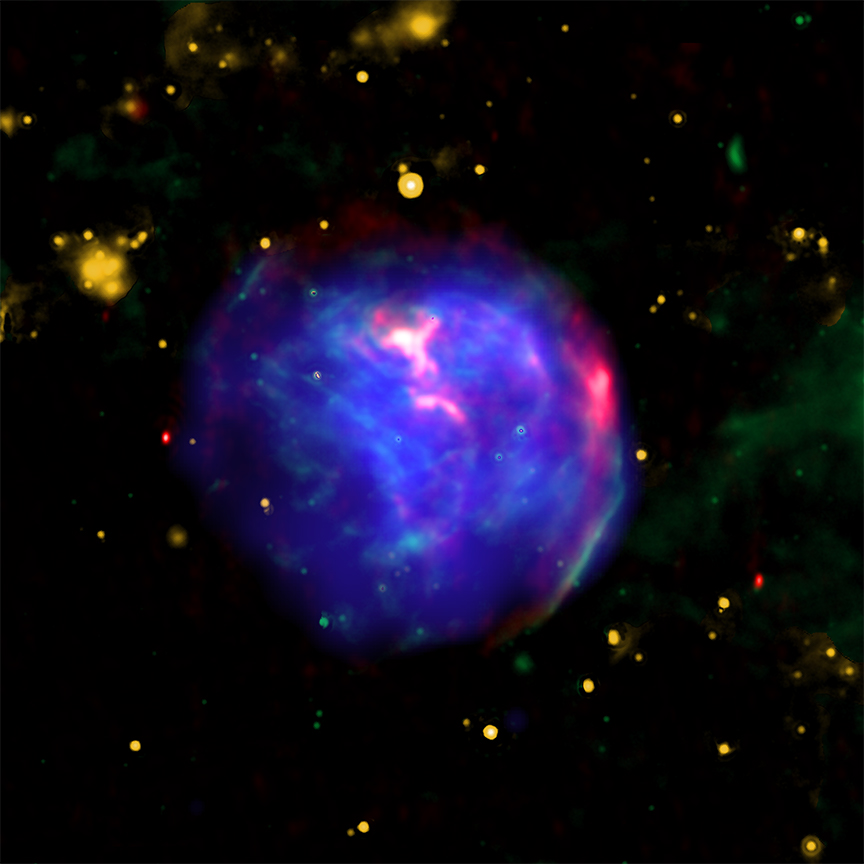 NASA telescopes have captured the colorful blast of a stellar explosion thousands of years ago, shedding new light on the evolution of such cosmic remains.

When a star reaches the end of its life, it explodes in a bright burst called a supernova. White dwarfs are the dim, fading corpses of stars that have exhausted most of their nuclear fuel and shed their outer layers. Having shrunk to a relatively small size, white dwarfs are considered among the most stable of stars, given they can last for billions or even trillions of years.

However, when a white dwarf passes near a neighboring star it may siphon too much material from its companion, causing it to grow unstable and explode, resulting in a Type Ia supernova. That is the case of a stellar remnant — formally known as G344.7-0.1 — that is located roughly 19,600 light-years from Earth, and believed to be between 3,000 and 6,000 years old, according to a statement from NASA’s Chandra X-ray Observatory.

A new composite image captures views of the stellar remnant in X-ray, infrared and radio wavelengths. Data from NASA’s Chandra X-ray Observatory and Spitzer Space Telescope, along with the National Science Foundation’s Very Large Array and the Australia Telescope Compact Array, was used to create the detailed image.

The new view of G344.7-0.1 shows that stellar debris expands outward after the initial stellar explosion, then encounters resistance from surrounding gas. This resistance slows down the debris, creating a reverse shock wave that travels back toward the center of the explosion, heating the surrounding debris in its path, according to the statement.

“This process is analogous to a traffic jam on a highway, where as time passes an increasing number of cars will stop or slow down behind the accident, causing the traffic jam to travel backwards,” Chandra personnel wrote in the statement. “The reverse shock heats the debris to millions of degrees, causing it to glow in X-rays.”

Additionally, the Chandra X-ray data revealed the supernova remnant contains iron near its core, which is surrounded by arc-like structures containing silicon. The data shows that the regions containing iron were more recently heated by the reverse shock wave, supporting Type Ia supernova models that predict heavier elements, like iron, are produced at the center of these stellar explosions, according to the statement.

The research accompanying the new image was published in The Astrophysical Journal in 2020.