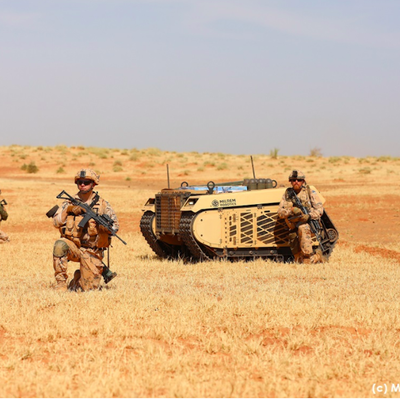 Over the two days, delegates “shared lessons learned and best practices in harnessing AI for their respective and shared defense missions,” according to a statement from the host organization, the Pentagon’s Joint Artificial Intelligence Center, or JAIC.

But the bigger goal is to bring together like-minded countries to “shape what responsible AI looks like,” said Mark Beall, the JAIC’s chief of strategy.

In addition to being like-minded democracies, the countries on the list represent those that were the “furthest along and most interested in working with the JAIC” on key issues, Beall said.

Some of the countries on the list are more obvious players in AI than others. Japan has long been a key innovative force in AI and robotics, with research efforts going back to the 1960s, with a Kyoto University research group led by Toshiyuki Sakai. (The group unveiled a primordial facial recognition system at the 1970 Osaka Expo.)

Others have emerged more recently. Estonia, which hosts a NATO Center of Excellence for cyber, is quickly becoming a major center for ground robotics. It is working to develop and make ground robots with Finland, which in 2017 published an AI strategy to help govern its development in the field.

Missing from the list are some obvious allies, such as Germany. But Beall said he expects more countries to join in later dialogues, especially those that have an interest in exercising and collaborating with the U.S. military. The partnership is also about interoperability, “especially around data sharing, ontologies and development that helps make systems secure. And it’s about who has great talent and great technology and how do we figure out how to share it.”

The conversations around best practices and ethics will “lay the foundation for interoperability in lots of different ways” said Stephanie Culberson, the JAIC’s chief of international affairs. “We want to make sure our treaty allies, partners, people that—if we’re forced to go to war, we’ll go to war with—that they’re taking safety and responsible AI very seriously.”

In February, the Pentagon adopted a list of AI principles to guide the building, testing, and deploying of AI. While the partnership dialogues will touch on those principles, Beall says that the point is not necessarily to get the other countries to follow the United States. “I would definitely advocate for our allies to adopt their own set of ethical principles. Many of them are on this journey right now.”

Said Culberson, “The goal of this not to talk them into adopting ours at all but more the process of how we got to ours.”