Four Exotic Items From the India-China Border in Arunachal Pradesh 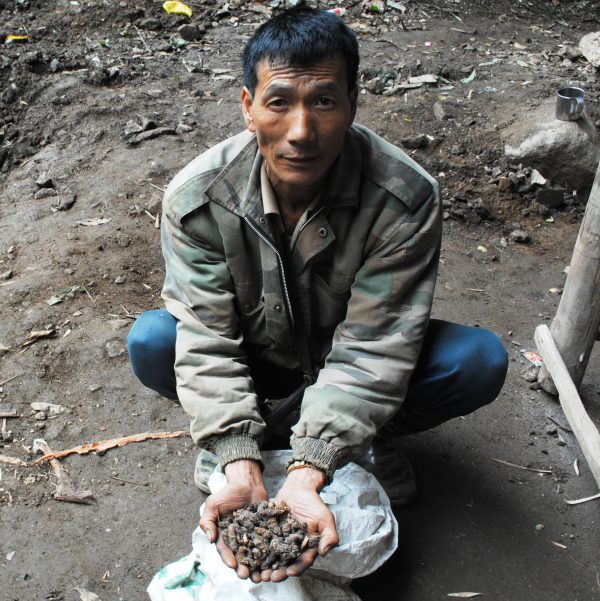 Five men who went missing in India’s border state of Arunachal Pradesh last month were handed over by China after 10 days’ detention.

Different versions have been articulated as to the reasons that led the youths to visit the hilly border which is a bone of contention between the two neighbors.

The Indian Army’s account that the five residents were on a hunting trip does not tally with the account of their families who said they were porters for the army.

The controversy notwithstanding, what is certain is that the local residents of the border state are employed as porters and guides by both the army and Indo Tibetan Border Police (ITBP) during long range patrols to the border that sometimes take weeks to complete.

Many porters engage in hunting and gathering of items during the itinerary that sell at exorbitant rates in the international market. There are  also separate expeditions mounted every year by squads of locals to certain zones along the border.

This is not the first time that residents of Arunachal Pradesh were whisked away by Chinese troops and released after days of detention. A similar incident happened last March when three men were apprehended after they had gone to collect herbs along the border.

A significant stretch of the 1126-kilometres of the border in Arunachal Pradesh is inaccessible but also a treasure-trove of exotic items that prompt a large section of people to embark upon hunting assignments every year.

These commodities are sold to agents in some district headquarters who are part of a network that connect the state capital of Itanagar and Dibrugarh in Assam. The items are believed to be smuggled out of the country through multiple routes in Myanmar and Nepal.

Four items, in particular, scattered along the entire border in Arunachal Pradesh are sought after by the hunters. Occasionally, tales are heard in the border hamlets about hazardous missions when hunters meet with accidents never to return home.

Paris polyphylla is the most easily available among the four items which has been listed as a vulnerable medicinal plant by the International Union for Conservation of Nature (IUCN).  Termed locally as “Rinke” and “Kola Kochu,” it grows mainly in moist and shady areas of forests, thickets, bamboo forests, grassy or rocky slopes and nearby water channel in rich humus soil.

An official said that Paris polyphylla is found in almost all districts of Arunachal Pradesh but more in Upper Subansiri, Upper Siang and Dibang Valley. A study carried out by the Rajiv Gandhi University found the existence of four varieties of the herb in the hill state that grows at an altitude of 1000-3500 meters.

A kilogram of Paris polyphylla fetches 4,000-5,000 Indian rupees either in Arunachal Pradesh or Assam. Concerned over the rampant smuggling of the plant, environment and forest minister of the state Nabam Rebia said two years ago that efforts were being made to formulate guidelines and modalities for cultivation, harvesting and commercialization of important medicinal plants including Paris polyphylla.

The trade in yarsagumba is a multibillion dollar industry spanning the U.S., China, and Singapore. It is a caterpillar-fungus fusion that occurs when a mushroom infects and embalms a ghost moth larva living in the soil. A wobbly fungus later sprouts from the dead caterpillar which is 2-6 centimeters long above the soil.

Used in traditional Chinese medicine, yarsagumba is believed to treat cancer, asthma and cure impotence. It is found in altitudes between 3,000 and 5,000 meters in Nepal, Tibet, Bhutan and India. It grows only for four months between May and August.

In Arunachal Pradesh, it is more available in the eastern districts of Tawang, East and West Kameng where the border is at a higher elevation than in the west. A kilogram of the item may be sold at a price as high as 400,000-500,000 Indian rupees.

Musk Deer and Asiatic Bear: Gems in the Hills

Like the other items, both animals are also used for the manufacture of traditional medicines in China and South East Asia. The adult male musk deer secretes musk used in a range of medicines and other products. Likewise, the bile of the bear is also used to manufacture medicines, and the Chinese government had recently recommended its use in the treatment of critical COVID-19 cases.

A local resident and hunter at Yinkiong was of the view that the population of both the animals has drastically reduced in Arunachal Pradesh. He pointed that about 10 grams of the navel of the musk deer could be sold for 35,000-40,000 to agents at certain locations in the state.

Notices by the government urging the local residents to abstain from hunting Musk Deer can be spotted in many villages near the border in Arunachal Pradesh.

Rajeev Bhattacharyya is a senior journalist in Assam, India