Fortress Britain? Is It Time to Rethink How We Defend the UK From Attack?

Last week there were reports in the media that the UK is considering using text messages to provide warning of imminent attack by ballistic missiles. The idea attracted a mixture of scorn and ridicule, with people seeing it as the new version of the ‘four minute warning’ and wondering what possible difference it could make. In fact the idea has a lot of quite interesting potential benefits and is worth considering further.
Theso-called ‘four minute warning’ dates back to the Cold War when as early warning radar systems came on line, the ability to gain advanced warning of an incoming attack grew. In practical terms there was never a guarantee about the actual time people would have got, but the hope was that there would be at least four minutes notice.
While this doesn’t sound a lot, it is worth remembering that ballistic missiles fired at the UK from the Soviet Union would only be airborne for a relatively short time due to their speed and flight distance, so the reality is there would only ever be a short window of warning time. 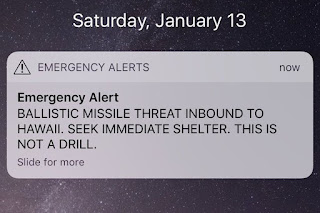