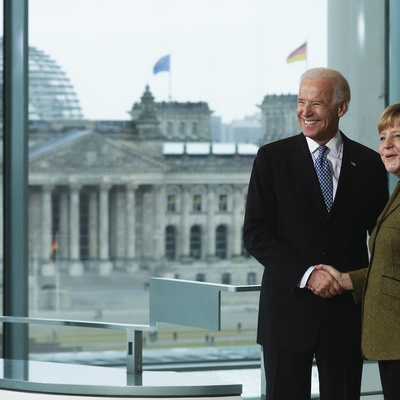 Heads of state around the globe were quick to congratulate President-elect Joe Biden and Vice President-elect Kamala Harris on Saturday, even as President Donald Trump continued to contest the election results, reject news organizations’ vote-count projections, and falsely claim that he had won.

The leaders of most Western European allied states appeared eager to sound optimistic notes about working with the forthcoming Biden administration on a host of issues from climate change to the COVID pandemic/ They also largely ignored Trump’s protests.

Their public recognition of Biden as the victor could help to cement the legitimacy of his electoral college win among ardent Trump supporters who maintain, at Trump’s insistence, that their candidate has not yet lost the presidency.

“Joe Biden will be the 46th President of the United States of America. I sincerely wish him the best of luck and every success and I would also like to congratulate Kamala Harris, the first female vice president-elect in the history of your country,” said German Chancellor Angela Merkel, in an official statement. “I look forward to working with President Biden. Our trans-Atlantic friendship is indispensable if we are to deal with the major challenges of our time.”

“The Americans have chosen their President. Congratulations @JoeBiden and @KamalaHarris! We have a lot to do to overcome today’s challenges. Let’s work together!” said French President Emmanuel Macron.

“I congratulate Joe Biden and Kamala Harris on their election as the next President and Vice President of the United States of America,” said Canadian Prime Minister Justin Trudeau, who had several public disagreements with Trump, including at last year’s NATO 70th anniversary meeting in London.

Russia’s Vladimir Putin, whose government interfered on Trump’s behalf in the 2016 election and again in 2020, according to the FBI and CIA, has yet to issue a statement on the president’s defeat. Putin spoke on the phone with Turkey’s Recip Erdogan today, who also has yet to comment on the U.S. election result.

Iran’s Vice President Eshaq Jahangiri said in a series of tweets, according to a translation, “The era of Trump and his adventurous and belligerent team is over.” Jahangiri said Iran had “resisted Trump’s policy of maximum pressure” and cited the assasination of Qasam Solemani.  “I hope we will see a change in America’s destructive policies and a return to international law and obligations and respect for our nation.”

German Foreign Minister Heiko Maas was quick to put forward a brief outline of a new transatlantic agenda. “Our offer stands: for a new transatlantic start, a ‘New Deal,’” Maas said. “We will therefore approach the elected government after the election is over. We will make specific proposals on how we can close the transatlantic ranks: in dealing with actors like China, in climate protection, in the global fight against the corona pandemic.”

NATO Secretary-General Jens Stoltenberg congratulated the incoming administration, tweeting, “I know Joe Biden as a strong supporter of our Alliance & look forward to working closely with him. A strong #NATO is good for both North America & Europe.”

European Council President Charles Michel, also congratulated Biden and Harris. “We welcome the record voter turnout. We follow the process of certification of results and are confident that the US electoral system will soon announce the final outcome,” said Michel, whose organization has long been a favorite punching bag for Trump. “The EU underlines, once again, its commitment to a strong transatlantic partnership and stands ready to engage with the elected President, new Congress and Administration.”

Italian Prime Minister Giuseppe Conte tweeted, “Congratulations to the American people and institutions for an outstanding turnout of democratic vitality. We are ready to work with the President-elect @JoeBiden to make the transatlantic relationship stronger. The US can count on Italy as a solid Ally and a strategic partner.”

Erna Stolberg, prime minister of Norway, wrote, “The US is Norway’s most important ally and we work closely together in many areas. I look forward to developing our cooperation with the US under Mr Biden’s & @KamalaHarris leadership.”

Iraq’s President Barham Salih extended “warmest congratulations to President-elect @JoeBiden, a friend and trusted partner in the cause of building a better Iraq. We look forward to working to achieve our common goals and strengthening peace and stability in the entire Middle East.”

Ukraine’s president Volodymyr Zelensky seemed to take a swipe at Trump and his allies, who have tried to coerce Zelensky and others Ukranian officials into delivering political dirt on Biden, saying a tweet, “Congratulations to @JoeBiden @KamalaHarris! #Ukraine is optimistic about the future of the strategic partnership with the #UnitedStates. [Ukraine] and [The United States] have always collaborated on security, trade, investment, democracy, fight against corruption. Our friendship becomes only stronger!”

Petro Poroshenko, the former Ukrainian president, was also quick to tweet his support and congratulations: “Ukraine is lucky with the President of the United States, who has such a deep and personal knowledge of our state. Together with Ukraine’s strong bipartisan support, we very much look forward to the United States’ committed transatlantic leadership in the interests of the Free World.”

India’s Prime Minister Narendra Modi posted a special shoutout to Vice President-elect Kamala Harris, whose mother immigrated from India to the United States. “Your success is pathbreaking, and a matter of immense pride not just for your chittis, but also for all Indian-Americans. I am confident that the vibrant India-US ties will get even stronger with your support and leadership.”

Even Boris Johnson, the UK prime minister, and Andrzej Duda, president of Poland, two of Trump’s most important political allies in Europe, didn’t wait for the U.S. leader to concede before congratulating and officially recognizing Joe Biden as president-elect.

Not every government has hopped on the bandwagon. Israel’s Prime Minister Benjamin Netanyahu, considered a staunch Trump ally, is withholding formal recognition of the incoming Biden administration until “official results” are in, but did not specify what metric that meant.  Brazil’s populist strongman President Jair Bolsonaro has also remained noncommittal, which could portend poorly for Bolsonaro’s partnership with the United States on some trade and climate issues.