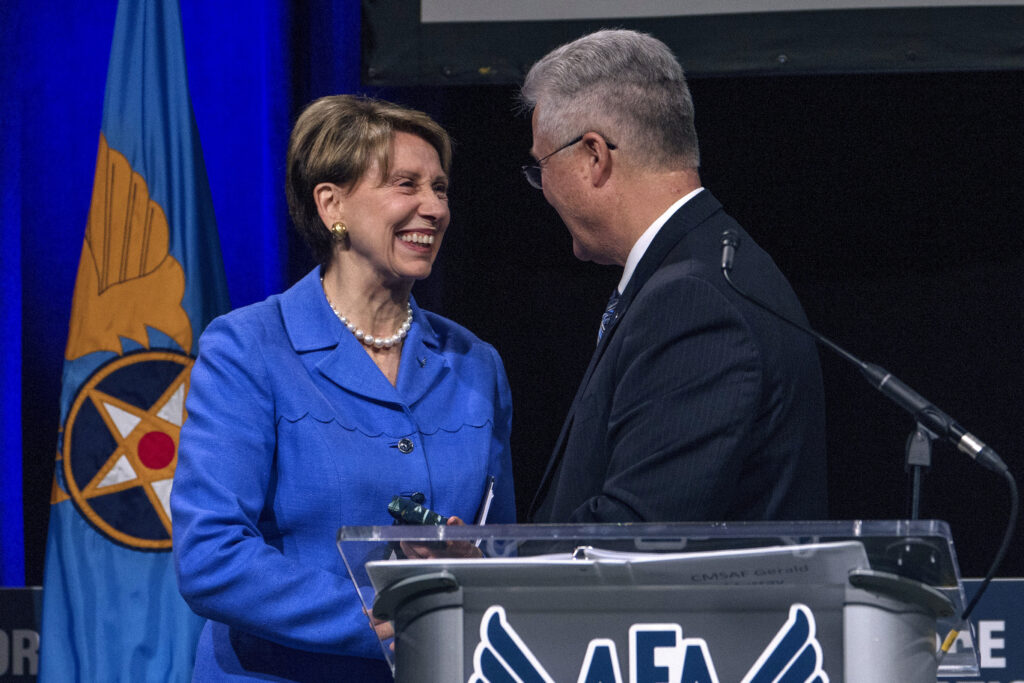 WASHINGTON: The Air Force continues to struggle both with figuring out how best to organize space acquisition authority and efforts to streamline rules to free the Space Force to more rapidly develop new capabilities, says Air Force Secretary Barbara Barrett.

“I’d like to say that we’ve got that resolved, but it’s not nearly resolved. And this is maybe the harshest fight there is. And one of the most important fights there is,” she told the kickoff session of Space Symposium 365, a virtual webinar series created by the Space Foundation to fill in for its iconic annual gathering in Colorado Springs that was cancelled due to the pandemic.

“You can’t build technology on a slow, lethargic acquisition system,” she added. “We’ve got to move fast.”

Barrett said service leaders are currently working on “building a coalition of support” for what she characterized as an acquisition approach “unlike any other” for Space Force that would slash red tape.

As Breaking D readers know, the Space Force is approaching its first birthday but DoD and the Air Force so far have not been able to reach agreement with the White House and Congress on how to rationalize the byzantine space acquisition decision-making process — one of the central problems the new service was created to fix.

Indeed, the Air Force still has not turned its space acquisition report in to Congress, due March 31. Required by the 2020 National Defense Authorization Act, it is supposed to explain how the service will establish a new, independent space acquisition authority within the Space Force.

But as Breaking D readers know, the Air Force (especially current service acquisition czar Will Roper) has been seeking ways to reshape that mandate.The service has interpreted the report (dubbed the Space Force Alternative Acquisition System in its most recent draft) as a mandate for upending what it sees as burdensome oversight provisions — causing some criticism even from Space Force supporters within Congress.

While it is almost impossible to assess exactly what the US spends on space systems because much of the annual budget is classified, in 2020 the Pentagon asked for slightly more than $11 billion in unclassified R&D and procurement spending (out of a total request for space activities of $14.1 billion), according to the Congressional Research Service. In 2021, DoD asked for a total space budget (including O&M) of $18 billion — $15.4 billion for the new Space Force, and the rest for Army, Navy and Missile Defense Agency space activities.

Those sums do not include the budgets for satellite programs developed and operated by the National Reconnaissance Office (NRO). Traditionally NRO’s budget has equalled or surpassed the unclassified space budget.

And the Space Force fully intends to pump up its budget in the coming fiscal year and beyond, Chief of Space Operations Gen. Jay Raymond told the symposium.

While demurring on exact figures, Raymond said that a jump in space investment should be expected. “Although the budget is not released and I can’t go into specifics of what may or may not be in the budget,” he said, “you’re gonna see a continued increase in importance placed on space. ”

Raymond noted that some changes to acquisition practices for the Space Force already have been approved by DoD (although other reforms envisioned will need congressional approval) — such as moving some contractual authorities that used to reside within the office of DoD acquisition czar Ellen Lord to SMC in Los Angeles.

“Just a few weeks ago, we took what’s called the ‘head of contracting’ authority from the Pentagon and the Secretary signed the letter [to] delegate that authority down to the acquisition experts in Los Angeles that do this work for a living,” he said. “Again, shortening that gap between approval authority and in those that are actually doing the work. We do not want our program managers having to manage depending on the Pentagon, we want to have program managers managing programs.”

However, Gen. DT Thompson, newly confirmed as Space Force vice chief, said earlier this month the service is still in the planning stages for Space Systems Command. The new command is meant to serve as an umbrella organization for (not, mind you, to actually absorb) the central space acquisition organization, the Space and Missile Systems Center (SMC), the Space Rapid Capabilities Office (SpRCO), the Air Force Research Laboratory’s space vehicles directorate, and, by law, DoD’s Space Development Agency (SDA). It also will eventually fold in some of the Navy and Army organizations responsible for space acquisition, he said.

Raymond said the Space Force also will focus over the next year to reshape its relationship with industry as part of its plans to “integrate” the new service into the national defense ecosystem writ large. The aim is to create a closer partnership with commercial firms to implement new ways of developing and manufacturing space-related systems — such as digital engineering and DevSecOps — that can speed development and reduce costs.

“If you look at the size of our force, and just the close relationship that we’re going to need with industry, we think there’s a model there that we can demonstrate,” he said. “We want to foster and be the model for partnership with industry, and we think in this year ahead as we work this integration phase that that we’ll be able to do this in a way that would be an example for others.”