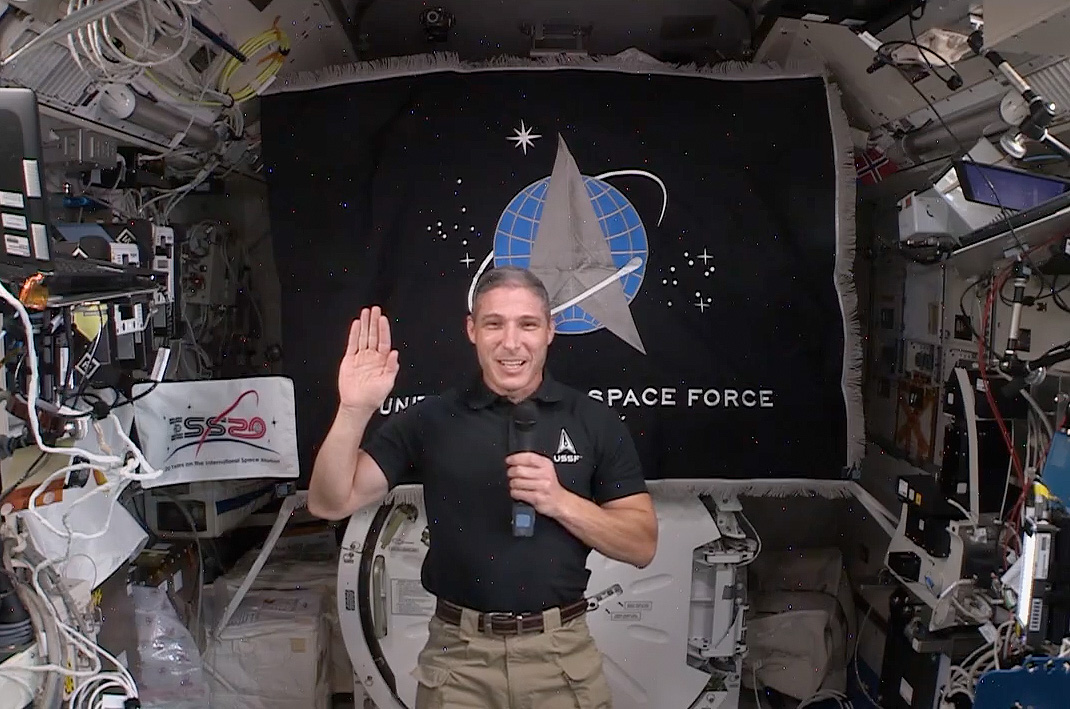 The U.S. Space Force has added its first astronaut to its ranks, newly named the “Guardians,” during a ceremony held from Earth orbit.

Col. Michael Hopkins, who has served for 27 years in the Air Force, voluntarily transferred to the Space Force, the sixth and newest branch of the U.S. military, on Friday (Dec. 18), while continuing to serve as a NASA astronaut, flight engineer and SpaceX spacecraft commander on board the International Space Station.

“This is a significant event,” Gen. Jay Raymond, Chief of Space Operations for the U.S. Space Force, said to Hopkins during a live video call from NASA Headquarters in Washington, D.C. “I know you have served many, many years in the United States Air Force, and this is a day not to be taken lightly. We greatly appreciate you volunteering to come over to be in the United States Space Force.”

‘Guardians’ of the galaxy: Space Force personnel get a name

Founded on Dec. 20, 2019, just two days shy of a year before Friday’s ceremony, the Space Force exists to “provide freedom of operation for the United States in, from, and to space” and “provide prompt and sustained space operations.” On Friday, the branch announced its service members will be known as “Guardians,” borrowing from a command motto of Air Force Space Command, “Guardians of the High Frontier.”

Raymond recognized Hopkins’ current role as unique to all Guardians to date.

“Today you will be the first Space Force astronaut [who] will be living in space. We are really glad to have you on our team,” he said.

Hopkins, floating inside the space station’s Japanese Kibo laboratory module with a large Space Force flag hanging behind him, said that he was ready “to make the leap” just before reciting the oath of enlistment.

“You also got the award for the best dressed astronaut on orbit, too. Love your shirt!” said Raymond, referring to Hopkins’ black short-sleeve polo displaying the U.S. Space Force logo on his chest.

After completing the transfer, Hopkins expressed his gratitude to his wife, Julie, and to the Secretary of the U.S. Air Force, Barbara Barrett, who joined Raymond at NASA Headquarters for the ceremony. Hopkins described his time in the Air Force as “an incredible experience” and said that it was now an honor to join the Space Force.

“I cannot say thank you enough for giving me an opportunity to join the newest branch of the military and also to join a unique, elite team that is going to be making history,” Hopkins told Raymond.

Related: The most dangerous space weapons ever

Hopkins earlier said that his decision to switch services came as a result of his experience working with what had been Air Force Space Command, but has now been transferred to the Space Force. “When the Space Force stood up, it was a natural question to ask what were the opportunities to come over,” he explained.

“I had the privilege of getting to know you at Air Force Space Command when you were the senior Air Force astronaut, and I’ll tell you, you have been nothing short of spectacular and we couldn’t be happier to have you on our team,” said Raymond.

Friday’s ceremony came 32 days into Hopkins’ second stay on the space station. A NASA astronaut since 2009, Hopkins previously launched on board a Russian Soyuz spacecraft for a 166-day expedition in 2014.

Hopkins’ current mission began with his launch aboard the first operational crewed flight of a SpaceX Dragon spacecraft. He is scheduled to remain on the space station through May 2021, when he and his three Crew-1 crewmates will return to a splashdown off the coast of Florida.

“Administrator Bridenstine, I would like to thank you for allowing those of us in the military to continue to serve our military branches and at the same time have the opportunity to be part of NASA’s unique and very exciting mission to explore our universe, to send the next people back to the moon and then on to Mars,” Hopkins told NASA Administrator Jim Bridenstine, who took part in the ceremony via video conference.

Since its first astronaut class in 1959, NASA has recruited test pilots and later other members of the U.S. military branches to join its corps. The first American in space, Alan Shepard, was a member of the U.S. Navy. He was followed by Virgil “Gus” Grissom, the first pilot from the U.S. Air Force to fly in space.

The first Marine Corps astronaut was John Glenn, who was also the first American to orbit Earth. Robert Stewart was the first to earn the Army’s Astronaut Badge flying on board the space shuttle. Bruce Melnick was the first Coast Guard aviator to launch into space.

“We are grateful for so many years of military personnel, Army, Navy, Air Force, Marines, Coast Guard, and now we’re talking about the sixth branch of the military, the Space Force,” said Bridenstine. “Right now, we have 60% of our astronaut corps that come from the military. Thirty-five percent of the astronaut corps are currently active duty military personnel, men and women doing great work on behalf of their country, leading a science organization and at the same time being in military service.”

At least one other member of NASA’s active astronaut corps, Air Force Col. Nick Hague, has also requested to transfer to the Space Force.

“You are the first member of the U.S. Space Force to serve on the International Space Station, but it is a guarantee that you will not be the last,” Bridenstine told Hopkins.