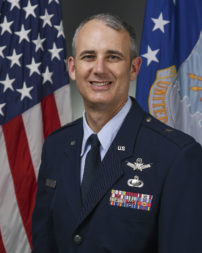 Since June 2017, Cothern was respon­si­ble for F‑35 fight­er mod­ern­iza­tion activ­i­ties. But much of his career was focused on space. He served as the direc­tor of the Department of Defense’s Space Test Program and the Air Force’s Hosted Payloads Office. As STP direc­tor he also led the Rocket Systems Launch Program, where he was mis­sion direc­tor for the DoD’s first SpaceX Falcon 9 launch that flew NASA and National Oceanic and Atmospheric Administration DSCOVR satel­lite in February 2015.