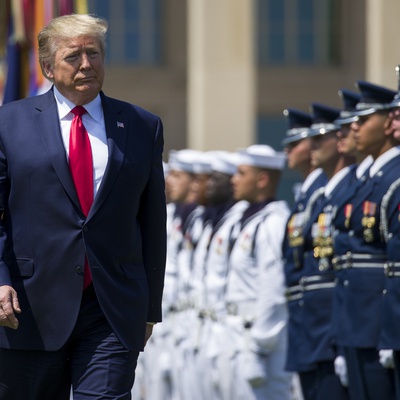 Despite losing reelection, President Trump is plowing ahead with plans to release this month a detailed Pentagon budget for the next fiscal year, plumping up proposed 2022 funding for its key defense priorities in what budget analysts say is an obvious and unorthodox effort to box in President-elect Joe Biden.

Most of the additional funds that administration officials at the White House’s Office of Management and Budget, or OMB, are demanding that the Pentagon add to its budget request, are “fabricated,” if not outright impossible given America’s modest GDP growth and growing national debt, said one defense official involved in crafting the budget plans who was not authorized to speak publicly. Biden will submit his own budget once he is in office, and the Trump administration’s will be mooted, officially.

The lame-duck administration’s unusually detailed request instead “is designed to create a fake appearance of generosity to fund Defense priorities” that will “set [the Trump administration] up to be able to heckle the Biden administration from the sidelines for all of the inevitable reductions that will be made when we redo the budget in January [or] February, and in subsequent years,” that person said.

Building a Pentagon budget is a year-long process. The Pentagon submits multiple drafts to the White House, and OMB replies with the president’s desired edits, known as “passbacks,” which are incorporated into the final budget request eventually submitted to Congress. In presidential transitions dating back to at least 1992, the outgoing administration would turn over the prior years’ work to the incoming team, without publicly releasing it, in what is a bit of a gentleman’s agreement to let the new president tailor it to his own priorities. In early 2020, the Pentagon moved up its internal planning deadlines in an effort to improve the yearly process. After Trump’s apparent Election Day loss, the White House defiantly directed the Pentagon and other federal agencies to proceed with planning next year’s budget request anyway.

A copy of the most recent passback, obtained by Defense One, sheds light on specific avenues of attack Trump officials and supporters may launch when Biden submits his budget request early next year. The total budget — $722 billion — is in line the Trump administration’s five-year defense spending projections released earlier this year. But many of the most controversial defense spending and policy choices of the Trump administration are specifically addressed.

Among other things, the document shows a White House demand to “zero out” all funding for the counter-ISIS fight by 2022. It calls on the Defense Department to allocate funding to “determine new sites for EUCOM, SOCEUR, AFRICOM, SOCAF, and any other NATO moves” — referencing combatant and component commands for troops in Europe and Africa, currently located in Germany, where Trump controversially ordered a withdrawal of U.S. troops earlier this year, and where the Army last month ordered its commands to be combined and reorganized. It calls for a military pay raise, a favored, if exaggerated, political boast of the president’s. And it would grow the Space Force, the newest service branch of the military created under Trump.

“It’s a ludicrous exercise, but its purpose is political, not planning,” said Gordon Adams, who ran defense budgeting during the Clinton administration and worked on President Barack Obama’s transition team. “What it allows the Republicans on the Hill to do is to claim that whatever Biden comes up with is a reduction from what the Pentagon should have. So they’re really setting up a political argument.”

A key architect of this budget maneuvering is National Security Advisor Robert O’Brien, defense and administration officials say. Many of the OMB directives offer deeply specific prescriptions for Navy funding, a pet interest of O’Brien, who authored a series of wonkish columns on Navy policy gathered in his 2016 book While America Slept.

Longtime watchers of the budget process say the administration is taking an unprecedented step — at least in recent years — by creating such a detailed budget plan on its way out of the door. None of the last four presidents — George H.W. Bush, Bill Clinton, George W. Bush, and Barack Obama — submitted a budget in the waning days of their presidency.

“All [administrations] come in and get a finished budget handed to them, which they then make changes to. It’s just normally one doesn’t see the ‘draft’ one,” said a congressional aide, who called the move a “stunt.”

What Does OMB Want?

Even prior to Election Day, the Pentagon was pushing to finish the 2022 budget earlier than normal.

The draft OMB passback, dated Nov. 27 with a deadline for responses of Dec. 1, is hardly the final word on what Trump’s parting-shot budget may include. Pentagon officials are now preparing responses to specific OMB requests. And much of it is likely dead on arrival come Jan. 20 when Biden is inaugurated.

The proposed budget “seeks to achieve Administration objectives within the topline guidance by protecting strategic priorities and identifying savings and offsets to reallocate to higher priorities,” the document states. “[The proposal] recommends increases for key Administration priorities, including shipbuilding, missile defense, the defense industrial base, and other investments focused on Great Power competition and, in particular, countering China.”

Trump’s proposed $722 billion for the Pentagon is 2 percent higher than the military requested in current fiscal 2021, according to other internal documents reviewed by Defense One, but in line with what defense officials projected earlier this year when they sent their fiscal 2021 spending request to Congress. That total does not include additional national security money within the Energy Department and other federal agency budgets.

In the passback, the White House orders the Pentagon to spend billions of dollars more on missile defense and to “accelerate development and testing” of interceptors that could counter fast-flying hypersonic weapons.

It also called for the Pentagon to spend at least $150 million to demonstrate the “Mobile Intermediate Range Missile.”

The OMB document includes several spending increases to Navy projects. O’Brien has pushed for a larger Navy, largely to bolster American forces in the Pacific to deter China, as had Mark Esper during his tenure as defense secretary. The Trump administration directs the Navy to overhaul five guided missile cruisers and two fast-attack submarines that it had planned to retire over the next five years. In all, the overhauls would cost the Navy $2.6 billion over that same period. The White House also directed the Navy to “assess all Large Surface Combatants for maximum life extension opportunities.” It also wants the Navy to spend $5 million “for a feasibility study to place naval activities on American Samoa.”

The Pentagon should increase spending on artificial intelligence, biotechnology and quantum information science research and development, OMB said in the passback.

It also instructs the Pentagon to conduct “site surveys to determine new sites” for troops based in Europe and Africa.

“In order to assess the underutilized domestic infrastructure which could support the accelerated return of 6,400 personnel to U.S. bases with minimal military construction investments, please provide [the Office of Management and Budget] a copy of the force structure plans and infrastructure capabilities…no later than December 7, 2020,” the document states.

OMB also orders a cap on F-35 stealth fighter buys at 85 jets per year. If the program needs more money due to cost increases, the Pentagon must cut the number of jets it intends to buy, the budgeting office said. The White House also asks for an analysis of how the F-35 and other warplanes would fare in a war with China between 2030 and 2040.

“[R]eductions to the planned fleet must be based on a strategic risk and capability analysis of the need for the F-35 in the most stressing contingency and that such an analysis is vital to obtain support for any proposed reductions to the fleet,” the document states.

OMB also ordered $2.3 billion in cuts to the Army and $2.5 billion in cuts to Air Force operations and maintenance. The proposal also includes a 2.7 percent military pay raise in fiscal 2022 and proposes boosting the size of the Space Force, while cutting 5,000 active-duty Army soldiers.

“The Army should adjust its end strength levels in accordance with reductions in presence that the Administration has made in [the Middle East] and [Europe],” the document states.

The passback also gives previously unreported insight into the Pentagon’s priorities, some of which may outlast Trump. It reveals that, under Trump, the Pentagon wants to reduce its role in counter-drug support to other federal agencies and local law enforcement.

“OMB denies the proposed elimination of funding for the National Guard [counter-drug] Schools and reserve personnel intelligence analysis support to Federal law enforcement agencies,” the document reads. “If DOD would like to continue to pursue the elimination or transfer of CD activities in future budget cycles, OMB encourages DOD to fully coordinate proposals with impacted Federal agencies and submit such proposals to OMB in advance of agencies’ annual budget submissions to OMB.”